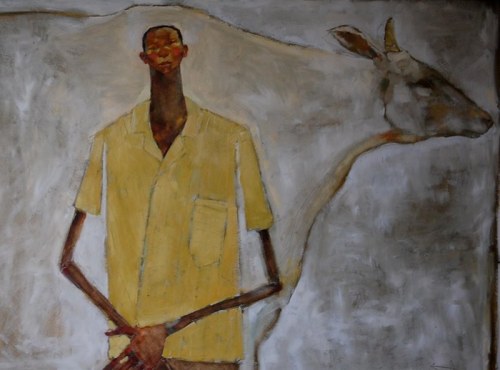 The following opinion piece by Jimmy Smith, director general of the International Livestock Research Institute (ILRI), is reprinted from The Economist‘s Insights, The Meat We Eat, the Lives We Lift, where it was published on 23 Feb 2015.

Talk of livestock these days is tinged with foreboding. We hear that livestock are bad for the environment, that they are a major source of greenhouse gas emissions, that red meat is a factor in the global obesity epidemic, leading to public health crises. These concerns are legitimate. But they should not—must not—obscure the central importance of livestock to the livelihoods, health and well-being of some three billion people, many of whom are among the poorest on the planet.

Nor must they detract from opportunities within the livestock sector – one of the fastest growing of all agricultural sectors – to address environmental, health, nutrition and food security challenges on a global scale. In fact, these problems are unlikely to be solved if livestock are excluded.

Consider the ongoing debate over the proper role of meat in our diets. Rarely in this discussion is a clear distinction drawn between the relatively rich people who make poor food choices (including over-consuming red meat and other rich foods) and the many poor people who basically have no food choices at all. And certainly not a choice of meat, which often is unaffordable, even though it could make a tremendous difference to their nutritional wellbeing.

It can feel almost heretical to remind people in rich countries that in most of the developing world both livestock production and consumption remain central to the lives and livelihoods of more than one billion people living on less than US$2 a day, which is more than the populations of the United States and European Union combined.

For this large swath of humanity, animal agriculture provides a reliable and nourishing source of food for their communities and a means of generating regular household income. Livestock owners of the South typically have only one or two cows or a small herd of goats or sheep. It would be absurd to encourage them to abandon their livestock and livestock-based livelihoods. Instead, the focus should be on improving the health and productivity of their animals and expanding access to market opportunities. Livestock can be a critical foundation for improving rural livelihoods, transforming rural economies, and feeding the South’s rapidly growing urban populations, hungry for the essential protein and nutrients contained in milk, meat and eggs.

Even a small daily portion of animal protein—a piece of meat the size of a deck of cards, for example—can change the lives of the world’s one billion undernourished people and the two billion vulnerable to food shortages. Such a modest amount can help end the maternal malnutrition that contributes to an estimated 800,000 infant deaths a year and the child undernutrition that contributes to nearly half of all deaths of children under-five worldwide.

Meanwhile, researchers have shown that small but important changes in livestock breeding can provide cattle that would help poor dairy producers in East Africa increase their production per animal up to a whopping 300 per cent. Similar opportunities abound in the informal ‘backyard’ poultry production operations that already are a major source of food and income for poor people in sub-Saharan Africa and Asia. And it can be done with an eye toward health and safety and without resorting to the industrial approach common in developed countries.

Livestock greenhouse gases are a legitimate concern, as they comprise about 14.5 per cent of such human-induced emissions. Herein also lies a huge opportunity: livestock’s contribution to climate change can be significantly reduced by improving the diets of cattle and other ruminant farm animals in developing countries, which subsist today largely on grass and crop ‘residues’—the stalks and leaves of crops that remain after their grain has been harvested. Providing affordable, more digestible feeds—and not grains that people consume—would address a key reason livestock in the developing world produce more gas per unit of product than their cousins in wealthy countries: poor diets. With cattle accounting for about 65 per cent of livestock greenhouse gas emissions today, farmers of the South can also reduce their emissions by focusing on the most appropriate animals for given environments and circumstances—such as more small ruminants, like goats, in drylands and more pig and poultry in other agro-ecological regions.

We also can confront the widely diverging levels of consumption of livestock products. The recommended amount is about 90 grams (three ounces) of meat per day. On a per capita basis, US consumers typically eat three times that amount while consumers in Botswana eat less than half. By 2050, the UK Department of Energy and Climate Change sees a potential to save up to 15 gigatons of CO2 –twice the annual greenhouse gas emissions generated by today’s total global livestock sector—if everyone in the world adopted the daily diet recommended by the World Health Organization. Doing this, of course, would require some of us to cut back on our daily intake of animal-source foods and others to improve their nutrition by consuming more.

So what does all this mean? It means farm animals are very different the world over—valued most in rich countries for the food they produce and in poor countries most for the livelihoods and incomes they provide. Embracing such diverse perspectives will help us help solve the problems livestock present today while enhancing the many—and many unacknowledged—benefits they provide.

One thought on “The meat we eat, the lives we lift–Opinion by ILRI director general Jimmy Smith”