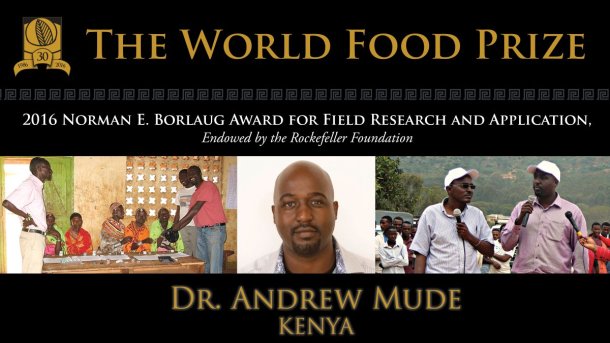 Andrew Mude, a principal research scientist
at the International Livestock Research Institute (ILRI), in Nairobi, Kenya,
was yesterday named the 5th recipient of a prestigious award
for his work in providing insurance to livestock herders
in East Africa’s drylands through innovative, state-of-the-art technologies.

It was announced yesterday (30 Aug 2016) in Nairobi, Kenya, that Andrew Mude has won the 2016 Norman Borlaug Award for Field Research and Application. Mude’s is developing insurance for never-before-insured communities whose livelihoods depend on herding cattle, goats, sheep and camels in the remote, arid and drought-prone lowlands of the Horn of Africa. He and his colleagues have made novel use of satellite data to achieve an innovative and highly effective solution that helps pastoral livestock herders reduce the considerable and costly drought-risk they face in this region.

At an event hosted by Director General Jimmy Smith of the International Livestock Research Institute (ILRI) in Nairobi, Kenya, Mude’s selection as the winner of the 2016 Borlaug Field Award for individuals under the age of 40 was made by Ambassador Kenneth Quinn, president of the World Food Prize Foundation, which is headquartered in Des Moines, Iowa. The field award is endowed by the Rockefeller Foundation.

Dr Mude reflects Borlaug-like persistence in his science-based, community-mediated and innovative approach to providing financial protection, through insurance, to millions of poor herders and their families who care for and depend upon their livestock as they move across the vast rangelands of East Africa.

It should be a matter of great pride for Kenya that two of the first five Borlaug Field Award recipients are Kenyans.

Charity Mutegi, a food scientist and also of Kenya, received the award in 2013. Mutegi coordinates an Aflasafe project in Kenya protecting consumers from aflatoxin contamination of foodstuffs; Aflasafe is led by the International Institute for Tropical Agriculture (IITA).

ILRI’s Andrew Mude will be formally presented with USD10,000 and the ‘Norman Borlaug Award for Field Research and Application, Endowed by the Rockefeller Foundation’, in a special ceremony on 12 Oct 2016, in which Rockefeller Foundation President Judith Rodin will participate, in Des Moines, Iowa, USA, as part of the 2016 World Food Prize international symposium.

A Kenyan native who received his PhD from Cornell University, 39-year-old Mude is a principal economist at ILRI, a CGIAR research centre. He spearheads a program called ‘Index-Based Livestock Insurance’ (IBLI), which is greatly reducing the vulnerability of East Africa’s livestock herding families to recurring droughts, which kill great numbers of livestock, sending many hungry households in remote regions into deep and lasting poverty.

Since launching IBLI in 2008, Mude and his team have engaged local herders and leaders in building and delivering extension education programs—employing, in addition to traditional communications and training materials, videos, cartoons, radio broadcasts as well as e-learning platforms and ‘gamifications’ for insurance sales agents—to increase understanding of the principles, coverage and marketing of the insurance plans.

Before Mude’s innovative approach was implemented, African herders had no access to livestock insurance. It was highly impractical and costly for insurance claim adjusters to travel through East Africa to confirm dead animals and pay claims. IBLI eliminates the need for such visual confirmation of stock losses by using satellite data to monitor grazing conditions. When these conditions are seen to fall below a certain threshold, these data serve as a proxy for dead animals and insurance payouts are made.

By early 2016, 11,800 IBLI contracts had been sold (representing an insured livestock value of USD5,350,000) and USD149,007 indemnity payments made to insured pastoralists. In future, more than 50 million pastoralists across Africa are expected to have an opportunity to benefit from this financial technology.

Dr Mude represents the type of citizen-servant we as a government are proud to partner with. He is a citizen dedicated to helping grow the productivity and welfare of the Kenyan people.

It’s because of Andrew Mude’s passion, commitment and technical competence that we’re now planning to replicate this novel insurance scheme across all of northern Kenya, where some 4 million pastoralists depend primarily on livestock.

—Willy Bett, Cabinet Secretary in the Kenya Ministry of Agriculture, Livestock and Fisheries

Dr Mude’s Index-Based Livestock Insurance program is a remarkable example of the innovative, market-driven solutions that develop when countries invest in quality education for young people.

With today’s changing climate, weather-based insurance has become a critical tool in building the resilience of some of the world’s most vulnerable populations. By utilizing the most current technology, Dr Mude’s innovation is helping pastoralist livestock herders to protect their livelihoods.

We can provide farmers with no better form of food security than by empowering them to protect themselves from the impacts of climate change.

We have the satellite technology needed to monitor grazing conditions in the remotest of regions. We should be using it to ensure that Africa’s remote livestock herders have access to basic insurance farmers around the world take for granted.

We draw inspiration from Norman Borlaug’s lifelong commitment to make his agricultural research make a difference.

Together with many partners and the herders themselves—and only together—we’re determined to find new ways to help millions of people continue to practice the oldest form of sustainable food production the world has ever seen.

And in Ethiopia, Kenya’s neighbour to the north, a government pilot project spearheaded by Mude’s team is working to scale out this insurance program while the World Food Program is making IBLI-type insurance a key pillar of its food security strategy in Ethiopia’s pastoralist lowlands. Other governments and development agencies are seeking help in testing IBLI-type policies across West Africa’s Sahel and the drylands of southern Africa.

‘Take it to the farmer’ are reported to be the last words uttered by Norman Borlaug before he died.

Andrew Mude and his team, working with the Kenya and Ethiopian governments, insurance agencies and others, have taken Borlaug’s injunction to heart, and are taking it even further—to thousands of individual pastoralists raising and herding their animal stock across the vast, remote and generally inhospitable drylands of the Horn of Africa.

About the Norman Borlaug award for Field Research and Application
An independent jury of experts chaired by Dr Ronnie Coffman selected Dr Mude from an impressive group of candidates who were evaluated based on the attributes and accomplishments that reflect those demonstrated by Dr Norman Borlaug during his work at the Rockefeller Foundation and as a scientist with the International Maize and Wheat Improvement Center (CIMMYT) in developing high-yielding, disease-resistant wheat in Mexico and introducing adaptable wheat varieties into India and Pakistan during the 1950s and 60s, for which he received the Nobel Peace Prize in 1970. More details at www.worldfoodprize.org/borlaugfieldaward/

About the World Food Prize
The World Food Prize was created in 1986 by Nobel Peace Prize Laureate Dr Norman Borlaug. It is the foremost international award recognizing individuals whose achievements have advanced human development by increasing the quality, quantity or availability of food in the world. The prize was endowed by the Ruan family of Des Moines, Iowa. Businessman John Ruan III now serves as chairman of the foundation and Ambassador Kenneth M Quinn, former US ambassador to Cambodia, is the president of the organization. A selection committee of experts from around the world oversees the nomination and selection process and is chaired by Prof MS Swaminathan, of India, who was also honoured as the first World Food Prize Laureate. Other past prize winners include former President of Ghana John Kufour, US senators Bob Dole and George McGovern, Nobel Peace Prize Laureate Dr Muhammad Yunus, Professor Yuan Longping of China and former Executive Director of the United Nations World Food Programme Catherine Bertini.