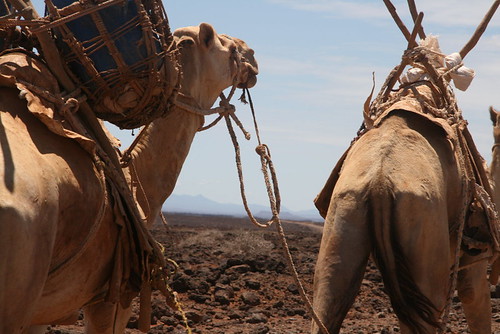 Part of a large camel herd in northern Kenya; on the outskirts of Marsabit and Moyale, the average distances to watering points run into dozens of kilometres (photo credit: Ann Weru/IRIN).

Two new papers on MERS coronavirus and camels in Eastern Africa have been published in the science journal Emerging Infectious Diseases.

Middle East respiratory syndrome: Camel-to-human transmission
The Middle East respiratory syndrome coronavirus (or MERS-CoV) was first discovered in a Saudi Arabian patient in 2012 and, as of 23 July 2014, had infected 837 people, killing 291 (World Health Organisation [WHO]). Almost all of the reported cases have been linked to the Arabian Peninsula (US Centers for Disease Control). There is currently no cure or vaccine for MERS—a severe respiratory disease that causes cough, fever, shortness of breath, and can lead to pneumonia and kidney failure.

Studies are finding that dromedary camels can harbour the MERS-CoV, and camels infected with MERS have been reported from Qatar, the Kingdom of Saudi Arabia (KSA), and Egypt. Camels carrying antibodies to MERS—an indicator that the animals have been exposed to the virus or a similar virus variant—have been found in Egypt, Jordan, KSA, Oman, Qatar, Spain and United Arab Emirates.

The similarity between MERS found in camels and in people suggests that camels may provide a primary source of infection for people. The majority of livestock camels slaughtered on the Arabian Peninsula are imported from the Greater Horn of Africa, in particular Ethiopia, Kenya, Somalia and Sudan.

New studies of MERS in camels in East Africa
To improve our knowledge of the prevalence of MERS-CoV in camels, the research group of Christian Drosten from the University of Bonn, in Germany, and collaborators from the International Livestock Research Institute (ILRI) and Kenyan partners studied the prevalence of antibodies to the MERS virus in camels in Kenya. Their studies were published in the journal Emerging Infectious Diseases. 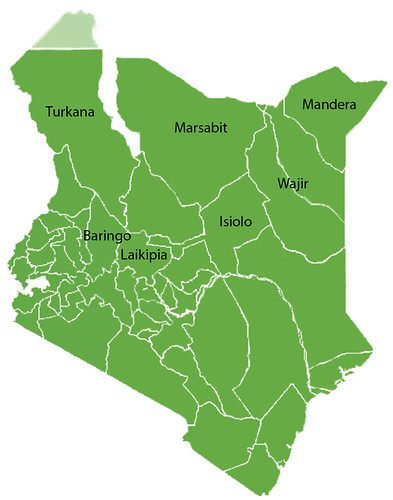 In the first study, the scientists investigated MERS-CoV antibody levels and patterns of seroprevalence in farmed and nomadic camels in Kenya. Serum samples that were obtained from 1992 through 2013 from 774 camels in seven Kenyan counties (Baringo, Isiolo, Laikipia, Mandera, Marsabit, Turkana and Wajir) were examined in the first study. Ethical clearance for the collection was part of the overarching agreement between ILRI and the Government of Kenya, which authorizes ILRI to broadly investigate livestock disease in Kenya.

Camels with MERS-CoV antibodies were found in all regions and during the full 20-year sampling period. With the exception of one county, serum prevalence of MERS-CoV antibody levels was generally higher in camels from the northeastern and eastern counties than the counties in the northwestern Rift Valley area. Interestingly, 28 camels originating from the northeastern Wajir County but held in isolation in the Rift Valley since 1998 did not have MERS-CoV antibodies. This corresponds with a previous observation that camels bred in isolation in Dubai also lacked antibodies. The antibody levels of nomadic animals from the eastern region were significantly higher than in pastoral animals from the Rift Valley region. Adult animals in both regions had a 7–10 per cent higher level of infection than juveniles.

The first study proposed that young immunologically naïve animals (those with no evidence of previous exposure to the coronavirus) may spread the virus in camel populations and that MERS-CoV infections increase when camel population density increases.

Different types of animal husbandry in different counties may also be an important predictor of transmission. Camels in this area are often nomadic and are taken across borders into neighbouring countries such as Ethiopia for trade purposes. The observed rise in infection rates from Northwest to Northeast and East could be attributed to an increased animal-to-animal contact as the migration paths merge and cross.

In the second study, samples from 189 camels in Egypt, Somalia and Sudan that had been collected and stored over the past 30 years were tested for MERS-CoV antibodies. In all, 84 per cent of all camels tested positive, a finding that supports conclusions from previous studies.

In short, the combination of nomadic camel husbandry with a high-population density of camels, along with the presence of younger virus-susceptible camels, could increase the overall levels of the virus in regional camel populations and also increase the likelihood of virus transmission to humans.

That no human MERS cases have been observed in East Africa could indicate either that the virus is not as virulent in the region or that there is a lack of detection and reporting of cases. More research, focusing on people handling camels and consuming camel milk in this region, could help to determine whether there have been silent or unrecognized infections.

As the MERS outbreak continues, the WHO’s Emergency Committee addressing the MERS outbreak urged that WHO and member states improve national policies that address infection prevention and control, and then implement those policies in health care facilities and systems. Critical investigations should be initiated and accelerated, vulnerable countries should be supported, and better communications should be embraced to strengthen collaboration between all parties fighting the outbreak as well as to disseminate advice and warnings to the general public.

Dan Klotz is a Washington DC-based science writer and policy analyst; he also serves as a senior consulting writer for Burness Communications.