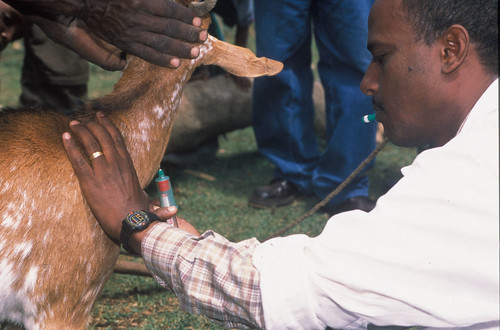 With colleagues from the Jenner and Pirbright institutes in the UK, Nairobi’s Strathmore University and institutions in Saudi Arabia and Spain, scientists and technicians in a vaccine biosciences program of the International Livestock Research Institute (ILRI) in Nairobi, Kenya, have recently published a paper in Nature Scientific Reports announcing a breakthrough in development of a ‘One Health’ vaccine that could protect both people and livestock from Rift Valley fever.

One of ILRI’s co-authors of the paper, Vish Nene, who leads the institute’s Vaccine Biosciences program, explains the significance of the study: ‘This study demonstrated that a single-dose immunization in several species mediated protection against Rift Valley fever, with no presence of the virus in the blood. We still have additional questions that need to be answered, such as will the vaccine also be efficacious under field conditions. And a pressing issue that regulatory authorities will need to address relate to registration requirements for recombinant vaccines.’

Our findings add value to the ChAdOx1 vaccine platform and support its application in developing experimental vaccines against other viral diseases, especially where candidate viral vaccine antigens are known.

The platform provides a rapid ability to respond to new viral threats and to archive them in a vaccine bank. The ChAdOX1 platform is also being used in human vaccine trials.

The ability to demonstrate safety and efficacy in animals to protect against zoonotic diseases, which are transmitted from animals to people, and to use the same experimental vaccine in human trials has obvious advantages.

Abstract
‘Rift Valley Fever virus (RVFV) causes recurrent outbreaks of acute life-threatening human and livestock illness in Africa and the Arabian Peninsula. No licensed vaccines are currently available for humans and those widely used in livestock have major safety concerns. A ‘One Health’ vaccine development approach, in which the same vaccine is co-developed for multiple susceptible species, is an attractive strategy for RVFV. Here, we utilized a replication-deficient chimpanzee adenovirus vaccine platform with an established human and livestock safety profile, ChAdOx1, to develop a vaccine for use against RVFV in both livestock and humans. We show that single-dose immunization with ChAdOx1-GnGc vaccine, encoding RVFV envelope glycoproteins, elicits high-titre RVFV-neutralizing antibody and provides solid protection against RVFV challenge in the most susceptible natural target species of the virus-sheep, goats and cattle. In addition we demonstrate induction of RVFV-neutralizing antibody by ChAdOx1-GnGc vaccination in dromedary camels, further illustrating the potency of replication-deficient chimpanzee adenovirus vaccine platforms. Thus, ChAdOx1-GnGc warrants evaluation in human clinical trials and could potentially address the unmet human and livestock vaccine needs.

Introduction
‘RVFV, a negative-stranded RNA virus in the Bunyaviridae family, is listed as an emerging zoonotic Category A viral pathogen in the National Institute for Allergy and Infectious Diseases (NIAID) list of priority pathogens for biodefense research. The disease, Rift Valley Fever, has serious implications for livestock agriculture and trade and is also listed as a notifiable disease by the World Organization for Animal Health (OIE). Although primarily restricted to Africa, the virus can be transmitted by at least ten mosquito species that are more widely distributed than RVFV leading to concerns of disease spread, as has occurred in the Arabian Peninsula and Madagascar. Humans can also get infected through contact with virus-contaminated tissues and fluid.

‘Due to its epizootic nature related to heavy rainfall and flooding, Rift Valley Fever is a difficult disease to study. It is thought that successive and overlapping swarms of different mosquitos infect and amplify infection rates in ruminants with subsequent transmission to humans, resulting in epidemics. The high levels of human morbidity and mortality during the last major outbreak in 2006/7 in eastern Africa underscores the urgency of developing comprehensive surveillance, response and control programs, especially since there is growing evidence for inter-epidemic transmission of RVFV.

‘Rift Valley Fever causes high rates (>90%) of mortality in young ruminants, primarily sheep, goats and cattle. Although older animals are more resistant to disease, high rates of abortion (so-called “abortion storms”) are observed following RVFV infection in pregnant animals and this is often used as a warning sign of imminent human disease epidemics. Unlike other domestic ruminants, RVFV infection in dromedary camels tends to be mild or inapparent, with abortion among pregnant animals being the only clinical sign. However, severe clinical signs, including haemorrhagic septicaemia and sudden death, have been observed among infected dromedary camels in Mauritania. In humans RVFV infection presents as an acute self-limiting febrile illness, but severe manifestations, including haemorrhagic fever and encephalitis, also occur, with case fatality rates >30% reported in some outbreaks, and long-term sequelae (e.g. impaired vision) in some survivors. Live and inactivated RVFV vaccines are available for livestock, but no licensed vaccines or anti-viral therapies are currently available for humans. . . .

Replication-defective chimpanzee adenoviruses (ChAd) are among the most promising human vaccine platforms available. . . . Their use as a common vaccine development platform has the advantage of allowing multiple vaccines to be biomanufactured rapidly with standardized processes and low cost of goods. . . .

In summary we have demonstrated the utility of the replication-deficient chimpanzee adenovirus platform in induction of functional antibody and protective immunity against RVFV in multiple target livestock species in a disease-endemic setting.

Larger field efficacy and dose optimization studies of ChAdOx1-GnGc in animals of different age groups and physiological status will be required to underpin its future licensure and general use in livestock, and to explore potential inter-species differences in vaccine-elicited immune responses. . . .’

This work was conducted with the support from the University of Oxford, a Wellcome Trust fellowship and a grant from the Bill & Melinda Gates Foundation through its Grand Challenges Exploration Initiative.