Smith was in Australia for public addresses and meetings on the critical role of livestock in global food and nutrition security. In his talks, he countered some of the simplistic solutions to sustainability and health suggested for the livestock sector. Here’s some of what he had to say.

There is no moral equivalence between those who make bad food choices and consume too much animal-source food, and those many hungry people who, with no food choice at all, consume far too little.

The livestock sector is under pressure from those in rich countries and communities who say that to save our planet we must get rid of livestock, or that to save our health, we must stop eating meat. Some of us probably do consume too much meat as well as sugars, fats and highly processed foods and I have no argument with those advocating not over-consuming such foods.

I do argue strongly against those who say that those who eat so little meat should eat even less.

What will help raise livestock productivity by smallholder farmers and herders in low-income countries, while also reducing greenhouse gas emissions and other environmental harms, are today’s many scientific advances in such fields as livestock genetics, breeding, feeding and nutrition. Many of these come from Australia, which shares much of the sub-humid and semi-arid agro-ecologies of the developing nations of the world. 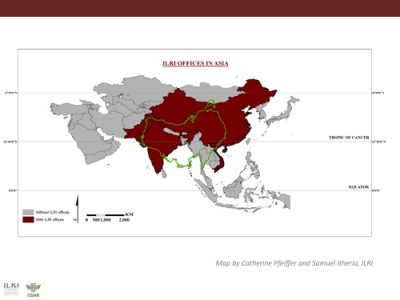 The central importance of livestock in the developing world is going to continue because per capita consumption of animal-source foods there is still low.

Consumption of meat in Africa, for example, is just 13 kg per person per year, while in Australia, it’s closer to 100 or more kg.

Livestock contribute not only by ensuring that enough food is produced, but also by helping to balance nutrient consumption and to diversify diets. There is also the income, manure and ploughing that animals provide, which contribute directly to crop production and form part of the income, food and nutritional equation for the poor.

Employment in the livestock sector—through opportunities in producing, processing and selling animals and their products, as well as in the provision of inputs and services that will underpin sectoral transformation—also offers major opportunities for addressing the ‘youth bulge’ in poor countries. Africa’s 19–25-year-olds, for example, are a large percentage of the continent’s total population and how they will all find employment is very important for national peace and prosperity.

ILRI and our partners in Australia and around the world believe we must do more to help men, women and young people to grasp opportunities to help meet the rising demand for animal-source foods and to encourage the transition of nearly a billion people from being smallholders to ‘smartholders’.