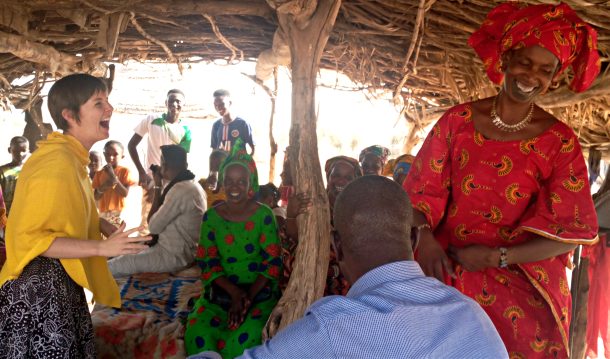 If there were no language barriers, what would research be like, I wonder?

I’m a gender researcher working on a project to control peste des petits ruminants (PPR), a disease that afflicts sheep and goats across Africa, the Near and Middle East and southwest Asia. Women in these regions typically play important roles in rearing sheep and goats. My project operates across six African countries, the populations of which speak four official languages and several more local languages.

As part of a research team, I recently met with Fulani pastoralists in Senegal to ask questions about the occurrence of livestock diseases, how the herders address these diseases, and what roles different household members play in caring for sheep and goats. Our research team members spoke French, Wolof and other languages. Most of the pastoralists spoke Pulaar, with a few teenage boys speaking some French.

With more than 30 people sitting under a shade structure in the midday sun, our single translator had a lot of work. He had to translate our research questions in French into Pulaar, then translate the many responses and conversations back into French so we could take notes.

While we sometimes conduct meetings with men and women separately, on this occasion it was important for us to get a consensus from members of the community at one time. I was particularly interested in the women’s responses to our questions. They often spoke among themselves as opposed to the more assertive men, who spoke up and addressed the whole group assembled. Our translator was skilled, but he spent more time translating the men’s responses than the women’s. I often found myself interjecting, ‘But what are the women saying? Look, they are really excited about something!’ The translator would then dutifully move toward the women and translate a nugget of information from them.

For example, the women listed pasteurellosis, a disease of small ruminants that often affects young animals, at the top of their disease list, whereas the men prioritized other diseases. Fulani women and children are often responsible for caring for young animals, so it makes sense they would consider this disease a first priority. The women soon noticed I was paying them extra attention, and without a common language, we soon started making faces at each other when the translator would get very busy with the men.

At the end of the formal meeting, with our translator finally off duty, we all shared a meal of spicy rice, meat and sweet mint tea. Another West African colleague, who also doesn’t speak Pulaar, pulled out his phone to show us a short video of people eating wriggling, uncooked fish in China. Eating live fish was something foreign to all of us and we all laughed with surprise. One of the women decided I should dance with her and everyone laughed as I tried to imitate her. It felt good to share brief moments of connection with this group of pastoralists without the need for a common language or translator.

Language barriers make international research challenging, but overcoming them, even when we know translation is less than perfect, is our obligation. Often when we speak with farmers and pastoralists, they ask us how they benefit from participating in research projects. When are we going to bring the vaccines they need or the solutions to the problems they describe? We tell them the truth—our research is a way to collect the voices of regular people and deliver their views to decision-makers in formats likely to influence those decision-makers. By listening to many pastoral voices and translating what we hear into major languages of the world, and by incorporating these ‘on-the-ground’ views and information in messages for the media, in policy reports and in research papers, we try to bridge gaps between pastoralists and policymakers.

But on this and similar occasions, I have wondered what our international agricultural research would be like if we researchers and the farmers/herders we work with and for could all understand each other perfectly. In the meantime, my colleagues and I will have to make do with connecting through the mediating work of translators—and, not least, some shared laughter.