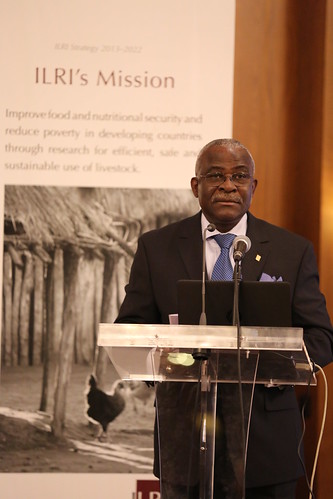 This week (6–7 Nov 2014), the International Livestock Research Institute (ILRI) is marking 40 years of livestock research in a two-day high-level event in Addis Ababa, Ethiopia, where ILRI has a principal campus.

In his keynote address to the ILRI@40 conference on the first morning, Kanayo Nwanze, president of the International Fund for Agricultural Development (IFAD), highlighted high-priority areas where livestock research can make the greatest contribution to poverty reduction and better food security in future.

One of these was finding innovative methods small-scale farmers and herders can use to better protect their environments and adapt to (and cope with) climate change. With the impacts of climate change on farming becoming ever more apparent, Nwanze said that agriculture, always a risky business, is becoming riskier today.

Nwanze argued that the key was to increase agricultural productivity while diversifying risks across different products. He provided some examples of successes in this area.

‘In Lesotho, farmers now have access to timely weather forecasts and as a result they are reducing their risk of losses because they have advance warning of the need to protect their livestock from extreme heat or extreme cold.’

Responding to the need to develop efficient livestock feeding systems that convert non-human consumable resources into valuable protein-rich food, he cited India, the world’s largest milk producer. Here the dairy industry relies almost entirely on fodder and roughage, such as wheat and rice straw and maize stover. The value of the milk India produces each year now exceeds that of India’s rice harvest.

Responding to concern about the impact of animal waste on the environment, in China IFAD has partnered with the government to transform animal waste into dollars. Biogas digesters are being used to turn the bio-methane into household fuel, making it less damaging to the atmosphere and far less damaging to human health.

Now, in Kenya and Rwanda, IFAD is scaling up a new generation of low-cost portable biogas systems. This is saving mostly women hours spent collecting firewood for cooking, reducing respiratory and eye diseases, and providing ‘bio-slurry’ for crop cultivation. And the power station is just one cow!

Nwanze said we will feed the world in coming years only by fully supporting and integrating livestock in the world’s mixed food production systems.

He called for increased investment in these mixed food production lands and systems, which are home to most of the world’s smallholder farmers. He challenged researchers ‘to come up with other technologies that can address environmental concerns while also improving the lives and livelihoods of each and every person involved in agriculture. And as you do this, pay particular attention to the needs of women.’

Written by Keith Sones a consultant writer with ILRI