A high-profile two-day conference held in Addis Ababa, Ethiopia, 6–7 Nov 2014, to mark the 40-year anniversary of the International Livestock Research Institute (ILRI) brought together world leaders at the intersection of livestock science and development.

This conference, the culmination of a series of events that ILRI organized in different parts of the world in the last quarter of 2014 to mark its 4-decade milestone, gave ILRI an opportunity to acknowledge the many people who have helped build the institute and make it what it is today. Chief among these are ILRI’s past and present directors general. These include the following.

Ross Gray (above, photo by Brian Perry), a British veterinary scientist (specializing in African animal trypanosomiasis) who led ILRI’s Nairobi-based predecessor, the International Laboratory for Research on Animal Diseases (ILRAD) for 12 years (1982–1994) and who is now retired and living (and, one assumes, working) on a farm in northern England with his wife, Maureen Gray.

Hank Fitzhugh (above, photo by ILRI/Susan MacMillan), an American animal scientist who headed ILRI’s Addis-based predecessor, the International Livestock Centre for Africa (ILCA), from 1993 through 1994 before becoming ILRI’s first director general (1995–2001) and who is now a senior fellow at the Borlaug Institute for International Agriculture living in Texas, USA, with his wife, Nancy Fitzhugh.

Carlos Seré (above, photo by ILRI/Apollo Habtamu), a Uruguyan livestock economist who succeeded Fitzhugh in 2002 and led the institute for 9 years and is now serving as senior advisor on strategic partnerships and global initiatives at Bioversity International, in Rome, Italy, where he lives with his wife, Chrysille Seré.

Jimmy Smith (above, photo by ILRI/Apollo Habtamu), a livestock scientist originally from Guyana (he has dual citizenship with Canada) who took over from Seré in Oct 2011 to become ILRI’s current director general and who is based at ILRI’s headquarters in Nairobi, Kenya, where he lives with his wife, Charmaine Smith. 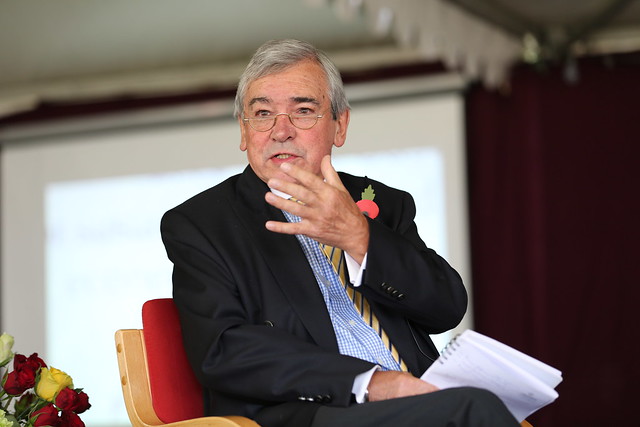 A highlight of the ILRI Addis conference was the assembly of three of these four distinguished livestock leaders (Ross Gray was unable to attend the event) on the second day for a ‘Hard Talk’ interview by Brian Perry, a former program leader at ILRAD and ILRI who is himself a respected authority on livestock epidemiology and a well-known analyst of livestock-for-development issues. As Perry is also known at ILRI for his feisty delivery of hard questions and quotable (often irreverent) quips, the audience of some 200 ILRI staff and guests that gathered under a big tent on ILRI’s leafy Addis campus the second day of the conference to hear the ‘hard talk’ held their breaths as it began, with Perry fairly jumping out of the starting gate with his first hard questions.

Forewarned is forearmed, however, and the line-up of directors general that have served ILRI so well over two decades easily held their own, displaying as much wit and grace as honest reflection during the 33-minute question-and-answer session.

All in all, it was a vivyfying (google says that is a word) as well as reifying (that is a word) session that managed to sweep away a few institutional cobwebs as well as entertain and inform, as you will see if you watch this video of the session. (We encourage you to watch the talk, as it opens with some spectacular socks* of Brian Perry, goes on to the elegant shoes of Jimmy Smith and ends with Perry thanking the [former] CGIAR ’emperors’ Jimmy Smith, Carlos Seré and Hank Fitzhugh.)

Below are some of the other grand men and women of livestock research for development who participated the ILRI40 Addis anniversary event.

These and other remarkable ‘livestock’ men and women, many of whom once studied or worked at ILRI, ILRAD or ILCA before going on to other institutions, left us with a strong institution, a solid reputation and an ambitious mission. The uncommon intelligence and commitment of these livestock leaders—as well as their their staying power and sheer grit—are our legacy. (Not to speak of a work ethic that is the envy of other institutions.) Every day, in every project and room and deliberation, we work in their shadows. And in their debt.

Good to have the chance to say all that! May they all live long and productive lives. And may they—and you—have a peaceful and joyous New Year.

Visit ilri.org/40 to find out about all the ILRI@40 events.
A playlist of all our videos of the ILRI@40 Addis event is on Youtube.

Here are blog posts about other the ILRI@40 events: