The following highlights of the 40-year anniversary event of the International Livestock Research Institute (ILRI) held at the institute’s headquarters in the Kabete suburb of Nairobi, Kenya, last week (1 Oct 2014) were compiled with the help of ILRI colleagues Ewen Le Borgne, Tezira Lore, Ephraim Mukisira and Shirley Tarawali; in addition to the formidable moderator of the day, former ILRI director of biotechnology Ed Rege; ILRI photographers of the day Paul Karaimu and Samuel Mungai; and of course the many tweeters of the day’s sessions, especially ILRI’s Diana Brandes (@DianaBrandes), Tezira Lore (@Tezira) and Jane Gitau (@shikos) in addition of course to ILRI (@ILRI), and with special thanks for tweeted pictures as well as remarks from Séona Jane Lee, a PhD student with a five-year project on ‘Investigating Networks of Zoonosis Innovation’ based at the University of Edinburgh (@INZI_Edinburgh) who joined us for the day.

The Nairobi 1 Oct 2014 event was the second in a series of events ILRI is holding with partners to mark its 40th anniversary and to help position it for the future. The first event was an ILRI-hosted side session at Tropentag 2014, an annual European conference on food security, natural resource management and rural development that was held in Prague in September this year. The next event in ILRI’s anniversary series will be on 13 Oct in Hanoi at a regional workshop for European-Southeast Asian experts on One Health in Action. Following that, ILRI will hold a special session on 15 Oct at a meeting of livestock science leaders and investors at the Borlaug Dialogue, which takes place 15–17 Oct in Des Moines, Iowa, during the World Food Week, and during which the World Food Prize is bestowed.

Follow the hashtag #ILRI40 to stay abreast of all ILRI’s anniversary events.

To open the morning’s proceedings, Professor Fred Segor, principal secretary in the Kenya Ministry of Agriculture, Livestock and Fisheries, gave the inaugural address on behalf of the Honourable Felix Koskei, cabinet secretary for the agriculture ministry, who was unable to join the morning session due to a conflicting engagement but came to ILRI’s reception later the same day. Excerpts of the address follow.

‘It is my pleasure to join you on this auspicious occasion to recognise the 40th anniversary of the existence of the International Livestock Research Institute, ILRI, and its two predecessors, ILCA and ILRAD. On behalf of the Government of Kenya, may I take this opportunity to warmly congratulate ILRI’s board, management and staff and to welcome you all to this important event.

‘As you well know, especially since the food price crisis of 2007/2008, there has been a renewed interest in the agricultural sector by many governments in sub-Saharan Africa, Kenya included. . . . More than ever before, there is a compelling need for African countries to continue the progress made towards the attainment of the Millennium Development Goals and to position themselves to address the emerging Sustainable Development Goals, including . . . sustainable agriculture. . . .

‘Worldwide, livestock contribute about 26% of the global protein and 13% of the total calories. Growth in demand for animal products is projected to increase significantly, particularly in countries that are currently classified as low and middle income or as emerging economies. For example, milk consumption in sub-Saharan Africa, particularly East Africa, is predicted to triple in the next few decades. Along with such impressive figures comes the opportunity for the livestock sector to contribute to development challenges.

‘Kenya exemplifies many such issues. Agriculture is the mainstay of Kenya’s economy. This fact has been emphasized in Kenya’s Vision 2030 Development blueprint; the Second Medium-Term Plan (2013–2017); and the Agricultural Sector Development Strategy (2010–2020). Besides pursuing these strategies, the government continues to advance the Comprehensive Africa Agriculture Development Programme (CAADP) agenda. A key role of my ministry is to ensure that these plans are fully implemented. This . . . can only be realized by working together with development partners, and . . .  research for development institutions, such as ILRI and the CGIAR Consortium, as well as by developing capacity through engagement with academia.

In terms of production value, 3 of the top 10 agricultural commodities in Kenya are livestock, with milk and beef being amongst the top three. The key livestock species in Kenya are dairy cattle, beef, sheep and goats, camels, poultry and pigs. . . . Livestock provide employment to about 10 million [Kenyans], and contributes as much as 40 per cent to the agricultural GDP, with well over half that contribution from the dairy sector. And 50 per cent of the agricultural labour force is employed in the livestock sector. . . .

‘As ILRI turns 40 it is befitting for me to highlight some historical aspects of the Government of Kenya relationship with the institute, starting with its predecessor the International Laboratory for Research on Animal Diseases, ILRAD. ILRAD was created in 1973, paving the way to the commencement of what has become a long and effective partnership between Kenya and the CGIAR. Indeed, currently Kenya hosts several of the 15 centres that are members of the CGIAR Consortium, and Nairobi is the only location worldwide where two such centres, ILRI and the World Agroforestry Centre, have their headquarters.

‘In 1994, there was another milestone, when the instrument creating ILRI as an international organization that brought together ILRAD and ILCA (the International Livestock Centre for Africa) was signed in Berne, Switzerland, on 21 September 1994 and the centre started operations 1 January 1995. Thus, this year marks 40 years (20+20) since the creation of ILRAD (1973) and ILCA (1974), its forerunners. Today’s event marks 40 years of collective livestock research and development work by ILRI and its two predecessors together with innumerable partners.

Kenya has and continues to benefit from the research being conducted by ILRI and other international research centres implementing activities in collaboration with the now Kenya Agricultural and Livestock Research Organization, KALRO, and its predecessors, local universities, other public agencies, the private sector, and not least, farmers themselves. Through such partnerships, ILRI has provided critical evidence to inform policymaking and contributed to the development of new tools and products that are making significant contributions to improving livestock production and productivity. . . .

‘The following are a few concrete examples to illustrate what we as a nation consider to be some of the most important contributions of ILRI over these years.

‘. . . On behalf of the Government of Kenya, I convey our gratitude to the International Livestock Research Institute and to its development partners and investors, including private and public agencies and farmers themselves, who are an integral part of the success of these programs.

‘I wish you all a very successful event here in Kenya to recognize ILRI@40. Kenya and my ministry in particular are delighted to have been part of the past 40 years, and look forward to even stronger and more fruitful engagement in the coming decades.’

Some of the challenges Traore raised in his presentation were:

The following are some soundbites from the panelists. 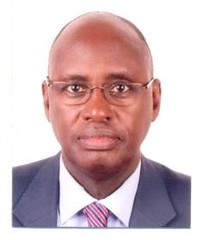 Summing up by moderator Ed Rege

An animal geneticst by training and experience and now chief executive officer of the Institute for People, Innovation and Change in Organisations (PICO)–Eastern Africa

One of the news clippings the day generated
‘On Wednesday (October 1), the International Livestock Research Institute (ILRI) in Nairobi celebrated its 40th anniversary. The celebration at the Institute’s Headquarters was attended by representatives of the Government of Kenya, founding member countries and various institutions, as well as livestock scientists.

‘Ambassador Shemsudin Ahmed Roble, Ambassador of Ethiopia to Kenya and Permanent Representative to the UNEP and UN Habitat congratulated the management and staff of ILRI for their enduring efforts to support the development of the agricultural sector in Africa.

‘He noted that Ethiopia, one of the founding members of the Institute, has worked very closely with it and had benefited greatly from its research and from the development activities aimed at improving the livelihood of small holder farmers.

‘The Ambassador said ILRI activities in Ethiopia complemented the efforts of the Government to transform the agricultural sector. ILRI had been working with various government institutions at regional and federal levels to support the development of the livestock sub-sector and with the Ethiopian Agricultural Transformation Agency, a specialized agency established by the Government as a focal institution for research and development to realize the development objectives of the Growth and Transformation Plan.

‘Ambassador Shemsudin stressed that the objectives of ILRI research and development fitted closely with the development agenda of the Government, to ensure food security through intervention that could increase productivity of the crop-livestock sector. He also expressed the Government’s commitment to continue working closely with ILRI in transforming the agricultural sector to improve the livelihood of small holder farmers.’

You can watch and listen to the ILRI40 plenary presentations and discussions here: http://ilri.org/livestream

Follow the hashtag #ILRI40 to stay abreast of all of ILRI’s anniversary events.

View all pictures of the Nairobi 1 Oct event in this ILRI Flickr album.

Stay up to date on all the anniversary events on this ILRI40 event page.

Join our LinkedIn Group, International Livestock Research, for news and conversations and more!