Livestock production accounts for approximately one third of the global water footprint, and Ethiopia is no different. A scarce commodity in the country, water availability has been aggravated by climatic fluctuations and rapid economic growth. With the potential consequences for human health of a lack of quality drinking water, as well as for the country’s development, there is a strong case for enhancing the role of research for development in understanding better how limited water resources can be used.

Water and Livestock Development in Ethiopia, the theme of this year’s Annual Conference of the Ethiopian Society of Animal Production (ESAP) from 27 to 29 August, was addressed by speakers from a range of related issues, including rangeland dynamics and human health, sustainable pastoralism, genetics, livestock value chains, and the contribution of the livestock master plan to the national Growth and Transformation Plan (GTP) II. 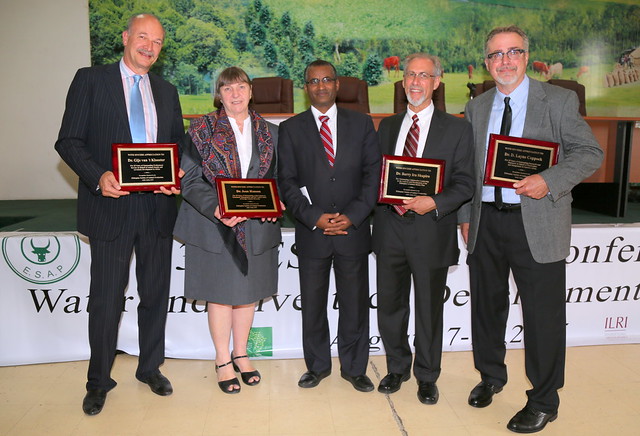 Prior to the official commencement of the event, ESAP officially recognized the contribution of five non-Ethiopian scientists—two present day and two former staff member of the International Livestock Research Institute (ILRI)—to the development of the country’s livestock sector. They were presented with an ESAP Career Award by the Ethiopian State Minister for Livestock, H.E. Gebregziabher G/Yohannes.

The Ethiopia livestock master plan (LMP) will be officially launched by the Government of Ethiopia in September 2015, but the full report and a series of research briefs on the LMP, livestock feeds, genetics, animal health and an enabling policy and institutional environment can be found in ILRI’s open access repository.

Barry Shapiro, a program development specialist at ILRI, was recognized for his ‘Outstanding collaborative leadership in the analysis and development of the Ethiopian livestock master plan‘, while Jean Hanson, who leads ILRI’s forage diversity project, was acknowledged for ’35 years of outstanding achievements in genebank management and the conservation of forage genetic diversity’. Other awardees included former ILRI staff members Layne Coppock of Utah State University, Hank Fitzhugh of the Norman Borlaug Institute for International Agriculture, and Gijs van ‘t Klooster, formerly with the Food and Agriculture Organization of the United Nations.

Agricultural development is a national priority, and within that the livestock sector is crucial, the Ethiopian State Minister for Livestock explained to crowded room of academics and practitioners. Of the rapid growth experienced in recent years in the country, more than 40% has been accounted for by growth in the agricultural sector. Key to further development will be creating an enabling environment to meet the challenges of feeds shortages and the pressures on limited water resources. Trade-offs between higher production and stressed water resources need to be addressed intentionally; this is where research and knowledge sharing come in.

In his address to the conference, Shapiro outlined how investment interventions—better genetics, feed and health services, which, together with complementary policy support—could help meet the GTP II targets by improving productivity and total production in the key livestock value chains for poultry, red meat-milk, and crossbred dairy cows. If the proposed investments—of 7762 million Ethiopian birr (USD 388.1 million), 57% and 43% from the public and private sectors respectively—were successfully implemented, they could massively reduce poverty in livestock-keeping households, helping family farms move from traditional to improved market-oriented systems.

Other ILRI staff members speaking at the event include Tadelle Dessie of the African Chicken Genetic Gains (ACGG) project and Berhanu Gebremedhin of the Livestock and Irrigation Value Chains for Ethiopian Smallholder (LIVES) project.