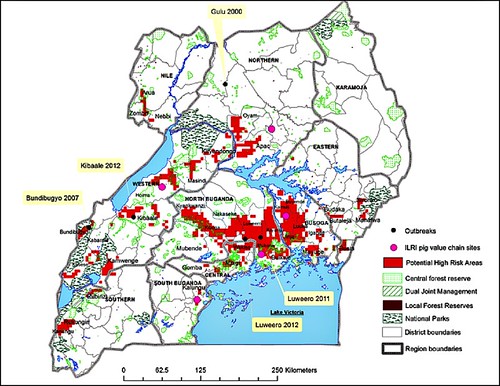 The map above shows high-risk areas due to a spatial overlap of three proposed risk factors for zoonotic Ebola virus transmission in Uganda: modelled zoonotic niche, domestic pig distribution and high numbers of people living in extreme poverty; the map is taken from a paper published in Transboundary and Emerging Diseases, Assessing the potential role of pigs in the epidemiology of Ebola virus in Uganda, by C Atherstone, E Smith, P Ochungo, K Roesel, D Grace, 27 August 2015 (figure credit: ILRI).

This article is written by two of this paper’s authors: Christine Atherstone, an ILRI researcher based in Uganda who leads this work and is lead author, and Delia Grace, who leads ILRI’s Food Safety and Zoonoses research program.

A new risk assessment paper, Assessing the potential role of pigs in the epidemiology of the Ebola virus in Uganda, was published in the science journal Transboundary and Emerging Diseases on 27 Aug 2015. The authors are scientists at the International Livestock Research Institute (ILRI).

Presently, there is no solid evidence that pigs have any role in the past outbreaks of Ebola virus disease.

In recent years the world has seen major problems caused by bird flu, MERS and other new ‘zoonotic’ diseases, which appear first in animals and then spread to people.

Zoonotic diseases cause most damage when they take animal and human health workers by surprise, giving public health and animal disease control workers no advance warning or time get disease prevention practices in place before the infections start to spread widely.

In addition to Ebola, some of the animal-to-human diseases the scientists are investigating in pigs are brucellosis, trichinellosis (measles), cysticercosis (pig tapeworm) and human sleeping sickness.

Undertaking this kind of research helps to detect and stop the spread of emerging zoonotic animal diseases before they can jump to humans.

Why study pigs to find disease?
Due to rising demand for pork in Uganda, a massive expansion of pig production is taking place throughout the country. Pigs are preferred to other livestock species due to their relatively rapid growth rate, large litter sizes and potential to provide financial returns in a relatively short time.

Uganda’s expanding pig populations, particularly those reared under free-range systems, overlap with habitats shared with fruit bats. Pigs scavenging for food can thus come in contact with the dropped fruit, excrement, saliva, urine and faeces of fruit bats, which are suitable hosts for the Ebola virus.

Pigs are often a source for human disease, and the pig industry is growing rapidly in Uganda, where the pig sector is of big and growing importance to the livelihoods and diets of many poor households.

Over the past three decades, the reported pig population has increased 1500%, from 0.19 to 3.2 million in Uganda. In 2011, Uganda had the highest per capita consumption of pork in East Africa at 3.4 kg/person/year. More than 1.1 million poor households in Uganda own pigs, mostly managed by women and children in backyard activities. Indeed, 80% of pig production in Uganda is carried out by smallholder crop-livestock farmers. Despite this dependence on livestock, there is a strong association between poverty, hunger, livestock keeping and zoonoses.

Greater understanding of if and how the Ebola virus is or could be infecting any of the country’s pig populations will help Uganda expend its limited veterinary and medical health resources most efficiently to ensure the health and the livelihoods of its people through improved food safety and security.

Conclusions
This risk assessment paper indicates that further research on the role pigs may play in Ebola virus transmission in Uganda is warranted due to the following facts and factors.

Although there is no solid evidence that pigs have any role in past outbreaks of Ebola in Uganda, ILRI and its Ugandan partners are conducting further studies to elucidate the roles pigs may play in many new diseases. These researchers have identified some best practices, especially reducing pig movements and improving hygiene at slaughter, that can greatly reduce the spread of any disease associated with pigs.

This research is conducted within ILRI’s Food Safety and Zoonoses program and within the Prevention and Control of Agriculture-Associated Diseases flagship of the CGIAR Research Program on Agriculture for Nutrition and Health.