Lora Iannotti, associate dean for public health at the Brown School at Washington University, in St Louis, Missouri, at the Global Forum for Food and Agriculture (photo credit: ILRI/Susan MacMillan).

On 19 Jan 2018, one of ten expert panel discussions at the Global Forum for Food and Agriculture (GFFA) was held on Sustainable solutions to the livestock sector: The time is ripe! This two-hour session was organized jointly by the German Federal Ministry for Economic Cooperation and Development (BMZ), the German Corporation for International Cooperation (GIZ), the International Livestock Research Institute (ILRI), the Global Agenda for Sustainable Livestock (GASL) and the Livestock Global Alliance (LGA).

This session was moderated by ILRI Assistant Director General Shirley Tarawali. Following a welcome by ILRI Director General Jimmy Smith, Stefan Schmitz, head of BMZ’s division of rural development and food security and commissioner for BMZ’s special initiative on One World–No Hunger, gave an opening speech. Fritz Schneider, chair of the Global Agenda for Sustainable Livestock (GASL), then gave a short overview of livestock and the UN’s Sustainable Development Goals, followed by a presentation by Kenyan Robin Mbae on livestock and climate change.

The next aspect looked at in more detail in this expert panel session was the role of animal-source foods in human nutrition. ILRI’s Shirley Tarawali introduced the participants to the speaker on this topic, Lora Iannotti, who is associate dean for public health and associate professor at the Brown School at Washington University, in St Louis, Missouri. Iannotti has considerable expertise in maternal and young child nutrition and nutrient deficiencies.

‘(1) Globally, 156 million young children have stunted growth and development. Animal-source foods (ASFs) can play a crucial role in meeting the World Health Assembly nutrition target to reduce stunting by 40% by 2025.

‘(2) Biological and evolutionary rationale underpin the need for animal-source foods in human nutrition. Animal-source foods provide not only protein but also limiting nutrients, the lack of which is related to poverty and infectious disease. These are vitamins A, B12, choline, iron and zinc, which occur in highly bioavailable matrices that enable people to absorb and metabolize them more efficiently

‘(3) Eggs and animal milk, among nature’s first foods, provide a sustainable solution for confronting critical nutrient deficiencies. Strong evidence is emerging for egg nutrition in reducing stunting and as biomarkers of brain development. 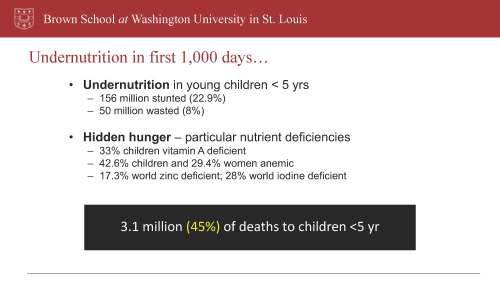 ‘Undernutrition in the first 1,000 days of life, from pre-conception to two years of age, is highly prevalent. One in five children globally are affected by this chronic form of malnutrition.

‘But even more prevalent is the problem of ‘hidden hunger’. One in three children have vitamin A deficiency, 17% of all the world’s population is thought to be zinc deficient, and 28% deficient in iodine—interestingly, these are all of the nutrients found in animal-source foods as bioavailable.

‘Cumulatively, these undernutrition problems contribute to
3.1 million child deaths, or 45% of all childhood deaths under five years of age. 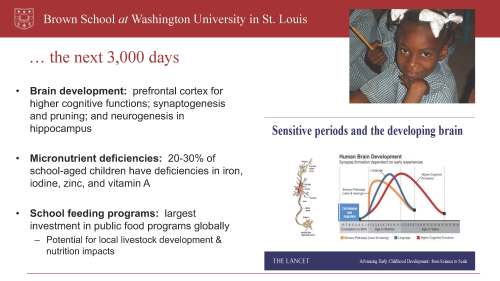 ‘Now thew world is focused on the first 1,000 days of life but I have an agenda to pay attention to the next 3,000 days because there is on-going brain development. You can’t measure this as easily, but it is occurring.

‘The problem of micronutrient deficiencies affects school-aged children, with 20–30% of them deficient in iron, iodine, zinc and vitamin A.

‘Importantly, school feeding programs represent one of the largest public food investments. So we’re spending a lot of money but we don’t know if it’s affecting nutrition, and in particular, brain development.

‘So there’s a strong biological rationale for animal-source foods. Again, because of the mechanism of delivery. It is actually physiologically impossible for young children to get the nutrients they need without animal-source food.

‘For example, vitamin A comes packaged as retinol in an animal-source food. That is it is absorbed at 12–24 times the rate that a plant-based choratinoid beta-carotene, for example, is absorbed.

‘Iron and zinc are other examples. Iron comes delivered as heme iron in animal-source foods, which we absorb at two times the rate as plant-based non-heme iron. Choline, only an essential nutrient since 1998 so we don’t know as much about it but we do know that it comes concentrated in animal-source foods.

‘Vitamin B12 is produced by anaerobic bacteria. You can only find it in animal-source foods, so vegetarians and vegans are at risk of vitamin B12 deficiency if they don’t take supplements.

‘There’s also evolutionary rationale: For two million years we subsisted on a hominid diet that looks different from what we consume now. It’s only since the agricultural revolution ten thousand years ago, and a mere 200 years ago since the industrial revolution, that we’ve been consuming a very different diet. So 2.6 million years ago Homo Erectus differed from other hominids in that they had larger brains and larger bodies and this has been attributed to animal-source foods.

‘We recently published a paper on the ‘genome nutrition divergence’. This builds on that theory that the human genome evolved to adapt to conditions that no longer exist.

‘Seeds, eggs and milk are Nature’s first nutrients. They’re designed to sustain and support the life of an organism’s offspring entirely. They provide a complete set of nutrients and other bioactive factors. And they’re more economically affordable and renewable compared to other foods. 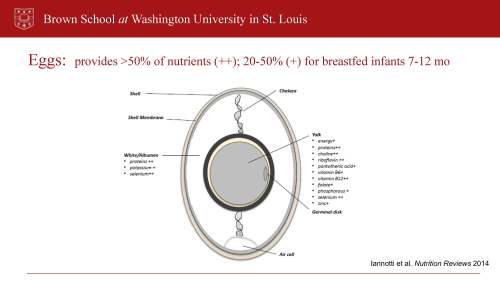 ‘Eggs in particular provide more than 50% of some nutrients and 20–50% of other nutrients for a breast-fed child 7 to 12 months.

‘Now I’m briefly going to present important findings from the Lulun project in Ecuador. Interestingly, very few people have studied the effects of animal-source foods on young child nutrition. This was a randomised controlled trial.

‘We conducted the study in Cotopaxi, a mixed indigenous community with high baseline stunting. The intervention was simple. One egg per day for six months. We followed the children longitudinally, we conducted an important social marketing campaign that fostered ownership, participation and compliance. We used mixed methods, quantitative and qualitative, and we collected blood to look at biomarkers of the effects of the eggs. 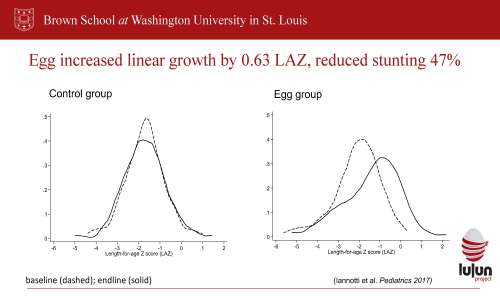 ‘We found that eggs increased linear growth by 0.63 length-for-age z score. To put that into context, the average effect for children of this age globally is 0.37 for other kinds of foods. This animal-source food had this large effect.

‘You can see on the right, the egg group, the dateline is baseline and the solid line is endline. And what you see is the entire distribution shifting. So all of the children were growing to their growth potential as compared to the control group.

‘The other important finding that has just been published was an increase in the biomarkers that are related to brain development. So choline concentration increased by 0.35. Choline is needed for cell membrane, neurotransmission, memory and learning and gene expression.

‘We also surprisingly increased by 0.43 docosahexaenoic acid (DHA), which is the long-chain fatty acid found primarily in the brain. It is important for neurogenesis, neurotransmission, myelination and synaptic plasticity, which are all important for brain development. Other markers were also increased. 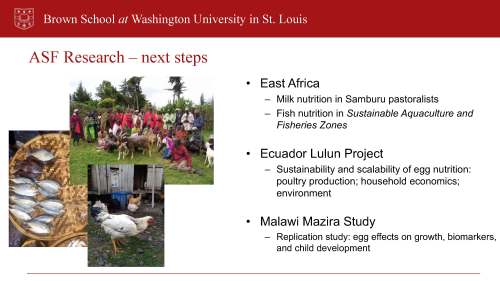 ‘The next step for this research is to look at milk nutrition among Samburu pastoralists. We’ve been doing ongoingly that in Kenya. Fish nutrition in Sustainable Aquaculture and Fisheries Zones. In Ecuador we’re now moving into sustainable and scalable egg nutrition, so poultry production, household economics and the environment. And in Malawi we’re trying to replicate the egg study in a different context and a different background cereal consumption.

‘To conclude, animal-source foods in my view can contribute significantly to these World Health Assembly targets of reducing stunting, anaemia and low birthweight.

‘Animal-source foods can play an important role—there’s biological and evolutionary rationale. They provide these limiting nutrients, not just protein—but vitamin A, B12, choline, iron and zinc. Egg nutrition in particular is showing this amazing effect on reducing stunting and biomarkers of brain development.’

Read the science journal articles on this subject:

Check back here for highlights of the next two short presentations at this expert panel session of the GFFA.

Watch a 3-minute animated video produced by Germany’s Federal Ministry of Food and Agriculture to kick off the GFFA.

Read news clippings about the GFFA

Towards a sustainable, responsible and efficient livestock sector—Jimmy Smith at the Berlin Global Forum for Food and Agriculture
ILRI News blog, 22 Feb 2018
A delegation from ILRI was involved in several of this year’s GFFA events, including the following the ‘Kick-off’ event on 18 Jan 2018, with ILRI Director General Jimmy Smith serving on the panel. Smith made the following main points in the panel discussion. ‘Although the solutions and trajectories for shifting to a more sustainable, responsible and efficient livestock future look very different, and will have very different starting points, depending on the local economy and environment, the kind of livestock raised and the system used to produce the animals, the overall aims of livestock stakeholders worldwide are similar if not the same—to produce food-producing animals in win-win-win ways that are sustainable, responsible and efficient.

Livestock are taking the limelight in global policymaking fora
ILRI News blog, 21 Feb 2018
Recognition of the importance of livestock in addressing some of the world’s greatest challenges, including meeting the United Nations’ 17 Sustainable Development Goals, has been rising sharply in recent years among leading national, political, donor and international bodies. ILRI works with many of these organizations to help ensure that the world’s many diverse livestock systems evolve in ways that are efficient, profitable, sustainable and equitable.

Animal protein virtually irreplaceable part of ‘children, young & elderly diet’: DG, FAO
Business World (India) 25 Jan 2018
The world population is expected to reach 9.7 billion by 2050 and 11.2 billion by 2100, according to a report. As a result of this growing population, consumer behaviour will also change. Now, more and more people live in cities, which unfolds more challenges in farming for middle-class people.

GFFA discusses the future of animal husbandry
The Pig Site, 24 Jan 2018
A delegation from the Ministry of Agribusiness, led by Luis Miguel Etchevehere, actively participated in the Global Forum for Food and Agriculture (GFFA). On this occasion, the German Presidency proposed as a topic of discussion, “Shaping the future of livestock in a responsible and efficient sustainable way”.

Food is Political! 33,000 tell the world they are fed up with agri-industry
ARC2020 (Europe), 20 Jan 2018
33,000 citizens—including 160 tractor driving farmers—made their way through the winter streets of Berlin on Saturday to tell the world—food is political!

Thinking ‘beyond the farm’—On Germany’s longstanding commitment to agricultural research for development
ILRI Clippings blog, 30 Nov 2017.
Stefan Schmitz delivers a short (6-minute) filmed presentation at one of several linked collaborative events, titled ‘Agriculture Advantage: The Case for Climate Action in Agriculture’, led by the CGIAR Research Program on Climate Change, Agriculture and Food Security (CCAFS) and held on the sidelines of the 23rd Session of the Conference of the Parties (COP23) to the United Nations Framework Convention on Climate Change (UNFCCC) on 7 Nov 2017 in Bonn, Germany.