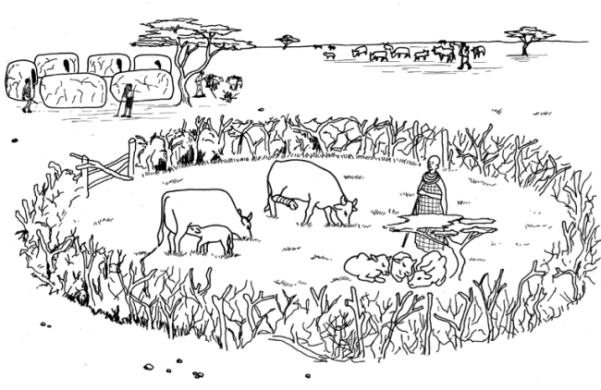 Agricultural researchers working to enhance traditional pasture conservation by Tanzania’s pastoral Maasai communities are systematically addressing gendered norms and roles to ensure that they don’t end up hurting more than helping these communities.

Across the rangelands of Tanzania, pastoral communities rely on their livestock for food security. During the annual dry season in particular, animals produce the milk that feeds the family when little other food is available. Yet feeding animal herds in this season is hard work. During these four to five months, the men move away, taking most of the household animals with them in search of fresh pasture, leaving behind only a few animals that the women will rely on to feed themselves and their children until the men (and the rains) return, months later. The animals that are left behind in the homestead are typically stock unlikely to survive the journey to and from the grazing grounds because they are pregnant, lactating, sick or injured.

Maasai have relied on a traditional Maasai pasture conservation system to feed their animals. In this system, known as ololili in Maasai, a single household, or sometimes several households working together, will fence a bit of land with thorny branches and bushes. Inside these enclosures, the natural pasture, composed of wild plants, is left to grow undisturbed during the wet season. Then, during the long dry season, when pasture grasses are spent, the women let the vulnerable stock left in the homestead by the men into the ololili to graze on the reserved green fodder for several hours a day. A typical single-family ololili of about 0.8 hectares (nearly 2 acres) is sufficient to support 5–6 cows and 2 calves throughout the dry season. With the men away, it is the women who control access by the animals to the ololili enclosures, ensuring that the animals are sufficiently fed but do not overgraze the area.

Forage scientists working with Maasai communities in eastern Tanzania consider this traditional pasture conservation system to have great potential to support food security during the dry season. By increasing the number of plants growing in the ololili scientists would support an increase in the amount of forage available to pastoral animals. Such forage intensification would enhance food security here by making more milk available to households during these yearly ‘lean seasons’. The benefits of such an intervention could be particularly big here, they reasoned, where severe dry-season forage shortages drastically reduce milk supplies every year, with animals and people alike commonly losing weight, children commonly pulled out of school for lack of fees, and cattle, goats, sheep and even camels commonly dying of hunger.

To intensify the ololili forage system, the researchers aimed to introduce plant varieties suited not only to the local rangeland conditions but also to the local social, economic and cultural systems. The researchers, Alessandra Galiè and Ben Lukuyu, who come from the International Livestock Research Institute (ILRI), and Walter Mangesho and Jonas Kizima, from the Tanzania Livestock Research Institute (TALIRI), quickly began to see that to be successful, they would have to pay close attention to the different roles that women and men play in managing the ololili system.

In 2015, we began to work with a group of ILRI scientists to investigate gender issues around ololili and general livestock management in Maasai households in Tanzania’s Morogoro region. We looked specifically at the types of forage grasses, shrubs and trees preferred by members of the community and at the opportunities and the constraints faced by women and men in managing the ololili dry-season forage reserves. The findings from this gender study informed our selection of plant species and varieties to introduce to intensify forage growth. Importantly, the findings informed institutional as well as technical interventions, with the former focused explicitly on determining ways to best ensure that both women and men actively participated in, and benefited from, this forage conservation project.

The ololili-related roles in these Maasai households are gendered. Men do most of the livestock breeding work, as well as sourcing animal and human medicines and moving their herds to dry-season grazing grounds for several months each year. Men also are responsible for claiming the pieces of land within the community that they will fence off for their family’s ololili reserves and for building and maintaining the rough thorn fences. Women are in charge of feeding animals that stay in the homestead, managing the ololili and its use while the men are away, milking the animals and selling any milk, identifying animal diseases and looking after sick animals, and feeding their families.

These discrete roles of men and women were found to affect their preferences for traits of the wild forage plants in their ololili. Women, for example, prioritized plants that increased milk productivity because they controlled all aspects of milk production, sales and consumption. Men, on the other hand, ranked high those plants that are good for human medicinal uses because of men’s role in procuring medicines for household members. Understanding these gendered trait preferences turned out to be critical for choosing what plant species and varieties to introduce to intensify ololili forage production. In the end, the TALIRI and ILRI scientists were able to identify two plant species that possessed two traits that men and women both preferred: an ability to tolerate drought and to increase the milk productivity of the animals.

The gender study also revealed customary norms affecting the ways women performed their household roles. For example, because men are considered the sole decision-makers in household matters, women had little say as to how to manage the ololili or which animals should be left behind at the homestead during the dry season. Women reported that this lack of decision-making hurt their ability to feed their families, as they are the ones tasked with feeding their families in the annual ‘hunger months’ and must do so with no support from the men who are away and with the little milk produced by the needy and unproductive animals the men choose to leave behind.

This community’s customs also discourage women from speaking in public and from interacting with men who are unrelated to them. These norms prevented women, widows and single women in particular, from claiming land to build an ololili and therefore from establishing a forage reserve. The norms also discouraged women from facing up to men who let their animals invade the women’s ololili to consume their precious conserved grasses. Once depleted of forage, of course, an ololili is of no further use for another whole year, until after the forage plants have grown again in the next rainy season.

We considered addressing these and other constraints faced by these women essential to the success and sustainability of our technical forage interventions.

We saw, for example, that if the project managed to increase and improve the biomass grown in a given ololili but paid little to no attention to gender issues, such forage intensification might serve only to make that ololili even more attractive to male invaders, leading to greater, not lesser, food insecurity in the households adopting the forage intervention.

Our project would thus inadvertently end up hurting the food security of the very households we were aiming to help.

Based on these findings and understandings, we began initiating ways to help increase the profile of the women and their decision-making regarding the ololili system while at the same time ensuring that men were actively involved and benefited as much as women from the project. To address gendered norms likely to reduce the usefulness of intensifying the ololili system for better food security, we involved from the very start of the project women and men equally in selecting and planting improved pasture plants. We also conducted a ‘forage champion’ initiative to give higher visibility to the roles women play as ololili and livestock managers with the aim of supporting an increase in women’s decision-making.

We noticed that simply having conversations on gender roles in the household helped household members to acknowledge their complementary contributions to household food security and also helped women to find their voices regarding ways they could further improve their contributions. Today, we are continuing to develop and implement strategies aiming to gradually create a social environment more conducive to inclusive and sustainable management of ololili for the betterment of whole households. We are also attending now to finer-resolution social characteristics, such as the marital status, age and wealth of the women, that are likely to affect the gender dynamics—and thus the success or failure—of our forage improvement interventions. The constraints faced by widows and single women, for example, may need to be specifically addressed to ensure the success of the intervention.

An important learning for us was that agricultural researchers need to take explicit, systematic and expert approaches to address gender issues as well as, say, to agroecological, technological and policy issues. If no gender approaches are included, or if those included are not explicit, systematic and expert, we found that we were likely to miss gender-specific factors critical to the success of our technological intervention.

The sticky part is that it takes a lot of conscious effort and committed time to modify traditional gender norms.

Like many other development experts, we agricultural scientists can easily find ourselves unthinkingly accepting gendered roles, and so end up reinforcing the very behaviours that can sabotage the success of our interventions.

In our particular case, a failure of ours at times to maintain explicit considerations of gender issues in all stages of our forage work had us easily slipping back into taking ‘gender-blind’ approaches that might, if continued, have propped up existing gender norms and so derailed our project.

For more information, contact Alessandra Galiè at a.galie [at] cgiar.org.

See also Getting by in the dry season: Ololilis in Tanzania, by Alessandra Galiè and Ben Lukuyu, chapter 14 in Rhiannon Pyburn and Anouka van Eerdewijk (eds), A Different Kettle of Fish? Gender Integration in Livestock and Fish Research, LM Publishers, Volendam, 2016.

Acknowledgments
The initial technical research on establishment of improved forages in the ololili system in Tanzania was undertaken as part of a MilkIT project (Enhancing dairy-based livelihoods in India and Tanzania through feed innovation and value chain development approaches), which ran in Tanzania and India from 2011 to 2014 and was funded by the International Fund for Agricultural Development (IFAD). The project was led by ILRI. The International Center for Tropical Agriculture (CIAT) was responsible for activities in Tanzania.