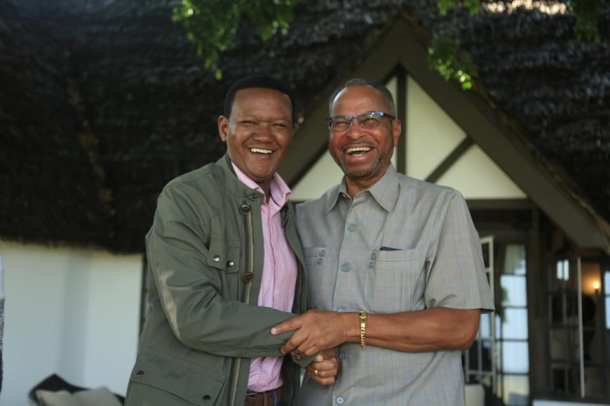 The governor of Machakos County, Dr. Alfred Mutua, visited the International Livestock Research Institute’s (ILRI) Kapiti Research Station on Thursday, 27 February. ‘It was an eye-opening trip and I look forward to visiting them again,’ he said.

Governor Mutua visited Kapiti at the invitation of ILRI Director General Jimmy Smith. ‘We wanted the governor to see first-hand the work that we’re doing on animal health and productivity, animal breeding, feed and forage, vaccination, dairy production, and environmental issues such as wildlife ecosystem management, global warming and greenhouse gas emissions’, said Smith. ‘We wanted him to understand how it helps the people of Kenya and specifically Machakos county’.

Located about sixty kilometres southeast of Nairobi, on 13,000 hectares of semi-arid rangeland in Machakos County, Kapiti Research Station provides scientists from around the world with an important environment to conduct research on issues ranging from animal health, genetics/breeding, and productivity to forage production, climate change and wildlife management.

Kapiti is also deeply rooted in the local community and provides a variety of services from demonstration programs to education projects for students at every level, from primary school to post-graduate and has plans to further expand these services.

Like many property holders in Kenya, Kapiti has been attacked in recent years by fraudsters and landgrabbers trying to establish false claims to the land. They’ve trespassed on the property, tried to build illegal structures on it and attempted to sell falsified title deeds to unsuspecting members of the public. At one point, they physically threatened the 100 or so Kenyans, nearly all from Machakos county, who work and live with their families at Kapiti.

In a Facebook posting and a series of tweets, Mutua lauded the work ILRI is doing to promote food security and livelihoods in the county, Kenya and the developing world, and said his government is committed to working with ILRI to combat the landgrabbers. ‘I assured [ILRI leadership] that my Government will protect this important institution and ensure greedy, misinformed people and criminals do not affect their international work’, he said.

Smith began the day by providing Governor Mutua with an overview of ILRI’s work on livestock and its importance in the developing world. ‘Livestock contribute directly to eight of the 17 Sustainable Development Goals (SDGs) and indirectly to most of the others’ he pointed out. ‘We acquired Kapiti in the late 1980s to provide our scientists with a disease-free environment to conduct research on East Coast fever and African animal trypanosomiasis.’

Since then, Kapiti researchers have focused on other livestock diseases, including Rift Valley fever and malignant catarrhal fever. It has helped conserve a local breed of sheep known as the Red Maasai, which had been on the decline after the introduction of a larger South African breed. And it has partnered with the UK Space Agency and others to conduct global warming land surface temperature measurements using eddy covariance towers—in effect, sophisticated weather stations that also measure greenhouse gas emissions.

Mutua touched on many of these points in his postings on the visit. ‘The research they undertake is vital in improving animal stock and testing vaccines essential for the protection of both human and animal lives’, he wrote on his https://www.facebook.com/plugins/post.php?href=https%3A%2F%2Fwww.facebook.com%2FDrAlfredMutua2022%2Fposts%2F1486695364813400&width=500” target=”_blank” rel=”noopener”>Facebook page.
And to his more than 830,000 followers on Twitter, he reiterated his support for Kapiti against land grabbers: ‘I was impressed by the organization and land use of the Kapiti research area and it was clear that for them to succeed, they need to protect their land from encroachment. It is vital to keep human habitation away from the ranch for effective quarantine of animals under research’.

Smith said he was delighted with the visit and looks forward to working with the governor on developing new and innovative ways for Kapiti to help the local communities as well as continue its work to support/impact Africa and globally. There are potential projects in feed and forage, livestock value chains, vaccination programs and new educational initiatives in the works.

‘I think the partnership between ILRI, the local community and the county government will continue to grow and become more effective’, said Smith.