This Jun 2015, Evidence on Demand, an international development information hub supported by the UK Department for International Development (DFID), published a 44-page paper identifying key evidence gaps in our knowledge of livestock- and fisheries-linked antimicrobial resistance in the developing world and documenting on-going and planned research on this topic by key stakeholders.

The paper, written by veterinary epidemiologist and food safety expert Delia Grace, of the International Livestock Research Institute (ILRI), is titled: Review of evidence on antimicrobial resistance and animal agriculture in developing countries.

As the rise of antimicrobial resistance puts all of us at increasing risk of no-longer-treatable diseases, it’s in the interest of all of us to inform ourselves about what are, and are not, the causes of what threatens to be a ‘post-antibiotic era’, so we can take rational actions to prevent it.

Part of an infographic on record-high antibiotic sales for meat and poultry production in the United States in 2011 (via the Pew Charitable Trusts).

At the start, Grace gets some definitions out of the way. ‘Technically, an antibiotic is a substance produced by a microorganism that at a low concentration inhibits or kills other microorganisms and an antimicrobial is any substance of natural, semisynthetic or synthetic origin that kills or inhibits the growth of microorganisms (bacteria, virus or other) but causes little or no damage to the host.

‘This short paper aims to identify key evidence gaps in our knowledge of livestock- and fisheries-linked antimicrobial resistance in the developing world, and to document on-going or planned research initiatives on this topic by key stakeholders.

‘The antimicrobial resistant (AMR) infections in animals that are of most potential risk to human health are likely to be zoonotic pathogens transmitted through food, especially Salmonella and Campylobacter. In addition, livestock associated methicillin resistant Staphylococcus aureus (LA MRSA) and extended spectrum beta lactamase E. coli (ESBL E. coli) are emerging problems throughout the world.

In developing countries, AMR pathogens are commonly found in animals, animal food products and agro-food environments, but the lack of surveillance systems means there are no reliable national data on the level of AMR in animals and their products.

‘While AMR pathogens in animals and their products undoubtedly contribute to AMR infections in people, the literature from developing countries is insufficient to draw firm conclusions on the extent of this contribution.

‘The key driver of agriculture-related AMR is the quantity and quality of use of antimicrobials in livestock production and aquaculture. We don’t have accurate information on antibiotic use in developing countries but

‘The underlying driver for antimicrobial use and development of AMR is the livestock and aquaculture revolutions, by which is meant the rapid growth in intensive production systems in response to increased demand for livestock and fish products. This demand in turn is driven by population increases, urbanisation, improving economic conditions and globalisation in developing countries and is predicted to continue to increase.

Based on livestock intensification patterns, China, Brazil and India are current hotspots, and future hotspots are Myanmar, Indonesia, Nigeria, Peru and Vietnam.

Based on aquaculture trends,China is a hotspot and Indonesia, Thailand, Vietnam, Bangladesh, India and Chile are other countries where antimicrobial use in fish production may be problematic.

‘Many interventions using educational, managerial, regulatory and economic approaches to improve drug use have been studied. Training by itself is relatively ineffective but if combined with strategies to change market conditions (by changing incentives and accountability environment) better success has been achieved.

There are many animal husbandry options that can allow production without non-therapeutic antimicrobials, but these options have not been widely used in, or adapted to, developing countries.

‘In developing countries, there is a dearth of evidence on most aspects of agricultural related AMR. . . . At the same time, AMR is intrinsically a global problem that can only be managed at supra-national scale and the current strong momentum to take action on AMR provides an opportunity to address the problem globally and comprehensively, addressing both medical and veterinary use. This should be done in an evidence-based way which includes filling knowledge gaps, careful piloting of interventions, and rigorous evaluation of successes and failures.

‘Human infections caused by pathogens that have become resistant to the medical drugs impose a large burden of illness and death and entail enormous costs.

‘While many disease-causing organisms show resistance to drugs this report focuses on infections caused by bacteria that are potentially linked to agricultural use of antibiotics in developing countries.

‘Bacterial infections in people and animals have been successfully treated with antimicrobials since the discovery of these drugs in the first half of the 20th century. However, the use of antimicrobials in animal agriculture (both livestock and fish production) has been debated for decades because of its potential impacts on human health.

In recent years there is increasing consensus that there are links between veterinary drug use and drug resistance in human pathogens, and that it is desirable to reduce antimicrobial use in agriculture.

‘Agriculture is of crucial importance for food security and development.

Worldwide, one in three people work in agriculture and farming produces 4 billion tonnes of food to feed over 7 billion people a year.

‘Rising populations in developing countries, alongside increasing wealth, urbanisation and changing dietary preferences are driving a dietary revolution, in which consumption of eggs, milk, meat and farmed fish is increasing much more rapidly than the consumption of staples or pulses. This in turn is driving changes in how animals are farmed. Poultry, pig and fish production is increasing fastest, and ever more animals are kept in high input-high output intensive systems.

‘These increases in animal numbers and changes in farming systems, against a background of high levels of endemic and epidemic disease would be expected to increase use of antibiotics in developing country agriculture.

Because the quantity of antibiotics used is the main driver of development of resistance to these antibiotics, animal agriculture in developing countries could have an increasing role in the development of antimicrobial resistant (AMR) pathogens.

‘While discovery of novel antimicrobials would support management of infectious bacterial disease into the future, over the last decades there has been a dramatic slow-down in the development of new antimicrobials, which increases the need to safeguard existing antimicrobials.

‘The report aims to identify key evidence gaps in our knowledge of livestock- and fisheries-linked antimicrobial resistance in the developing world and to document ongoing or planned research initiatives on this topic by key stakeholders.’ 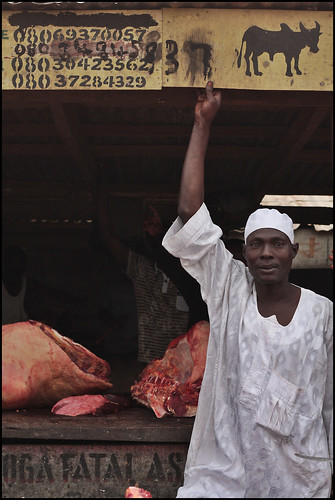 Other salient facts and developing-country issues

We do not have good data on the prevalence of AMR pathogens in livestock and fish and their products in developing countries. This is because systematic, national, iterative (repeated) surveillance programs are needed to generate good information on AMR in livestock, fish and food, and these types of programmes exist only in some EU and north American countries (WHO, 2014).

The large number and consistency of results make it very likely that AMR pathogens are common in animals, animal food products and agro-food environments in developing countries, but the literature is insufficient to draw firm conclusions on drivers or management of AMR or the contribution of AMR in agricultural systems to AMR illness in humans or animals.

There is some evidence that suggests agricultural use of antibiotics may not have very important human health impacts in developing countries:

Antimicrobial-resistant infections currently claim at least 50,000 lives each year in Europe and the US . . . and some estimate that drug-resistant infections will cause 10 million extra deaths a year and cost the global economy up to $100 trillion by 2050 . . . , with most impacts due to E. coli, malaria and tuberculosis (of these, only E. coli resistance could be linked to agricultural use). Reliable estimates of the true burden of AMR infections in developing countries do not exist. . . .

In developing countries there is a dual problem of overuse and lack of access to veterinary antibiotics. Many more animals die from lack of access to antibiotics than from resistant infections. Meta-reviews of studies from Africa suggest 10% of adult ruminants and 25% of young ruminants die prematurely each year, most from disease. . . . Others estimate livestock disease in Africa costs from $9 to $35 billion annually (Grace et al., in press). . . .

In developing countries there are related challenges of low livestock productivity and lack of animal source foods contributing to 2 billion cases of ‘hidden hunger’ due to micronutrient deficiencies. Antibiotics reduce feed requirements and increase weight gain by 2–15% . . . .

In many developing countries, human antibiotic use is relatively uncontrolled, and most community care is provided by the informal sector . . . . Most low and middle income countries report poor enforcement of antibiotic use policy and when human drugs cannot be well controlled, it is unlikely that veterinary drugs will be.

New approaches are needed to improve the performance of human and animal health markets, particularly in meeting the needs of the poor. This cannot be achieved by simply importing regulatory frameworks and approaches from the advanced market economies . . . .

Extensive and smallholder production appear to use relatively small amounts of antibiotics, and most is used for treating sick animals rather than disease prevention or growth promotion. . . .

There is consensus that antimicrobial use requires oversight, and that medical and veterinary use needs to be considered holistically. . . .

In poor countries, many more animals die from lack of access to antibiotics than from resistant infections. . . . [T]he OIE estimates that 25% of livestock production is lost due to disease globally . . . . In this context, measures to restrict the use of antibiotics in agriculture could have unintended consequences on income derived from livestock, livelihoods and nutrition.

Read about another paper on this topic co-authored by ILRI’s Tim Robinson: First global map of the rising use of antimicrobial drugs in farm animals published in PNAS, 25 Mar 2015.

One thought on “The rise of antimicrobial resistance (lethal) and animal agriculture (critical): Their links in developing countries”