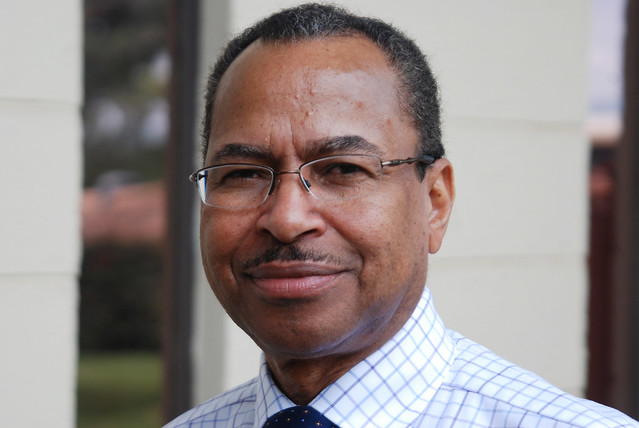 Industrialization is key to economic development, and agriculture—supplying raw materials for processing and value addition—is an essential component of that process. Comprising more than 40% of national GDP and producing the overwhelming majority of the Ethiopia’s food, smallholder farmers are at the centre of the country’s recent economic success. So declared the director general of the International Livestock Research Institute (ILRI), Jimmy Smith, in an agriculture panel discussion this week organized by the Economist magazine and held at the Sheraton Hotel in Addis Ababa.

The panel discussion, Building on Ethiopia’s agricultural roots, was one of many held as part of the Economist two-day Ethiopia Summit. Energy, finance, investment opportunities and innovation and technology were among the topics highlighted at the summit, which is part of a series of country summits bringing together industry and business leaders, government and ideas people.

‘Some of the work to improve animal feed, health and genetics, which has traditionally remained in the hands of the public sector, could be passed on to the private sector’, Smith said. ‘While it’s useful to look at large-scale farming, we need to focus on what makes agriculture more sustainable and as well as competitive.’

More than 250 policymakers and international, as well as local business leaders, explored the opportunities and the challenges in the government’s recently announced second growth and transformation plan (GTP II). Ethiopia is enjoying real GDP growth, forecast to average 7% a year for the next five years. The summit sessions focused on what more needs to be done for the country to achieve its full potential. ILRI evidence indicates that a major way to do that is to exploit and build opportunities for Ethiopia’s millions of smallholder animal farmers, both contributing to growth in national income and enhanced food security.

The agriculture panel discussion was chaired by Xan Smiley, editor at large at the Economist, with Khalid Bomba, chief executive officer of the Ethiopian Agricultural Transformation Agency, and Zelalem Messele, president of the Ethiopian Horticulture Producers Association.

A major focus of the Ethiopian government in GTP II is livestock. Smith said that’s smart, because the country’s—rising population, urbanization and incomes are stimulating spurring for meat, milk and eggs. A ‘business as usual’ approach to livestock, he warned, will almost certainly lead to severe food deficits in coming years. But with adequate investments in improving animal feed, health and genetics, animal-source foods could form as much as 8% of Ethiopian exports moving forward, fuelling growth and employment and greatly enhancing economic and nutritional security as well as equity.

‘Some of the work to improve animal feed, health and genetics, which has traditionally remained in the hands of the public sector, could be passed on to the private sector”, Smith said. ‘While it’s useful to look at large-scale farming, we need to focus on what makes agriculture more sustainable and as well as competitive.’

‘In future years, it’s predicted that about one-third of today’s African farmer’s will remain non-commercial due to long distances from markets and/or a worsening climate. Another third will transform their farms into commercial operations. The final third could go either way—into subsistence or market-oriented farming. We need to encourage the latter. We need to innovate our institutional frameworks so as to widen market access for smallholders. We need to connect Ethiopia’s many small-scale farmers to viable markets. This would act as a huge technological pull factor.’—Jimmy Smith, ILRI.

Producing, treating and storing animal feed is a real challenge in Ethiopia, but given that the country’s livestock productivity and yield gaps are so large, the potential gains from more and better animal feed are huge, Smith said. In coming years, more than two million smallholder farmers’ could move from substance to market-oriented farming, he said, if the private sector committed greater investments in animal feeds, breeds and health and if the country adopted more sustainable mixed crop-livestock production practices. ‘The spin-off benefits for nutritional security, job creation and economic development are immense.’

Bomba explained how the government’s focus in GTP has shifted from maximizing production and food security to productivity and value addition, and about moving smallholder farmers from subsistence to market-oriented output. Policy responses, continued Bomba, are being adapted by regional governments to meet various local challenges. In response to a prohibition on land ownership, for instance, the regional Amhara government has allowed smallholder farmers to lease farmland to allow other to form larger consolidated farms, which helps prevent land fragmentation caused by rapid population growth.

The government, Bomba added, is looking at many agricultural development models, one of which is ‘clustering’. This approach helps small farmers come together in cooperatives, for instance, to facilitate the acquisition of agricultural inputs and marketing of their produce, as well as determine which agricultural commodities can be most efficiently produced and under what circumstances. With more than 95% of the country’s farmers farming at small scale, the way forward, Bomba said, is not just promoting large-scale farming throughout the country, but rather better linking the country’s smallholders to commercial systems.