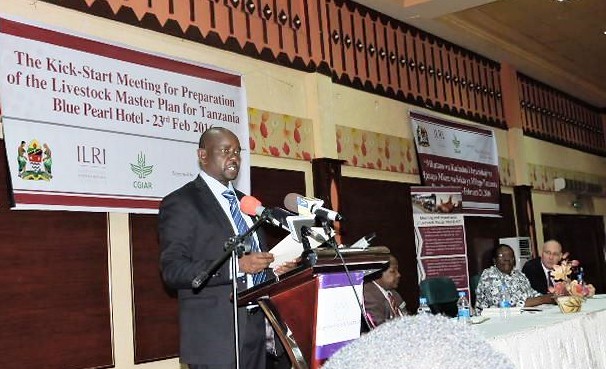 Tanzania’s livestock sector will benefit from a recently started project to transform it by guiding investments in the four main value chains comprising red meat, milk and products; poultry, eggs and pig meat.

The project will contribute to reducing poverty, raising the country’s GDP, increasing food and nutrition security and creating additional employment. Hon William Ole Nasha, the deputy minister in the Ministry of Agriculture, Livestock and Fisheries (MALF) launched the Tanzania Livestock Master Plan project (LMP), which is being formulated by the ministry with technical support from the International Livestock Research Institute (ILRI) and funding from the Bill & Melinda Gates Foundation (BMGF).

A livestock master plan is a vision-driven well-constructed road map with action plans that seeks to improve animal productivity and production, as well as the value addition of key livestock value chains. The Tanzania LMP will be developed with consultations of livestock experts and stakeholders to come up with relevant and realistic interventions to address challenges they are facing and take advantage of available opportunities. In Tanzania, the master plan will converge with and complement the Agricultural Sector Development Programme II (ASDP II), the Tanzania Livestock Modernization Initiative and influence formulation of future indicators in the livestock sector. Other countries interested in developing a Livestock Mater Plan include Uganda, Kenya, Rwanda, and India. Ethiopia has already done one for the period 2015–2020.

The kick-start meeting for the project was held in Dar es Salaam on 23 Feb 2016 and was attended by about 100 delegates including researchers, scholars, development partners, livestock experts, livestock keepers and representatives of government agencies, academia, civil society and the media.

Livestock stakeholders have welcomed the project, saying it is timely and they appreciate being involved in the LMPs development.

During the kick-start, Hon Ole Nasha (MP) lauded the project saying ‘the master plan is being prepared by Tanzanian experts and it envisages a modernized, highly productive livestock sector that will attract investment’. He assured the government’s full support to the preparation of the Master Plan and its implementation once it is ready and thanked ILRI and the BMGF for their support and cooperation.

Permanent secretaries for Livestock and Fisheries (Maria Mashingo and Yohana Budeba respectively) and the director of policy and planning Catherine Dangat also attended and facilitated the kick-start.

When welcoming the deputy minister, Iain Wright represented ILRI’s director general to thank the ministry and BMGF for giving ILRI the opportunity ‘to provide livestock planning, training, technical backstopping and mentoring to senior MALF staff to build institutional capacity for evidence-based investment planning. Wright also noted that besides contributing to national development goals, the LMP would also support the protection of the environment by helping farmers to adapt to climate change. Barry Shapiro, the ILRI project adviser shared the experience in developing a similar master plan in Ethiopia and Stephen Michael, a staff and member of the LMP team from MALF presented the roles of various stakeholders in the process of preparing the Tanzania LMP.

This post is by Mercy Becon, communications officer with ILRI in Tanzania.