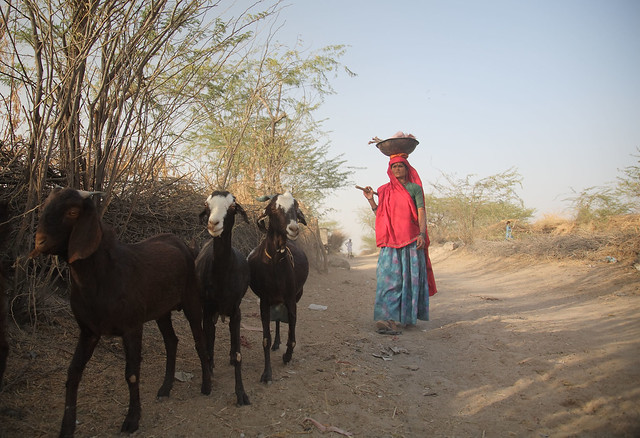 One of the fastest growing subsectors in agriculture–livestock–can significantly contribute to the United Nations’ Sustainable Development Goals (SDGs) if the opportunities it offers, especially for people in developing countries, are harnessed for economic growth, improved livelihoods and food and nutritional security.

Five of world’s top six commodities in terms of commercial value are animal-source foods, which are worth over USD700 billion annually and there is increasing demand for them in developing countries.

Speaking at a seminar co-hosted by the Texas A&M College of Veterinary Medicine & Biomedical Sciences (CVM), Borlaug Institute for International Agriculture, and Texas A&M One Health Initiative on 1 Mar 2016, Tarawali presented a developing-country perspective of the key role that small-scale livestock producers, processors and sellers can play in achieving the SDGs. She also gave overviews of the institute’s current research and its anticipated outcomes.

Tarawali grouped the 17 SDGs into four ‘clusters’ to aid quick identification of the roles played by the livestock sector in the SDGs. Her clustering, listed below, is similar to that of the Global Agenda for Sustainable Livestock (GASL) and the Livestock Global Alliance (LGA).

Countries such as Ethiopia and Tanzania, Tarawali said, are working with ILRI to identify high priorities for transforming the livestock subsector through improved delivery systems, markets and institutions so that it drives greater and broader-based economic growth.

ILRI is also focusing on specifically improving the livelihoods of women livestock producers, marketers and other value chain actors. And initiatives such as ILRI’s index-based livestock insurance are protecting pastoralists in the Horn of Africa against drought-related livestock losses and dependence on food aid.

Animal-source foods are key to food and nutritional security in developing countries, Tarawali said. ‘But we need healthy food from healthy animals that are not spreading disease’. ILRI and partners are addressing emerging diseases coming from animals and their products. In India, Kenya and Vietnam, for example, ILRI is training milk and meat producers and sellers on hygienic handling to improve access to safer livestock products.

‘We’re also developing new livestock feeding and genetics options to enable developing-country farmers and herders to produce more food with fewer animals. These interventions will help small-scale food producers to meet the rising demand for livestock products while at the same time enabling them to reduce the amount of greenhouse gases emitted per unit of animal-source food produced.’

Tarawali described several global initiatives that are advocating the role of livestock in meeting the SDGs. She said these groups are building on existing livestock sector programs and structures and are working to better coordinate their work and messaging so as to advance understanding of, and investment in, the large role livestock can play in achieving many of the SDGs.

‘We need to understand what new livestock evidence is required by our donor agencies and partners; to better articulate the evidence we have at hand now; to combine relevant national, regional and global livestock datasets in useful syntheses; and to build on the collective strengths of other development players.’

Listen to a recording of ‘The role of livestock in achieving the SDGs’.

One thought on “Harnessing livestock for the Sustainable Development Goals”