This year for the first time the High-Level Political Forum is featuring events exploring the essential contributions of the livestock sector to achieving the Sustainable Development Goals (SDGs). ILRI Director General Jimmy Smith is at the UN this week to offer evidence-based insights into the close relationship between livestock and sustainable development.

The theme of this year’s forum is ‘Eradicating poverty and promoting prosperity in a changing world’. Four of the SDGs being reviewed in depth are:

Throughout the week, the ILRI director general will speak on the ways livestock livelihoods in developing countries can help achieve these goals. About latter goal, Smith warns:

Because of the unique roles of livestock in women’s lives, we’re not going to achieve gender equity and empowerment of all women and girls (SDG5) without deliberate efforts to build upon the multiple and enabling roles that livestock play in female livelihoods worldwide.
—ILRI’s Jimmy Smith

A recent opinion piece on this subject was written by Isabelle Baltenweck, an agricultural economist and deputy leader of ILRI’s Policies, Institutions and Livelihoods program. Her piece was published by the Thomson Reuters Foundation News. What follows are some of Baltenweck’s key messages. 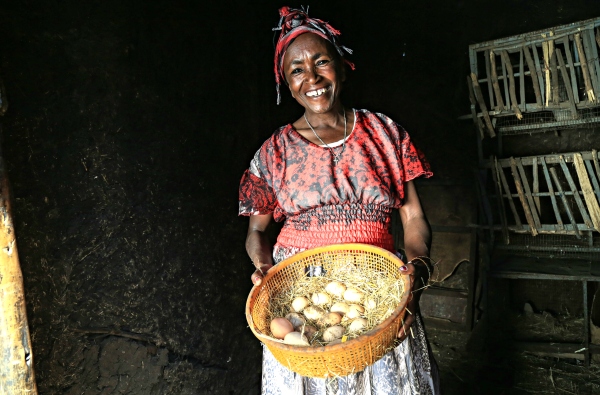 It’s a well-known adage that teaching a man to fish will feed him for a lifetime. But give a woman a cow, and she might still have to ask her husband’s permission to milk it.

‘While women in developing countries assume much of the burden of raising household chickens, sheep and other farm animals, they receive relatively few of the benefits.

‘It is typically men rather than women who own the family stock as well as land, men who control the income that the animals generate, and men who have the better access to financial credit and new technologies.

‘The frequent exclusion of women from livestock ownership, resources and decision-making— an inequality that remains all-too-common in low- and middle-income countries—is a major factor in hindering households from escaping poverty.

‘But given the same resources and opportunities, women would be in position to equal men in transforming their family farms into profitable and environmentally sustainable enterprises. . . .

At the International Livestock Research Institute (ILRI), we call this a ‘WILD’ (‘Women In Livestock Development’) opportunity.

‘. . . And as women are typically closely involved in all aspects of animal husbandry—from feeding, milking and mating animals to caring for the young, sick or injured—technologies and resources that make livestock farming more efficient and productive should be made readily available to women. This might include market information, animal disease diagnostic kits and vaccines, land for planting fodder crops, and labour-saving chaff cutters for cutting up straw for feed. . . .

‘What we have then seen is that oftentimes, when women gain greater control over their livestock-derived incomes, the whole family benefits. This is because women in the developing world traditionally prioritise their spending on food for the household and education for their children. . . .

‘Tackling culturally embedded gender inequality is, of course, no simple task anywhere, and some would argue is a particularly complex issue among traditional livestock-keeping communities. But we know that livestock are among the most important assets of poor households, and among the most potent instruments of development. And we know that, given adequate resources, women can be formidable engineers of—as well as entrepreneurs in—livestock-based development.

If teaching a man to fish will feed him for a lifetime, imagine what enabling a woman to profit fully from her livestock enterprises would do: it could feed whole families, communities and nations—for a lifetime. . . .
—ILRI’s Isabelle Baltenweck

Read the whole opinion piece by ILRI’s Isabelle Baltenweck on the website of the Thomson Reuters Foundation News: Capitalising on the potential of women in livestock development, 6 Jul 2017.