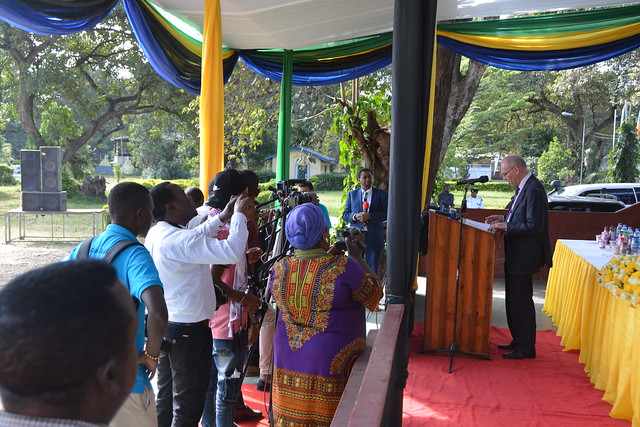 Iain Wright, ILRI’s deputy director general for Research and Development, gave the keynote address at Tanzania’s first National Livestock Fair held in Arusha, Tanzania on May 30, 2018. The fair was organized under the auspices of the Agricultural Council of Tanzania (ACT) in collaboration with Tanzania Dairy Board (TDB) and TANTRADE, with the support of the Ministry of Agriculture, Livestock and Fisheries (MALF). The expo ran from May 29 to June 1, and was timed to overlap with World Milk Day, established by the Food and Agriculture Organization (FAO) to recognize the importance of milk as a global food, which has been held on June 1 every year since 2001.

Despite having one of the largest cattle populations in Africa, Tanzania has struggled in recent years to fulfill the sector’s potential. Livestock contributes 7% to Tanzania’s total GDP, and constitutes just 13% of the country’s agricultural GDP. These numbers are relatively low. Some comparisons: Kenyan livestock contributes 12% to the country’s GDP and constitutes 42% of its agricultural GDP. And while dairy contributes just 1.5% to Tanzania’s GDP, Kenyan dairy, with 18 million cows—some 10 million fewer than Tanzania—contributes 8% to that country’s larger overall GDP.

Worldwide, five of agriculture’s top ten commodities are animal-sourced; in Africa alone, the market value for animal-sourced foods is expected to rise to USD151billion by 2050. Tanzania is home to over 11% of Africa’s cattle and more than half of Tanzania’s rural households derive at least part of their income from livestock.

While the Tanzanian government has prioritized transforming the agricultural sector—in the landmark 2007 Agricultural Sector Development Program (ASDP) and its successor, the 2016 ASDP II—implementation of those plans, and the absence of clear roadmaps to develop the livestock sector in particular, have hindered development. The result has been low livestock reproductive rates, low productivity per animal and high disease prevalence and animal mortality.

Wright emphasized that while livestock is a relatively underutilized resource in Tanzania, judicious public and private investments in the sector could not only yield high rates of return, but put the country on the path toward self-sufficiency in animal-sourced foods. World Bank statistics show that the use of inputs and services increases livestock productivity significantly but that access is limited. The 20% of households that do use extension services earn three times more than those who don’t.

The bottom line, said Wright, is that ‘by acting now, together and coherently, Tanzania can unleash huge potential to become a leader in livestock production in Africa’. 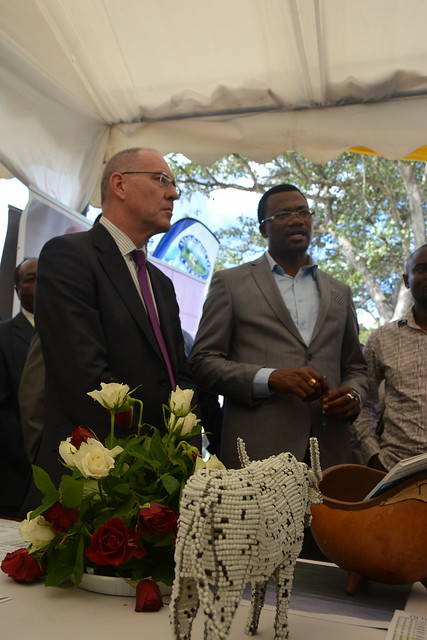 ILRI’s Iain Wright and the Tanzanian Minister of Livestock and Fisheries, the Hon. Luhaga Mpina (MP), at the ILRI booth during the National Livestock Expo and Milk Week, held in Arusha, 31 May to 1 Jun 2018.

ILRI recently worked with the Ministry of Agriculture, Livestock and Fisheries to develop a livestock master plan for Tanzania. The focus of the plan is on three major sectors: Red meat (including cattle, sheep, goats), white meat (pig and chicken) and dairy. The models suggest that Tanzania could become self-sufficient in overall meat and dairy production by 2031, even given the country’s rapidly growing population and a projected increased per capita demandfor animal source food, provided that the necessary investments are made starting now.

Wright pointed out that while there are 74 dairy plants in Tanzania, they produce mostly short-shelf-life products such as pasteurized and fermented milk and yoghurt. The seasonal variation in milk production—cows tend to be more productive during the rainy season, when forage is freshest and most abundant—means that the plants operate at only 30% capacity. Greater investments in long shelf-life dairy processing and greater enforcement of good-quality standards could significantly increase the sector’s productivity.

ILRI has worked for more than 20 years in Tanzania, in partnership with an array of research and development organizations. Among the programs it is currently partnering with are the Sustainable Rangeland Management Project (SRMP), the African Chicken Genetic Gains (ACGG) project, the Dairy Development Forum (DDF), and a project to scale out use of a vaccine against East Coast fever. ILRI is also partnering with the Tanzania Dairy Development Forum to promote links between smallholder farmers and regional platforms to help farmers grow their herds, address feed security and fill gaps in dairy technology.

Watch the short ILRI photofilms: ‘Cows in the city—A living from milk’, 2014, and ‘Living from milk: Transforming dairying in Tanzania’, 2014.