While the potential harms of raising livestock and consuming meat, milk, and eggs are frequently discussed in the Western media these days, their benefits for much the world’s population, especially in developing countries, get less attention. In low-income countries, animals remain essential for nutrition, livelihoods and crop farming. The good news is that there’s a lot that can be done to promote a sustainable, broad-based and environmentally friendly livestock sector.

In a meeting at the World Economic Forum’s Sustainable Development Impact Summit Sept. 25 in New York, thought leaders in food and agriculture discussed the future of meat and how it can contribute to sustainable development. 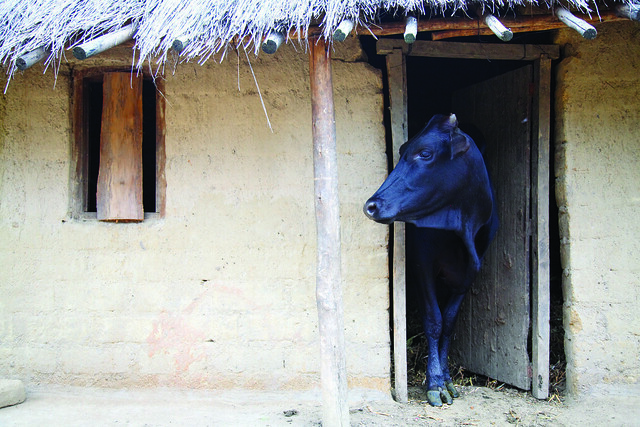 Dairy cow looks out from her stall in a village in central Malawi (photo credit: ILRI/Stevie Mann).

‘Concerns about livestock—relating to animal welfare, human health, the environment and antimicrobial resistance—are becoming increasingly prominent,’ said IFPRI Director General Shenggen Fan. Considering the crucial role livestock plays for food security and nutrition, it’s increasingly important that organizations not neglect the perspective of people in the emerging and developing world, for whom livestock are not ‘simple food commodities’, Fan said, but rather ‘living animal assets’ that remain essential sources of livelihoods.

Fan’s remarks were developed in collaboration with the International Livestock Research Institute (ILRI), a CGIAR research center based in East Africa dedicated to animal agriculture research for the developing world.

‘We were delighted to work with our long-time friend and colleague Shenggen Fan to address this distinguished group of scientists, policymakers and entrepreneurs,’ said Shirley Tarawali, ILRI’s Assistant Director General. ‘Livestock won’t be the answer to 21st-century protein needs, but it will remain one of the answers.’

Tarawali observed that the demand for meat, milk and eggs is soaring in the developing world, a result of urbanization, population growth, and rising household incomes. ‘Most of that demand will be met by local, small- and medium-scale farms, of one or two hectares that even today produce more than a third of the world’s agricultural output,’ she said.

The summit, held concurrently with the annual meeting of the UN General Assembly, aims to accelerate public-private cooperation and deploy new technological solutions to deliver on two of the world’s grandest ambitions: The 2030 Agenda for Sustainable Development and the Paris Agreement on climate change.

‘To meet increasing demands for livestock-derived foods, transforming livestock systems through investments and policies will be key’, Fan said.

In order to make meaningful progress in improving the lives of the world’s poorer populations, organizations must start from where these people are today and from what assets they have access to, Fan and Tarawali agreed. The good news is that there are big—really big and as yet little supported—opportunities in the livestock sector of the Global South to do much human and environmental good while mitigating much human and environmental harm. ‘Stakeholders will need to come together to promote lasting solutions to ensure a sustainable and healthy food future’, said Fan.