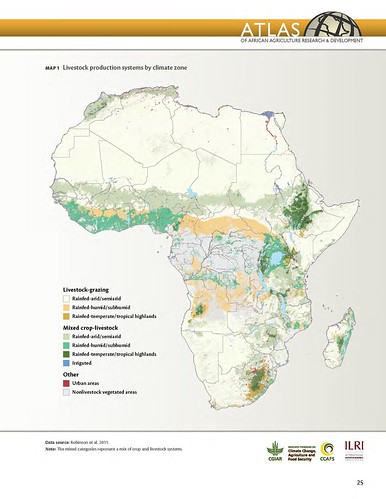 Livestock and Mixed Crop-Livestock Systems in Africa by Philip Thornton

What is this map telling us?
Livestock-producing agricultural systems cover 73 percent of Africa and stretch across several climates (Map 1). To some extent, these climates determine what type of farming is practiced. In Africa, livestock-producing systems are broken into two main categories: livestock and mixed crop-livestock. These systems exist in three common African climates: arid/semiarid, humid/subhumid, and temperate/tropical highlands.

Livestock systems are most prevalent on grazing lands in arid climates that cover large swaths of Africa. Mixed crop-livestock farming systems are either rainfed or irrigated. Rainfed systems are much more common (although areas of Sudan and Egypt have important irrigated mixed systems that present different opportunities and constraints).

Why is this important?
Many studies have found the influences of crop and livestock production vary considerably, not only regionally but also according to production system (Robinson et al. 2011). Globally, but particularly in Africa and Asia, crops and livestock are often interdependent and influence farmer households and livelihoods in a number of ways. Detailed knowledge of crop and livestock systems and their distribution allows researchers to measure impacts on everything from the environment to livestock disease risk.

For example, viewing the livestock density by type and region helps researchers measure the level of environmental impact. Classification of agricultural systems can also provide a framework for predicting the evolution of the agricultural sector in response to changing demography and associated shifts in food demand, land use (for example, competition for land from food, feed, and biofuel production), and climate.

One thought on “New map: Livestock and mixed crop-livestock systems in Africa”