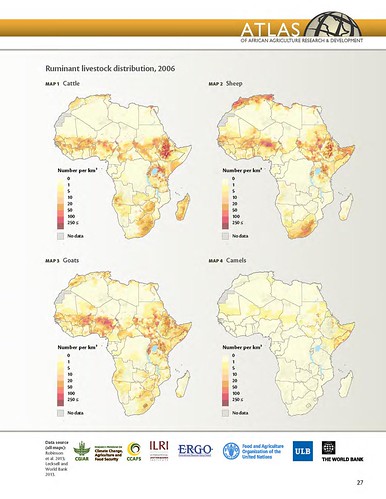 What are these maps telling us?
Ruminant livestock are raised across large parts of Africa where environmental conditions allow. Cattle, sheep, and goats are the most widespread, while camels are restricted to drier areas, particularly in the Horn of Africa and the arid parts of western Africa. These maps of ruminant dis­tribution should, however, be used in conjunction with the livestock production systems map to better under­stand the systems and climate zones where ruminant live­stock are found.

The role of livestock varies greatly depending on the production system. The heavily forested areas and hyperarid deserts of Africa have very low densities of live­stock. In arid and semiarid regions of Africa, where the poten­tial for crop growth is limited, cattle, sheep, goats, and camels are raised in low productivity, pastoral (extensive livestock grazing) systems in which ambulatory stock can take advan­tage of seasonal, patchy vegetation growth. In these areas, raising livestock is the only viable form of agriculture.

In the more settled humid, subhumid, and tropical highland areas, cattle and small ruminants largely live in the same areas as the human population. In these mixed crop-livestock farming systems, livestock can increase crop production by provid­ing draft power and manure, and by enhancing labor pro­ductivity. At the same time, organic material not suited for human consumption can be converted into high-value food and nonfood products, such as traction, manure, leather, and bone.

Why is this important?
Poverty in Africa remains widespread.One quarter of the world’s estimated 752 million poor livestock keepers live in Africa south of the Sahara (SSA), where more than 85 percent of them live in extreme poverty (Otte et al.2012). Agricultural productivity gains and diversification into high-value prod­ucts such as livestock are essential ways of raising rural incomes and improving food security in such areas.

For three reasons—the large share of the rural poor who keep livestock, the important contributions livestock can make to sustain­able rural development, and the fast-growing demand for live­stock products—diversification into livestock and increased livestock productivity must play an integral role in strategies to reduce poverty and increase agricultural productivity.

Progress in poverty reduction will require well-targeted inter­ventions to promote economic growth that the poor can contribute to and from which they can benefit. Livestock maps such as these, along with other information such as pov­erty and production systems, can contribute significantly to better targeting.