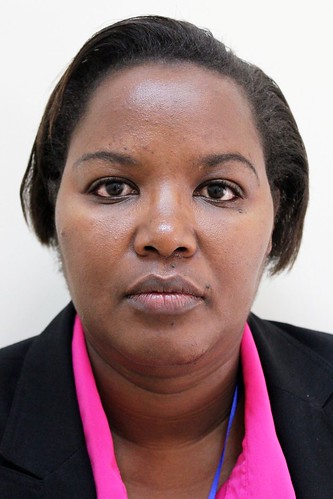 Gerardine Mukeshimana has been appointed minister of agriculture and animal resources in Rwanda (photo credit: ILRI).

Gerardine Mukeshimana, a plant researcher working at the Biosciences eastern and central Africa-International Livestock Research Institute (BecA-ILRI) Hub in Nairobi, Kenya, has been appointed minister of agriculture and animal resources in Rwanda.

Mukeshimana has been working as a plant scientist at the BecA-ILRI Hub where her focus has been on using molecular virology, plant transformation, genomics and bioinformatics tools to develop strategies to control the spread of aphid-transmitted virus diseases in the common bean. She was also contributing significantly to capacity building and resource mobilization to better support African national agricultural research systems.

Jimmy Smith, the director general of ILRI, congratulated Mukeshimana on the appointment on behalf of the entire ILRI community and remarked, ‘this is tremendous news, we will do all we can to support Gerardine, and look forward to working with her in her new capacity’.

‘Gerardine’s appointment is a recognition of the values of a true scientist, a great leader and a strong advocate for African agricultural development that we all saw in her,’ said Appolinaire Djikeng, the director of the BecA-ILRI Hub. Djikeng further added that ‘we are excited by this appointment and we believe it is a testament to the importance of the work we do at the BecA-ILRI Hub and the caliber of the people that we attract for our mission.’

‘I am absolutely pleased and proud of Gerardine’s appointment. It gives her an opportunity to contribute to African agricultural research at a larger scale,’ said John Carr, a researcher in the department of plant science at the University of Cambridge, UK, the principal investigator who worked with Mukeshimana in her bean project.

Her passion to make food and nutritional security in Africa a reality has resulted in recognition for international awards. In 2012, she was recognized by the United States Agency for International Development’s Board for International Food & Agriculture Development (BIFAD) for her significant contributions to the breeding of the common bean for drought tolerance and disease resistance. She also received a Norman Borlaug Leadership Enhancement in Agriculture Program (Borlaug LEAP) fellowship for key contributions to breeding of the common bean.

Mukeshimana has previously served in different roles in education, agriculture and rural development sectors in Rwanda and she has conducted research in Africa, South America and the USA. She holds both PhD and MSc degrees in plant breeding, genetics and biotechnology from Michigan State University (USA), and an agriculture engineering degree from the National University of Rwanda.