The following appreciation is written by Sam Black.

Noel Murphy died on Friday 16 January 2015, leaving the world devoid of a gentleman and scholar, and his friends and family bereft of a pillar of quiet strength, wisdom and thoughtfulness.

Noel trained in bacterial molecular genetics at Trinity College Dublin. For his doctoral research, Noel undertook the most ambitious DNA sequencing projected attempted in Ireland at that time. He joined the Université libre de Bruxelles in 1984, where he held an EMBO postdoctoral fellowship and conducted seminal studies on trypanosome variable surface glycoprotein associated gene expression and transposable elements.

At ILRAD and then ILRI, Noel served as a lynchpin of the molecular biology program for 14 years, from 1987 to 2001, making major contributions to understanding molecular mechanisms of drug resistance, signaling and programmed death in African trypanosomes and the mechanisms of resistance to trypanosomiasis in [Africa’s wild] Cape buffalo.

Noel returned to his beloved Dublin in 2001, first to join the Department of Genetics at Trinity College, and then, in 2005, the National University of Ireland Maynooth, in the Department of Immunology and Biology. He was a founder member and subsequent Director of the Program in Immunology and Global Health at NUI-Maynooth, an award-winning post-graduate program in science and engineering.

Noel cared passionately about helping students from sub-Saharan Africa achieve their educational goals and promoted this as a long-term member of the executive committee of the Irish Forum for Global Health and the Young Scientist’s Program in Tanzania.

Noel lives on in his wife Anne; his son Daniel; his daughters Aisling, Neala and Abbie; and in the memories of a legion of friends and students whose lives he enriched. Daniel and Noel were the first father and son combination to receive PhDs in genetics from Trinity College in Dublin and I had the good fortune to join them, Anne and members of the Department of Genetics at Trinity College in raising a glass in celebration on that special occasion.

Noel was a dedicated and innovative scientist, educator and administrator, a family man whose house was filled with warmth and laughter and the kindest and truest of friends. I cannot put into words how much I miss him.

Sam Black
is professor and head of the Veterinary and Animal Sciences Department at the University of Massachusetts (Amherst) and a former science leader himself at the International Laboratory for Research on Animal Diseases (ILRAD), now the International Livestock Research Institute (ILRI).

Noel hugged by his wife, Anne.

Below are a few excerpts of a few of the many other condolence messages received at ILRI.

Derek Nolan
As a friend and colleague who worked with Noel on many projects over the years at Brussels, ILRI, Trinity College and NUI-Maynooth, I can only echo what Sam has said. Noel was a gifted scientist, a superb experimentalist, an inspirational teacher, a wonderful father and loving husband. A gentle and generous spirit, it is one of the great privileges of my life to be able to say he was my friend. I was always the better for meeting Noel and I will miss him deeply.

Ross and Maureen Gray
The loss of so many colleagues of relatively young age [Noel Murphy in 2015, Declan McKeever in 2014, Tom Dolan in 2007] is shocking and very sad.

Barbara Burleigh
It is a reminder of how amazing the ILRAD/ILRI community is. Noel was loved and respected by everyone.  It is terribly sad.

Phelix Majiwa
The whole ILRAD/ILRI family is poorer. I am completely at a loss of words.

Vittoria Lutje
Noel’s death has been a great shock to all of us. Jon [Wilkes] went to the funeral in Dublin on Tuesday which was attended by almost everybody who could make it from this northern parts.

Dennis Grab
What a beautiful family Noel has left behind. . . . It is devastating news. Noel WAS one of the KIND ones from the ILRAD days.

John Donelson
So sorry to hear about Noel.  Also, I didn’t know Declan had died.  I did know about Tom.  All three gone much too soon.

Sue Welburn
This is such sad news. Noel was a lovely generous man who will be missed so.

Carlos Seré
Noel had left ILRI by the time I became director general but I visited him in Dublin once and found him very keen to cooperate with ILRI. 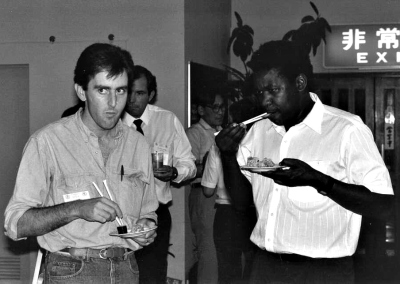 Noel Murphy (left, looking uncharacteristically suspicious), with fellow tryps researcher Phelix Majiwa at some science meeting somewhere in Asia, ‘back in the day’.