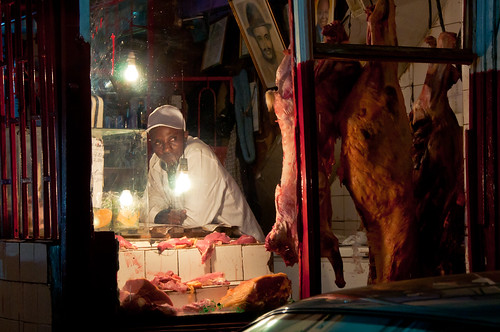 A new book compiling 25 contemporary studies
on food safety in Africa’s informal markets
offers (surprising) lessons
for much of the developing world.

In case you missed it, the following excerpts are taken from an opinion piece, What’s eating sub-Saharan Africa?: New lessons in food safety and security from the food stalls of Africa’s ‘wet’ markets, published in Al Jazeera on 27 Jan 2015 and written by Delia Grace, a veterinary epidemiologist and food safety expert based in Nairobi, Kenya, at the International Livestock Research Institute (ILRI), and Kristina Roesel, coordinator of ILRI’s Safe Food, Fair Food project, based in Kampala, Uganda, and published in Al Jazeera on 27 Jan 2015.

‘Across the food-challenged regions of sub-Saharan Africa, the sustenance provided by livestock and seafood – milk, meat, eggs, and fish – is far more important than it is in wealthy countries. For most Africans, particularly the poor, there are no alternatives that can supply anywhere near the same level of protein and micronutrients. To get the same amount of vitamin A in just 100g of sardines, you would have to eat 17 bananas.

‘But along with the high nutritional value of these foods comes high risk.

Around the world — but especially in developing countries — meat, milk, eggs and fish are the foods most likely to carry dangerous and all-too-often deadly pathogens like salmonella and E. coli.

‘Food safety is starting to get more attention in Africa and elsewhere in the developing world, which should be a good thing. Unfortunately, the attention carries the risk of intensifying both poverty and food problems by pushing governments to adopt high standards that end up damaging markets that are an essential source of food and income for a billion of the world’s poorest people.

‘The issue is that food safety concerns in the developing world can quickly focus on what appear to be most obvious targets: informal food markets, such as the bustling, unruly “wet markets”, where freshly butchered meat and fish is sold in open-air kiosks typically lacking refrigeration, and the urban street vendors, such as the ubiquitous “milk hawkers” plying the morning rush hour in Nairobi with “chupa ya maziwa” — bottles of unpasteurised product.

‘A closer look reveals a much more complicated, and often counterintuitive, picture. For example,

the carefully shrink-wrapped meat available in the shiny new western-style supermarkets opening up across eastern and southern Africa can be less safe than a piece of beef hanging from a ceiling hook in the rudimentary stalls of wet markets.

‘That finding is among the important insights provided in a new book compiling 25 contemporary studies that focus on food safety in Africa’s informal food markets — and which offer lessons relevant for much of the developing world.

An important finding is that informal vendors account for the great majority of meat and dairy purchased in sub-Saharan Africa, where they are often the only source of such foods available.

‘These informal food vendors will remain predominant for decades to come because even when incomes rise, many consumers still prefer to buy directly from producers who sell fresher, cheaper and more local kinds of food (supermarket prices are frequently double those of informal markets and you need a car to get to them).

‘And because Africa’s smallholding farmers are rarely sought out to supply supermarkets, selling livestock products — by far and away the most valuable of all farm commodities — in informal markets is often the only thing providing households with a regular cash income.

‘That said, informal markets — given their prominent role in feeding the developing world — must play a role in reducing food-borne illnesses. Unsurprisingly, analyses of informal sellers show that over-ripe meat and seafood in wet markets, and milk souring on the back of a milk hawker’s bicycle, can contain hazardous pathogens such as E. coli, brucella and campylobacter. And these pathogens are particularly burdensome in poor countries. . . .

This new research indicates that government officials would be wise not to follow [erroneous] conventional wisdom about food hazards and shut down informal food sellers.

‘. . . For example, in Kampala, Uganda, the city council tried to shut down informal markets selling pork after a superficial investigation by a government veterinarian who claimed local butchers were not using safe practises. But further investigation revealed the meat posed little risk.

‘Heavy-handed moves like this ultimately do little to improve food safety but they can do a lot to intensify hunger and poverty in regions where both are already big problems.

‘We have examples of approaches to food security that have worked in Africa.

A recent push to improve handling practises among milk hawkers in Kenya reduced food-borne diseases. Training [informal milk] vendors and offering them incentives — rather than punishing them — resulted in lasting benefits worth $28m per year.

‘. . . Efforts to improve food safety — whether in developed, emerging or developing economies, but particularly in the latter — need to be informed by good understanding of the (very) different ways people produce, purchase, consume and value food in different parts of the world.

‘With such understanding, we can do much to help reduce the illnesses people suffer from their daily meals without imperilling their food security or livelihoods.

Healthy foods must be nutritious, safe and fair, guest commentary published on the Global Food for Thought blog of the Chicago Council on Global Affairs, 10 Apr 2015, written by John McDermott, of the International Food Policy Research Institute (IFPRI) and director of the CGIAR Research Program on Agriculture for Nutrition and Health (A4NH), and Delia Grace, of the International Livestock Research Institute (ILRI), where she leads a program on Food Safety and Zoonoses and a flagship of A4NH on ‘Agriculture Associated Diseases’.

One thought on “Managing the most nutritious, and riskiest, foods in the informal markets of developing countries”