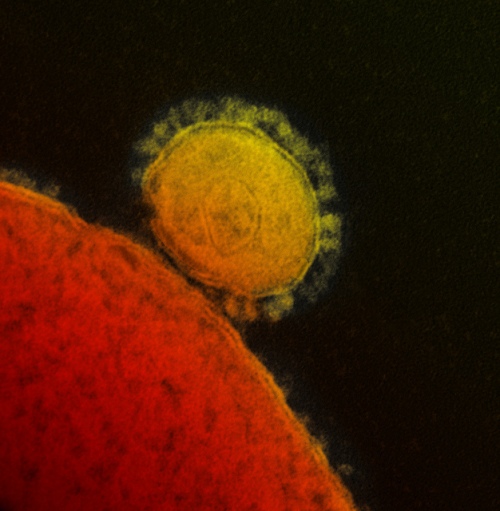 A new study published in the science journal Emerging Infectious Diseases reports that two individuals in Kenya have tested positive for the presence of antibodies to Middle East Respiratory Syndrome coronavirus (MERS-CoV). Neither person is ill or recalls having any symptoms associated with MERS.

There is no evidence of a public health threat and scientists concluded that the infections caused little or no clinical signs of illness. But they plan follow-up studies, as this is the first indication of a MERS-CoV infection that is not connected to primary infections in the Middle East.

The antibodies were discovered in serum samples taken as part of a broader household disease surveillance survey conducted in 2013 and 2014 in eastern Kenya in Garissa and Tana River counties. The two samples that tested positive for MERS-CoV antibodies were taken from a 26-year old woman and a 58-year old man in Tana River County.

The authors of the study include scientists from the Nairobi-based International Livestock Research Institute (ILRI), the Kenya Ministry of Health, the University of Bonn Medical Center.

While most of the human cases have involved human-to-human transmission in hospital settings, dromedary camels—the single-humped camel that is common in the Middle East and the Horn of Africa—are considered a major reservoir for the disease.

According to the World Health Organization, about 36% of reported patients with MERS-CoV have died, with the most severe cases occurring in older people, people with weakened immune systems and patients already suffering from cancer, chronic lung disease or diabetes.

While most of the discussion of MERS-CoV has rightfully focused on infections that caused severe illness or death, scientists have confirmed that people can become infected with MERS-CoV and suffer either mild symptoms or no symptoms at all.

Conclusions
‘The absence of autochthonous human MERS-CoV infections in Africa has triggered hypotheses regarding differences in disease transmission between Africa and the Arabian Peninsula and has raised doubts regarding the role of camels as a source of infection. Our study provides evidence for unrecorded human MERS-CoV infections in Kenya. The proportion of seropositive specimens that we found is comparable to previously reported proportions of unrecorded infections in the general population in Saudi Arabia. . . . Because of an apparently low infection rate and a bias toward reporting severe cases, the discovery of unreported MERS cases requires testing of large sample sizes with well-validated serologic methods. . . .

‘The lack of a well-developed public health system in parts of Africa could lead to underdiagnosis of clinical cases and would therefore prevent case notification. Moreover, less accessible hospital care might preclude large nosocomial outbreaks as have been observed in countries on the Arabian Peninsula and in South Korea. Other possible explanations for the absence of confirmed and reported clinical cases of MERS-CoV infection in Africa include lesser virulence of strains from Africa and cultural differences that might cause persons of different age ranges to be exposed to the virus. . . .’

This is the first time MERS-CoV antibodies have been detected in humans in Africa who had no known connection to the Middle East. The presence of these antibodies could mean one or more of the following, but we need to do more research to determine the circumstances.

The authors of the study believe the two individuals from Tana River who harbour antibodies to the disease were probably infected with MERS-CoV ‘a considerable time’ before the blood samples were collected and the infections likely were ‘mild or subclinical’, meaning there was no obvious evidence of illness.

Primary MERS-CoV infections are possible in Africa, but they could involve a less virulent form of the virus that does not cause the severe illness seen in patients in the Middle East.

There is no evidence of a MERS-CoV outbreak in Kenya or elsewhere in the region, nor does the study indicate an immediate risk of MERS-CoV in Kenya or anywhere else in sub-Saharan Africa.

ILRI experts say there does not appear to be an immediate threat to humans in the region given that there is no evidence of widespread infection or serious illness from the MERS-CoV occurring in East African camel country.

One-Health approach employed
The findings pave the way for better surveillance of the disease in Africa that may be passed from animals to humans. MERS-CoV infections in the Middle East may have originally come from camels. The tests that uncovered the Kenya infections are part of a broader effort by ILRI and Kenyan health officials to identify ‘zoonotic’ threats—diseases that pass from animals to humans—before they become a serious problem for humans.

Scientists note that their ‘One Health’ approach—which looks at how human health is affected by interactions with animals and the environment—draws from lessons learned in the fight against Ebola and HIV/AIDS, two zoonotic diseases whose impact on human health would have been greatly reduced if they had been identified early in their transition from animals.

The samples collected in Tana River and Garissa counties were tested for MERS-CoV as part of a broader effort led by ILRI to look for any signs of zoonotic diseases, which are diseases being passed between animals and humans, before they become a more widespread problem.

Some 75% of the world’s dromedary camels live in Africa, with large concentrations of the animals found in Kenya and Somalia. Previous studies have isolated MERS-CoV antibodies in dromedaries in Africa. Some of the samples testing positive were collected 30 years ago but were only recently tested for MERS-CoV.

There are considerable populations of camels in the Tana River, but the man and woman who had antibodies indicating a previous MERS-CoV infection did not own camels of any kind and could not recall specific contact with the animals.

Camels roam widely in the regions and there are many opportunities for people to have contact with the animals, and many people in the region consume camel products, including camel meat and milk. But thus far, scientists studying the disease have not been able to pinpoint how camels might be passing along the virus to humans.