BETTER SCIENCE, BETTER LIVES
The International Livestock Research Institute (ILRI),
headquartered in Africa and working in poor countries
worldwide to provide better lives through livestock,
held its Institute Planning Meeting from 4 to 7 Oct 2016.
This is the second of a series of blog articles reporting on
plans for ILRI research programs, including ILRI’s
work in west and southern Africa and south, east and southeast Asia. 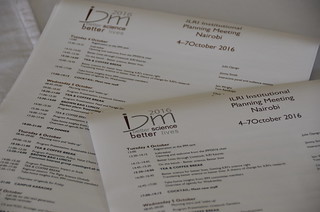 The program promotes a trans-disciplinary approach to health to accomplish three main objectives:

Both the geographic spread and product lines
of ILRI’s new Animal and Human Health program
are extensive, reaching from sub-Saharan Africa to
East and Southeast Asia and from discovery to delivery.
—ILRI’s Ben Hack reporting on #ipm2016

Eric Fèvre, on joint appointment at the University
of Liverpool and ILRI and leading an ‘Urban Zoo’ project,
says the next ‘super-bug’ is likely to emerge in an urban setting.
His interdisciplinary team will help determine effective
interventions to stop such emerging infectious diseases
transmitted among wildlife, livestock and people.
His team has just completed a study of 99 households
in Kenya’s capital of Nairobi, conducted to map the spread
of pathogens and prevent the next pandemic.
—ILRI’s Ben Hack reporting on #ipm2016

Watch a fascinating 2-minute video made by Steve Baragona of Voice of America about Fèvre’s Urban Zoo project being conducted in the slums and markets and wider environs of Nairobi, Kenya.

Bernard Bett’s downstream research and partnership
building has helped African governments to develop
more effective disease control policies.
A decision-support framework, for example,
is helping governments coordinate their responses to
outbreaks of Rift Valley fever. This project’s risk maps
and surveillance work help to refine target areas
for control efforts and the steps to take when an
outbreak has occurred or is likely to occur.
—ILRI’s Ben Hack reporting on #ipm2016

ILRI veterinary epidemiologist Bernard Bett described other exciting research that has made significant progress in better controlling Rift Valley fever, a mosquito-borne disease of both livestock and people, in East Africa, even though outbreaks of this ‘zoonotic’ disease occur rapidly but after long periods where no outbreaks occur, which presents two challenges: (1) disease control authorities have little lead time to prepare for an outbreak and (2) the capacity to respond to outbreaks of this disease diminishes greatly between outbreaks.