Most rural people in Zimbabwe depend on crop–livestock farming, growing cereals and legumes, and raising goats and cattle. In recent years, overdependence on rain-fed irrigation, poor soil fertility and a lack of access to inputs, particularly animal feed, have hindered productivity. In addition, falling yields, cash constraints and inefficient links between smallholders and consumers have contributed to food deficits, limiting livelihood opportunities and forcing much of the population to rely upon food aid. But with growing food demand, the adoption of crop and livestock technologies and more efficient markets offer opportunities to enhance agricultural production, food security and resilience in rural Zimbabwe.

In 2012, research by a host of national and international partners, including the International Livestock Research Institute (ILRI), identified opportunities to introduce crop and livestock technologies and improved practices along six target value chains in six rural districts in the Zimbabwean provinces of Mashonaland East, Matabeleland South and Matabeleland North. Appropriate cereal and legume crop-and- livestock technologies were introduced to farmers and on-farm research generated empirical evidence to support the adoption of promising technologies and practices, including nitrogen fixing crops and improved feeding practices. 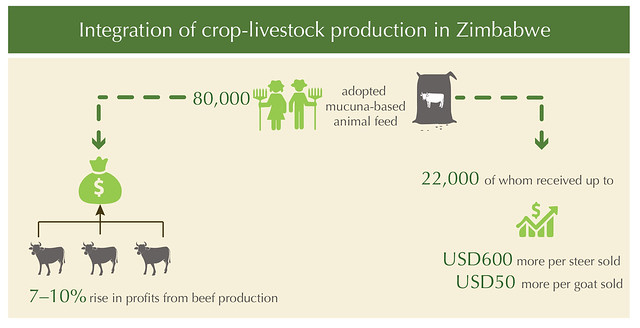 The formation of productive partnerships among private and public institutions—via the multi-stakeholder platforms— helped facilitate regular dialogue, knowledge sharing and capacity building. With support from agricultural extension personnel and project staff, multi-stakeholder platforms increased understanding among supply chain actors of market mechanisms. Participating farmers also organized themselves into cooperatives to buy inputs more cheaply in bulk and sell their livestock for greater profit. And scientists evaluated the outcomes and shared their findings through the platforms.

Five years on, more than 170,000 farmers have translated this increased knowledge and capacity into higher incomes. Enhanced soil fertility has improved grain and biomass yields, better feed and feeding practices have driven livestock productivity growth, and better links with markets have increased crop and livestock sales. The production of livestock feed—for household and commercial use—has improved through increased use of forage legumes (Lablab purpureus and Mucuna pruriens) and higher quality crop residues (e.g. stalks and leaves of groundnut). Giving livestock improved feeds on-farm rather than off-farm grazing, where they often fall prey to wild animals, has led to higher milk yields and fewer deaths. Among 80,000 participating farmers using Mucuna-based supplements, the net profits from beef production increased by 7–10%. In Nkayi district alone (Matabeleland North), steer and breeding goat prices received by nearly 22,000 farmers rose by up to 150% (from USD400– 1,000) and 250% (from USD20–70) respectively.

The solutions developed are now being taken up in neighbouring districts and beyond. In some districts, the technologies, approaches and experiences have been mainstreamed into cross-cutting government schemes, such as Zimbabwe’s command agriculture scheme, loan schemes, safety nets and nutrition programs. They have also been transferred to other research and development programs across the country and in the region, for instance, in the European Union-funded crop-livestock integration projects in Malawi.