Anyone who’s ever looked around the family dinner table at a celebration and wondered at how such a disparate group of people could be related to each other understands—whether they realize it or not—one of the primary difficulties of developing animal crossbreeding programs. No matter if it’s cows or people, individual traits such as height or personality are so varied that it can be difficult to perceive the underlying family resemblances. One way scientists overcome this challenge is by studying large sample sizes. Patterns that might not reveal themselves in a handful of instances become clearer when the lens zooms out to take in thousands of cases. Grandma’s longevity and good health are no guarantee that you won’t get hit by a bus on the way home. But thousands of data points about mortality can help scientists figure out how much of life expectancy is hereditary and how much is due to lifestyle—or to the plain luck of avoiding that bus. Similarly, a cow’s dairy productivity, disease resistance, durability and resilience to drought are all subject to individual variation; it’s only with large sample sizes that the effects of crossbreeding programs become clear. 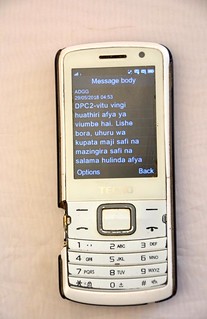 ADGG communicates with farmers via SMS messages like this one (photo credit: ILRI/David Aronson).

In the rich countries of the world, experimental breeding programs take advantage of vast ranching operations where a single farmer can sustain thousands of head of cattle. But developing effective systems to monitor and evaluate crossbreeding programs in Africa can be a challenge, for two reasons. First, most smallholder farmers own only a few animals, making it difficult to build up a statistically robust sample size. Second, the animals are often dispersed over wide areas and, in the case of pastoralists and agropastoralists, are mobile, making it difficult to effectively track and record the relevant information.

The International Livestock Research Institute (ILRI)-led African Dairy Genetic Gains (ADGG) project, a focused partnership on dairy cattle farmers in Tanzania and Ethiopia, is determined to overcome these challenges by taking advantage of the recent widespread adoption of mobile phones and by offering a valuable quid pro quo. Farmers who participate in the breeding programs and collect routine data on their cows’ health, growth and productivity receive personalized coaching and advice from livestock outreach specialists via routine visits and SMS messages on their phones.

‘The farmers learn how to better care for and manage their herd, and in return we gather the data that will help us improve dairy cattle genetics,’ says Amos Omore, ILRI’s country representative in Tanzania . ‘It’s data that can help us potentially transform the lives of millions of dairy families across Africa.’  The program is funded by the Bill & Melinda Gates Foundation and run in partnership with the Tanzanian Livestock Research Institute (TALIRI), the Public-Private-Partnership for Artificial Insemination Delivery (PAID) program, Green Dreams TECH Ltd, Land O’Lakes International Development and an array of other international and local organizations.

George Nditika stands beside the well. In the background is the feed bin he’s building in anticipation of growing his herd (photo credit: ILRI/David Aronson).

A recent visit to three dairy farms on the outskirts of Arusha, Tanzania, shows how the program is working for farmers. George Nditika is a professional dairyman who in the past decade has grown his herd from 6 to 80 head of cattle. His farm is a hive of barn and shed construction. Nothing goes to waste—even the manure run-off, which is channeled to a thin, deep well where it ferments, releasing methane gas that is captured and piped to fuel the farm stove. The stove heats the water he uses to wash his cows’ udders and keep them healthy. His best cows are a mix of Friesian, Jersey, Ayrshire and a local breed. They produce up to 20 liters of milk per day, most of which he sells to area restaurants and schools. Nditika’s assistants know to input ADGG data and follow carefully the advice they receive in return. When some of his young heifers failed to put on weight, the advice he received via SMS to change up their feed led to a rapid improvement. Nditika has ambitions of owning 200 cows within five years and hopes before long to buy a milking machine.

Violet Kimaro is a young mother and primary school teacher with three cows and two calves in her back lot. She keeps a few pigs in a separate pen. A dozen or more red-and-gold chickens peck freely about the premises. They not only provide eggs, she says, but eat the worms that might infest the cows’ hooves. A cornucopia of fruit trees surrounds the home—mango, banana, orange, guava and avocado. Kimaro’s cows are a primary source of nutrition for the family and a secondary source of income. They produce about 14 liters of milk each per day, which generates about USD100 per month in profit—a valuable supplement to her monthly salary of roughly USD150. Her goal is to eventually own five cows, each producing up to 16 liters per day. Meanwhile, Kimaro is especially grateful to the ADGG program for alerting her to the possibility that one of her cows might be developing mastitis, an inflammation of the udder whose symptoms aren’t always immediately evident.

Mevuko has only been keeping cows for three years. She has two and is hoping to buy a third soon. For now, her cows produce just 10–12 liters per day and nearly all of that is consumed by the family. She and her husband are worried about a small black snake—species unknown—whose bite she’s heard could be fatal to the cows. So with advice from the outreach specialist they’ve begun refurbishing their cow pen, raising it up a step to prevent snakes from slithering in.

On the day ILRI visited, ADGG beneficiary Rose Mevuko’s nephew was being initiated into manhood. Chairs were stacked in anticipation of the evening festivities and the ceremonial Maasai robes were laundered and hung out to dry (photo credit: ILRI/David Aronson).

The ADGG program is currently reaching more than 12,000 dairy farmers in Ethiopia and Tanzania and is providing  information and support services to 60,000 farmers altogether. The program hopes to reach as many as one million farmers in the next few years. But it’s not just farmers the program aims to reach. ADGG and PAID aim to creating financially sustainable artificial insemination (AI) services and helping them transition to local franchises of partner genetics companies. PAID is specifically determined to build up AI outreach and technician capacity to provide as many as 2.5 million AI services. Ultimately, the goal is to deepen the state of knowledge about which crossbred cows are best suited for the varied needs of farmers throughout the varied landscapes of East Africa.

For more on the ADGG program:

For a TED talk on the subject:
https://africadgg.wordpress.com/2018/02/09/livestock-genetics-program-works-with-farmers-to-boost-nutrition-in-africa/

One thought on “In Tanzania, a better cow is the way to a better future”