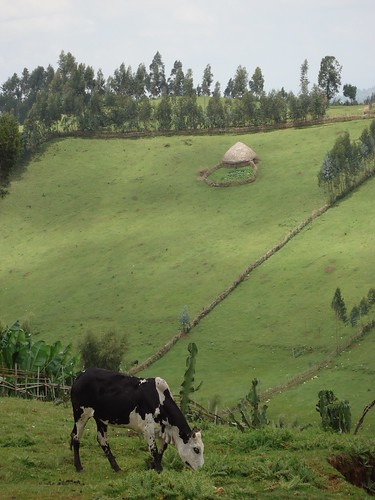 Though less common in the United States than in developing countries, ILRI has long viewed farms that mix crop growing with livestock keeping as essential to overcoming challenges to global food security; here is a typical mixed farming scene in Sidama, in the Southern Nations, Nationalities and People’s Region of Ethiopia (photo credit: ILRI/Kettema Yilma).

The new National Climate Assessment released recently by President Obama’s Global Change Research Program contains dour predictions about the impact of climate change on livestock production in the United States. The report warns that abrupt increases in temperature and more frequent encounters with extreme weather could cause ‘catastrophic deaths in domestic livestock and losses of productivity in surviving animals’.

How can the country’s livestock sector, which accounts for about half of the US$330 billion generated by US agribusiness each year, adapt to these changes? One strategy suggested in the report will be familiar to experts at the International Livestock Research Institute (ILRI). It involves raising livestock and crops together and taking advantage of the synergies between the two.

Actually, most food consumed around the world today comes from this type of farm. And ILRI experts have long argued that intensifying the so-called ‘mixed’ approach to food production holds the key to boosting food security in the developing world, particularly as climate change brings new challenges. The fact that it also is being considered as an adaptation strategy in the US illustrates how in American agriculture crops and livestock have largely have gone their separate ways.

In the US today, most livestock products come from large operations that focus exclusively on animals while most crops are raised on farms devoid of livestock. Now it appears the stresses of climate change may prompt efforts to bring them back together. And if US agriculture officials want to go back to the future and embrace the crop-livestock approach, they should consult researchers at ILRI and their colleagues within the CGIAR Research Program on Livestock and Fish. Much of their work over the last few years has focused on how to sustainably boost food production in the developing world by capitalizing on the connections between crops and livestock.

ILRI scientists believe intensifying food production on mixed farms could be a very efficient way to make use of limited resources. That’s because what’s being cultivated in the field can help support what’s being raised in the barnyard and vice-versa. For example, ILRI research has revealed that in the developing world, 70 per cent of the diet for cows, sheep, and goats comes from crop ‘residues’, the leaves and stalks leftover from harvested crops. Among the benefits of using crop residues as livestock feed is that it helps conserve water. The same water used to produce food from crops also helps produce food from animals. Separate livestock from crops and much more water is required to produce the same amount of food.

The challenge, say ILRI scientists, is figuring out how to leverage these complementary relationships so that food production can be ramped up in a sustainable fashion. For example, in Malawi, Mozambique and Zimbabwe, researchers are looking for the best varieties of ‘dual-purpose’ maize, that is, a crop that is superior both in its capacity to produce food for humans and to provide nutritious residues for animals. Typically, maize breeders have focused only on improving grain production and not on improving the quality or quantity of the leaves and stalks.

Researchers also are analyzing the trade-off between letting crop residues stay in the field to serve as mulch and help replenish soil health versus gathering them up for livestock feed. The benefits for each can vary from farm to farm depending on a number of factors, such as the quality of the soil and the availability of either fertilizers for crops or alternate feed sources for animals. But to realize the resource conservation potential of the crop-livestock mix, farmers need a way to determine the proper balance.

Other work has explored the fact that not all manure is created equally: how it is stored and applied can affect the nutrients it provides. There is also research probing ways to reduce livestock’s carbon footprint by improving feed quality. Sometimes what looks efficient from a resource perspective might not be the best thing from a climate perspective. Cows, sheep and goats may produce more greenhouse gases when their diet mainly consists of crop residues compared to other feed sources, such as grain or high quality pasture grasses.

The issues can become complicated, which is why it would be a welcome development for the US, with its vast network of agriculture researchers, to become more invested, literally and figuratively, in how to improve food production on farms that mix crops with livestock.

Matthew Davis is a Washington DC-based science writer and policy analyst; he also serves as a senior consulting writer for Burness Communications.

One thought on “Getting (the band) back together: US climate report sees reconnecting crops to livestock as smart adaption strategy”