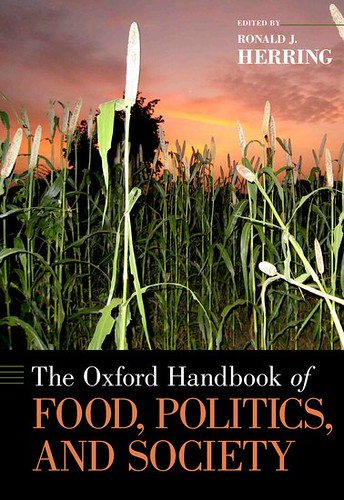 This January, Oxford University Press is publishing The Oxford Handbook of Food, Politics, and Society, a 904-page hardback volume addressing an issue that affects all of us: the intersection of food and politics. The handbook includes contributions from major scholars writing on food and politics today and representing diverse perspectives.

Edited by Ronald J Herring, professor of government and international professor of agriculture and rural development at Cornell University, the 35 handbook chapters confront four major themes in the politics of food: property, technology, justice and knowledge.

The first section of the handbook . . . examines technology, science and knowledge in food production. What is known—and disputed—about malnutrition, poverty and food security? The second section addresses ethics, rights and distributive justice: agrarian reform, gender inequality, entitlements and subsidies, and the social vision of the alternative food movement. The third section looks to intersections of agriculture and nature: wild foods, livestock, agro-ecological approaches to sustainability, and climate change and genetic engineering. The fourth section addresses food values and culture: political consumerism, labeling and certification, the science and cultural politics of food safety, values driving regulation of genetically modified foods and potential coexistence of GMOs, and organic and conventional crops. The fifth and final section looks at frontiers of global contentions: rival transnational advocacy networks, social movements for organic farming, the who and why of international land grabbing, junctures of cosmopolitan and local food narratives, the “supermarket revolution” and the international agrifood industry in low-income countries, and politics of knowledge in agricultural futures. . . .

Food has, for most of our species history, been intensely political: who gets to eat what, how often, and through what means? The scale of polity in question has shifted over time, from very local institutions dividing up grain piles to an international community imagined in the Millennium Development Goals of the United Nations. Simultaneously, the numbers and interests of people asserting political stakes in food and agriculture have likewise shifted up and out. Global networks advocate social justice in distal agrarian systems, promotion of some farming techniques and prohibition of others, food sovereignty or efficiencies of markets and trade. Political consumerism allows the well-endowed to “vote with their dollars” for changes in food systems far from home, but depends on certification and labeling from unseen institutions. As an object of governmentality, food has never been so prominent.

Livestock in the food debate
Among the 49 chapter authors of this new handbook are two members of staff at the International Livestock Research Institute (ILRI) who left the institute recently: Purvi Mehta-Bhatt, former head of ILRI’s programs in Asia and now serving as senior advisor and head of agricultural programs in South Asia for the Bill & Melinda Gates Foundation, and Pier Paulo Ficarelli, a knowledge management specialist formerly based with Mehta-Bhatt in ILRI’s New Delhi office and now an extension specialist with the International Rice Research Institute in The Philippines.

Mehta-Bhatt and Ficarelli’s chapter covers ‘livestock in the food debate’. With livestock contributing 40% of the global value of agricultural output and supporting the livelihoods and food security of some one billion people, especially those in developing countries, this chapter looks at the diverse livestock agriculture systems in industrial and less developed countries and their policy implications. Below are some excerpts from this chapter.

‘. . . Despite the importance of livestock to mixed farming strategies of smallholders and to pastoralists who are among the most vulnerable of the world’s poor, political conflict and policy indifference threaten this vital sector. Pressing questions posed by politicians, stirred by the public concerns on food safety and animal welfare in the last 10 years challenge the raising of animals for human use. More recently, climate scientists have demonstrated concern for livestock emissions as one of the major drivers of global warming. These political, ethical, and policy concerns are influencing and often limiting support to the global livestock sector by development agencies. The vocal concerns of the overfed are silencing the feebler voices of the undernourished. We seek in this chapter to explain the role of  livestock in supporting and supplementing agriculture in sustaining nutritional security and sustainable development, while explaining the basis for trenchant critiques in current politics. . . .

Popular food-systems thinker and writer Michael Pollan was asked what he would do if he could change just one thing about America’s industrial food production. “I’d put animals back onto America’s farms,” he answered. The age-old practice of raising farm animals and growing crops together, he said, generates so many benefits, and on so many levels, that this to him was the single most important missing piece in transforming America’s unhealthy and unsustainable industrialized food system into a healthy and sustainable (and less-industrialized) one (Pollan 2006). . . .

‘Livestock livelihoods, a mainstay of small-scale farming in poor and developing countries, have become highly politicized in recent years. One result is a notable lack of focus on coherent solutions to knotty dilemmas. With livestock foods offering high-quality nourishment and income opportunities for the poor, and with demand for livestock products skyrocketing in the developing world (levels of production are expected to double over the next 20 years, offering new pathways out of poverty for up to 1 billion people), and with livestock issues located at the intersection of much aid, development, environmental, and globalization issues in poor countries, one might expect high levels of funding, research, and development work on livestock-associated issues. That is not the case; livestock remain marginalized in terms of funding, research, and development work alike. . . .’

Access the book and its chapters from the Oxford University Press website: The Oxford Handbook of Food, Politics, and Society, 904 pages, Jan 2015.