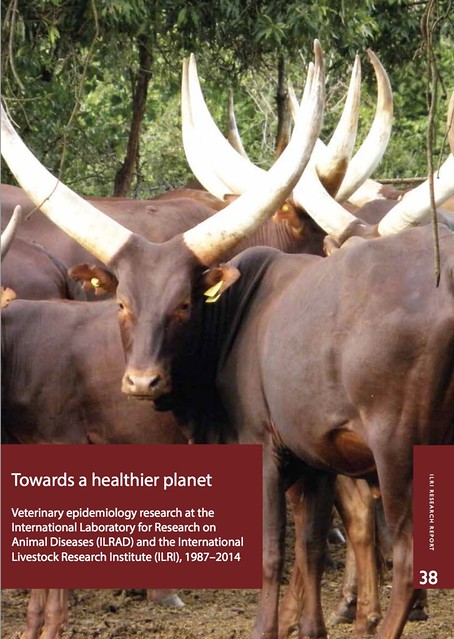 The International Livestock Research Institute (ILRI) marked its 40-year anniversary last year, 2014. One of the publications commissioned to celebrate that milestone is this new research report, Towards a Healthier Planet, written by Brian Perry, a distinguished former ILRI staff member who in 1987 initiated the Epidemiological and Socioeconomics Program at ILRI, or, to be precise, at ILRI’s predecessor, the International Laboratory for Research on Animal Diseases (ILRAD). Perry is now a visiting professor at the University of Oxford and honorary professor at the University of Edinburgh.

For almost thirty years, the International Laboratory for Research on Animal Diseases (ILRAD) then ILRI benefited from a strong research program in the epidemiological sciences. Over time, it progressively broadened its coverage in disease, disciplinary and geographic terms. The results of this work have now been assembled in this impact narrative, which carefully documents the wide range of issues addressed by the teams of researchers, and presents them in an illustrated and highly readable format.

For those starting out in epidemiology studies or careers, and for all those contemplating pursuing epidemiological and socioeconomic studies within a ‘hard’ biological sciences environment, this will be instructive reading. For the many ‘soft’ scientists who have given ILRAD, ILCA (the International Livestock Centre for Africa) and ILRI and its partners part or much of their professional lives over the years, it will provoke memories and, one hopes, smiles of recognition. ILRI today is indebted to you all.

The following excerpts are taken from the executive summary and introduction.

‘Veterinary epidemiology was introduced into ILRAD in 1987 to provide more substantive justification for the investments being made into fundamental research on vaccine development for the two African vector-borne diseases—theileriosis (East Coast fever, ECF) and trypanosomiasis—on which ILRAD focused. Under the Epidemiology and Socio-economics Program a small multidisciplinary team set up a series of institutional collaborations to undertake impact assessments of these two diseases in different regions of Africa. The term epidemiology was not completely new to ILRAD, but it had been used in the context of parasite strain variations, not in the context of understanding disease dynamics in different livestock production systems, and the impacts on people who derived their livelihoods from them. For the next seven years, until the merger of ILRAD and the International Livestock Centre for Africa (ILCA ) in 1995 and the establishment of ILRI, the program focused almost exclusively on the dynamics and impacts of tick and tsetse-borne pathogens of livestock in Africa.

‘In the new institutional environment following the merger, the geographic focus, disease focus, disciplinary makeup and range of tools used by the group broadened substantially, tackling multiple diseases in Africa, Asia and Latin America, and building capacity in epidemiological and economic impact assessment techniques. For a period of 15 years (1987–2002) ILRAD/ILRI’s epidemiology and socio-economic impact assessment capacity was assembled in one team based at what became known as the ‘Epicentre’, serving a range of institutional and externally commissioned needs; it became increasingly recognized internationally for its focus on animal health issues affecting economic development and poverty reduction. . . . [E]pidemiological capacity at ILRI over the last decade has become scattered throughout the institute and regions, the emphasis on quantitative epidemiology has decreased, and the focus has moved to new areas such as food safety, zoonoses and emerging diseases. . . .

‘ILRI and its predecessor ILRAD have played an important international role in exploiting epidemiological tools for the investigation and resolution of animal health constraints to livestock production and poverty reduction in many regions of the developing world. Furthermore, ILRI has been a leader in exploring new epidemiological approaches and in widening the disciplinary spectrum of epidemiological investigations. But arguably most important of all, ILRI has played a facilitating role in collaborating with countries, institutions and organizations in Africa, Asia and Latin America to respond to requests for both short-and long-term partnership and support at international, regional, national and local levels, and in extensive building capacity in epidemiological tools, techniques and approaches.’

The narrative that follows is decidedly lively, and at times honest to a fault. Here is how Perry describes the beginning of long struggles 1) to get his animal health laboratory colleagues (the ‘disease moleculars’) to understand and appreciate the quantitative and social sides of livestock disease in poor countries and 2) to get his hands on the datasets his team needed to start building a useful and credible body of work.

‘. . . While seen to be an important and long overdue investment by CGIAR donors and governors, the arrival of the new small team was viewed internally as rather inconsequential. It was labelled the ‘soft science’ group, the mandate and context of which was seen by many ILRAD bench scientists as irrelevant to the ‘real’ science being undertaken in the laboratories. The group rapidly laid out a plan for its work, which hinged upon establishing databases on the rapidly evolving livestock production systems in Africa at risk to the two diseases, and on methodologies for determining the impacts they were having. The donors were seeking numbers and monetary values, which needed data on where the diseases were, how much of them there was, and what effects they had on livestock and people.

‘This challenge rapidly opened up the realization that disease incidence and prevalence data in Africa were extremely scarce, and what little was available was often unreliable, let alone data on the denominators, such as the size, structure, composition and ownership of the populations at risk. And so the need for structured quantitative epidemiology capacity emerged, which led to a sustained program of data assembly, digital data documentation and synthesis, the development of modelling techniques, and of course the gathering of field data. . . .

‘Veterinary epidemiological and economic impact sciences at ILRAD and ILRI have left a valuable legacy of publications in peer-reviewed journals, strategic reports and policy documents, as well as methodologies and approaches which have been applied in virtually all corners of the world. The products of these sciences have also contributed to disease control policies and strategies in different ways, and a vast cadre of epidemiologists trained at ILRAD and ILRI is now serving different institutional needs in Africa, Asia, Australia, Europe and Latin America. . . .’

2 thoughts on “‘Soft’ science at ILRAD/ILRI: A lively look back at three decades of veterinary epidemiology for development”