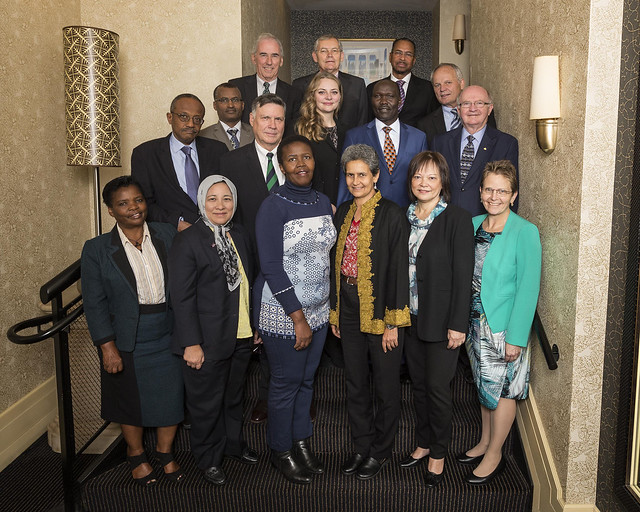 ILRI Board of Trustee members at the 44th meeting of the ILRI Board, Washington DC, USA

The 44th International Livestock Research Institute (ILRI) Board of Trustees meeting took place in Washington DC from 31 October to 4 November 2015. This latest meeting saw a number of changes on the ILRI board, as three members left, three joined, and Lindsay Falvey become board chair.

At this board meeting, Lindiwe Majele Sibanda and Dieter Schillinger stepped down after each serving for two three-year terms. Wondirad Mandefro Gebru—who was nominated to the board by the Ethiopian government, host country of the ILRI principal campus—also left after four years on the board. The board acknowledged the many contributions these outgoing members had brought to the board and to ILRI as a whole, and welcomed new members Chanda Nimbkar (India), Ethiopian-government nominee, Gebregziabher Gebreyohannes (Ethiopia), and Judith Lungu (Zambia).

The ILRI board members also met with colleagues from the World Bank Group to discuss opportunities for deepening collaboration on livestock sector issues at global, regional and local levels.

Having joined the board in April 2013, incoming board chair Lindsay Falvey had previously served as finance committee chair. He has years of experience working in the area of corporate governance, as an academic leader, and in undertaking international research. Falvey holds three doctorates from Queensland, Melbourne and Thaksin universities, and has published 15 books and more than 150 papers on livestock- and socio-cultural-related issues.

Lindiwe Majele Sibanda, CEO of the Food, Agriculture and Natural Resources Policy Analysis Network (FANRPAN), served as chair of the ILRI board’s human resources and nominations committees before becoming board chair in 2012. In his six years as a board member, Dieter Schillinger—an independent animal health consultant based in Germany—also served as chair of the board’s audit and risk committees. Outgoing board member Wondirad Mandefro Gebru—a specialist in applied genetics—is state minister for agriculture in Ethiopia.

Incoming ILRI board member Chanda Nimbkar has been director of the animal husbandry division of Nimbkar Agricultural Research Institute, in India, since 1998. Over the last 25 years, she has published more than 40 refereed articles in science journals and an equal number of non-refereed papers. She holds a PhD from the University of New England, Australia, specializing in genetic improvement of lamb production efficiency in Indian Deccani sheep.

Since September 2012, new ILRI board member Judith Lungu has been deputy vice chancellor of Mulungushi University, in Zambia. In addition to having served as a member of various national and international taskforces, boards and advisory groups, she has published more than 20 academic papers and books and worked as a consultant for many international organizations. She holds a PhD from the University of Manitoba, in Canada, specializing in reproductive physiology.

Appointed state minister for livestock and fisheries in 2013, incoming ILRI board member Gebregziabher Gebreyohannes has a long experience in the livestock sector, including at ILRI itself, where he completed his masters of science degree work and was a graduate fellow. HE Dr Gebreyohannes has more than 25 years of research experience and he served in the Oromia and Tigray agricultural research institutes in different research and administrative positions. His most recent position was director general of the Tigray Agricultural Research Institute. He holds a PhD in dairy animal breeding from Kasetsart University, Thailand.

Originally scheduled to take place in Addis Ababa, Ethiopia, this ILRI board meeting was moved to the US capital to facilitate the participation of Jimmy Smith, ILRI director general, Lindsay Falvey, ILRI board chair designate, and Rodney Cooke, ILRI board member and board chair of the International Potato Center, in a series of high-profile World Bank Group and CGIAR meetings.

ILRI board members were given briefings by the director general and the program, finance, human resource and the audit and risk committees conducted their formal meetings. In a separate retreat, board members examined ways of improving collaboration with national governments and with private-sector actors, strengthening the work of ILRI in Asia, and improving the nutrition outcomes of livestock-for-development programs. The ILRI board members also met with colleagues from the World Bank Group to discuss opportunities for deepening collaboration on livestock sector issues at global, regional and local levels.

Among other highlights, the ILRI Board of Trustees approved a provisional 2016 ILRI budget put forward by ILRI management. Falvey noted that ILRI’s management team was careful to propose a realistic budget that protects both ILRI’s current work and its long-term mission.