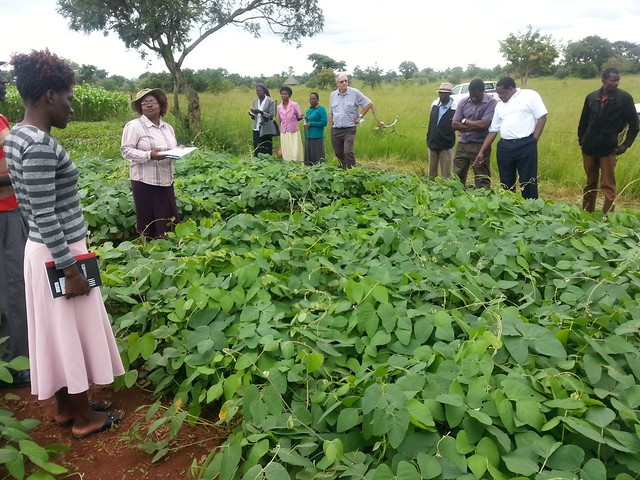 Farmers participating in the Zimbabwe Crop-Livestock Integration for Food Security (ZimCLIFS) project have increased their gross margins by up to 70%. The ongoing food security improvement project is targeting the country’s dairy farmers to help improve feed farming and overall dairy production.

Increased milk yield from providing better feeds at a lower cost is not only helping some farmers increase their incomes from dairy, but it is also allowing them to expand into other areas of farming. This sort of diversification reduces their exposure to external shocks.

One of the major challenges facing smallholder dairy farmers in Zimbabwe is the high cost of feed. In many cases, feed costs can account for up to 70% of dairy production costs, making dairy production unappealing or unprofitable for farmers. The ZimCLIFS project is working with farmers such as Theresa Gandazha, a smallholder dairy farmer in Goromonzi Ward 11 in Mashonaland East Province, to improve the production of their animals, as a result of feed interventions and training offered through the program.

Gandazha’s was one of nine households selected for dairy cow feed trials using lablab, cowpea and velvet bean-based diets compared with commercial diets. The farmers were also trained to grow forages, produce hay and to make home-based feeds through animal feeding demonstrations. Most of them keep cross-breeds of Holstein-Fresian, Guernsey and Red Dane cows.

Before joining the feed trial her first Red Dane cow produced about 12 litres of milk from 6kg of dairy meal fed each day. At the current cost of USD0.42/kg of dairy meal, she spent USD75.60 a month on feed. At USD0.42/litre of milk sold, her monthly gross margin was USD75.60.

‘Dairying was not profitable when I relied on the much more expensive commercial feed,’ she says.

Gandazha is delighted with the difference legume-based feeds have made for her milk production. ‘I have used the extra income to start a poultry project so that I can also sell broilers’ she says. ‘It’s no longer business as usual for me,’ she adds.

A widow, Gandazha, relies on farming to feed her six grandchildren who live with her on a three-hectare farm where she also grows groundnuts and cowpeas. She allocates 1 ha of her farm to maize, velvet bean and lablab for animal feed. Dairy is her main source of income. She also keeps 100 broiler chickens and runs a small tuck-shop on the farm. She has also expanded her dairy farming to 13 cattle including five Red Dane cows, which is boosting her dairy income.

ZimCLIFS has since been adopted by more than 35 farmers in Goromonzi Ward 11 following the successes of the households selected for the feed trials.