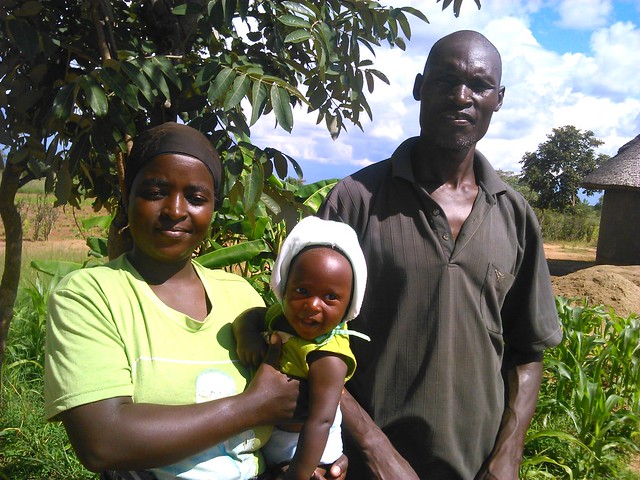 With the right training and support, food and nutrition insecurity can become a thing from the past. With training in conservation agriculture and fodder production practices, the Gore family have tripled their income in two years and are now able to pay for their children’s school fees. After buying goats, they now dream of getting their own cattle.

Many rural households in Zimbabwe rely on food aid to meet their nutritional needs. This problem, often aggravated by unemployment and falls in income, threatens the livelihoods of low income and food-insecure populations.

Forty-four year-old Garikai Gore had decided to leave his job as a truck driver in South Africa in 2010 and come home to Zimbabwe because he did not see future in that type of work. But the smallholder farmer from Chikwaka, Goromonzi District still struggled to make ends meet.

‘We never thought we’d ever own livestock, but with ZimCLIFS, we are dreaming of owning cattle’, she added.

At that time, Gore, his wife (Naome) and two children, survived on USD 175 a year from the sale of 400kg of soya bean. Their two hectare piece of land was not well utilised. They grew maize, soya beans, cowpeas and groundnuts, mainly for home consumption. They exchanged any surplus maize they had for household goods.

But an on-going project that is enhancing integration and intensification of the country’s smallholder crop-livestock systems has improved his family’s fortunes. The project is helping farmers like Gore to take advantage of market opportunities to increase their incomes.

As early volunteers in the Zimbabwe Crop-Livestock Integration for Food Security (ZimCLIFS) project in Chikwaka Communal Lands, Gore and Naome decided to grow forages, starting in December 2012, because they did not have any livestock. This was the first time they had taken part in a farming improvement and food security project.

At the end of the 2012-13 growing season (their first), they sold 50kg of forage seed to local farmers, mostly dairy farmers. They made USD 150 from these sales. In the following–2013-2014–season, they increased the area under forage cultivation to 0.7ha and realized over USD 600 from forage seed sales.

According to Gore, he is now able to pay his children’s school fees from the extra income and has also bought crop inputs to expand his forage business. The income from forage seed sales has also helped him to buy four goats to start livestock farming.

‘ZimCLIFS opened our eyes to the opportunities around us,’ says Naome, ‘and we now see that our forage farming is helping dairy farmers in this community.’

She says they will continue growing forages because incomes from their sales help them buy enough food and the forages provide feed for their goats and improves the soil on their farm.

‘We never thought we’d ever own livestock, but with ZimCLIFS, we are dreaming of owning cattle’, she added.

Funded by the Australian Centre for International Agricultural Research (ACIAR), the implementation of ZimCLIFS is led by ILRI, in collaboration with the International Crops Research Institute for the Semi-Arid Tropics (ICRISAT), CIMMYT, the Commonwealth Scientific and Industrial Research Organisation (CSIRO) Ecosystem Sciences, University of Queensland, Community Technology Development Organization, and Cluster Agricultural Development Services. It contributes to the CGIAR Research Program on Dryland Systems.

The project is now in its second phase after a first phase from June 2012-June 2015.