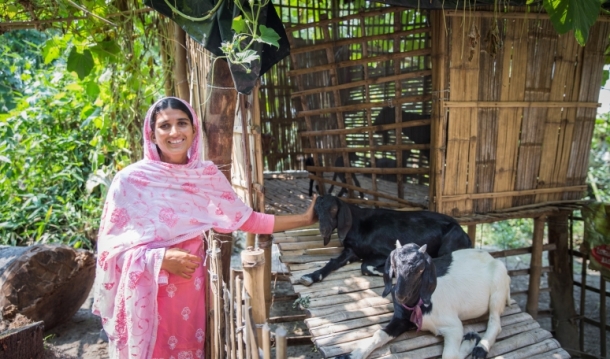 Shama Khatoon, outside her goat shed in Bihar, is a widow supporting her family through goat rearing (photo via Aga Khan Development Network/Mansi Midha).

The article is written by Steve Staal, leader of ILRI’s Policies, Institutions and Livelihoods program.

This is a banner year for the livestock sector in the state of Bihar, India. Here as elsewhere, the ubiquitous barnyard farming systems of the world’s developing regions have long been under-researched and under-developed. But the natural capital found in this state’s livestock value chains constitutes a ready foundation for accelerating broad-based development.

A group of local and international experts have done the math and found that the goat economy and dairy frontier in this emerging market are ripe for disruption.

They have run the analytical calculations, plotted the plausible scenarios, developed the business models, and created a comprehensive road map showing ways forward.

The ‘Bihar Livestock Master Plan’, launched earlier this year, describes public and private investments that can significantly grow and sustain and modernize the livestock sector in this state.

This effort was funded and supported by the South Asia Agriculture Program of the Bill & Melinda Gates Foundation.

A bold briefing book
Based on scientific evidence, the plan makes the case for increasing public and private investments in selected livestock commodity value chains—including cattle, buffalo, sheep and goat systems. The investment interventions recommended in the plan are based on comparisons of returns on investment from implementing new, or new combinations of, technology and policy interventions. The plan informs the development planning of Bihar’s Animal and Fisheries Resources Department and other Bihar government agencies working on livestock issues with development partners and donors, nongovernmental organizations, civil society organizations, private-sector actors and development banks.

This livestock master plan and an accompanying livestock sector analysis were prepared by a joint team of livestock and planning experts from Bihar and the International Livestock Research Institute (ILRI). The livestock sector analysis projections are based on an intensive data collection and modelling exercise and on consultations with Bihar experts. The analysis projects significant increases in livestock production, productivity and incomes from 2018/2019 to 2022/2023. A series of investment plans were developed for each main livestock species. These road maps will complement and help implement Bihar’s ‘Agriculture Road Map’ for 2017–2022.

Untethering rural enterprise
Bihar, located in eastern India, bordering Nepal, has a subtropical climate—hot summers and cold winters—and a vast stretch of fertile plain drained by the Ganges River, which flows west to east, dividing the state in half. The state is heavily dependent on agriculture, with nearly nine out of ten people (89%) living in rural areas (the highest proportion in India) and some 60% of the rural workforce engaged in agriculture. Even so, in 2012, agriculture contributed just 18% and the livestock subsector just 5% to Bihar’s gross state domestic product.

While Bihar’s economy has been growing rapidly since 2005 and poverty in the state declining, per capita income in Bihar, the third most populous state in India and the most densely populated, is fifth lowest of all Indian states. In 2012, more than one-third of the population (36%) was living below the poverty line.

Land of milk and goat
The high poverty rate in Bihar compared to similar Indian states has been attributed to low rates of ownership of cattle, buffalo, sheep and goats, with fewer households in Bihar owning ruminant stock than in comparable states. However, Bihar has a large goat population (ranked third in India) and women and people belonging to ‘marginal castes’ own most of the goats, making these animals a particularly potent target for poverty reduction programs. At the same time, Bihar has made good progress in developing its dairy sector and is widely recognized for its high milk production from cows, buffaloes and goats (ninth highest in India). The growth and performance of the dairy subsector in Bihar have outperformed those in many other states. That’s partly due to the Bihar State Milk Co-Operative Federation Ltd., which is supported by the government, which has played a key role in developing the dairy subsector and in raising dairy productivity, milk production and farmer incomes.

With the ongoing ‘Livestock Revolution’ at play here, as it is across India and the other developing regions of the world, where rising populations and household incomes are raising consumer demand for milk and meat, Bihar’s dairy and goat value chains have super salience for achieving the state’s rural development goals.

The newly launched Bihar Livestock Master Plan, together with the Bihar Agriculture Road Map, will guide investment in the further development and modernization of the state’s livestock sector.

Bihar Honorable Chief Minister Shri Nitish Kumar thanked ILRI and the Bill and Melinda Gates Foundation teams for their support in development of the livestock master plan, which, he said, was essential to the state achieving the targets set out in Bihar’s current Agriculture Road Map. He added that, by helping to grow the state’s livestock sector, the plan would also help promote organic farming and reduce widespread poverty.

Similar acknowledgements were made by the Animal and Fisheries Resources Department Secretary N Vijayalakshmi. She noted that the livestock sector analysis developed for Bihar portrayed great potential for the state’s livestock sector to help meet the government’s development goals as well as the UN Sustainable Developmental Goals. She noted her appreciation of the fact that the livestock master plan included specific ways to enhance the well-being of women, youth and small-scale farmers.

Shri Pashupati Kumar Paras acknowledged the livestock master plan for specifying the steps needed to advance dairying, goat-rearing, poultry and pig production and other allied sectors in the state. These, he said, would help improve food security and reduce poverty through better and more sustainable uses of livestock.

ILRI has previously worked closely with three governments in Africa—Ethiopia, Rwanda and Tanzania—to develop research-based national livestock master plans. These plans are already making a significant difference in the development of cross-bred dairying and red meat, pig and poultry production in those countries. The coherent, connected and collaborative approaches needed are requiring ‘ensemble government work’ enabling private as well as public enterprise. Now that the Bihar Livestock Master Plan has been launched, it, too, can serve as a practical road map for improving rural livelihoods and economic growth through a dynamic, broad-based and sustainable livestock sector.