Leaders of several CGIAR centres, including Jimmy Smith, director general of the International Livestock Research Institute (ILRI), are participating in the Africa Food Security Leadership Dialogue being held yesterday and today (5–6 Aug 2019) in Kigali, Rwanda. This dialogue has been organized by the African Development Bank (AfDB), the African Union Commission, the Food and Agriculture Organization of the United Nations (FAO), the International Fund for Agricultural Development (IFAD), the Republic of Rwanda and the World Bank.

Smith took part in a panel discussion this morning on how to ‘Leverage Science for Adapting African Agriculture to Climate Change’. Smith discussed some of the major research and development impacts that his CGIAR institute is making to mitigate the emissions from livestock, including a new methodology to determine the quantities of greenhouse gases emitted by African smallholder livestock systems.

This ILRI work informed a volume published this past May by the Intergovernmental Panel on Climate Change (IPCC) titled 2019 Refinement to the 2006 IPCC Guidelines for National Greenhouse Gas Inventories. Due to ILRI’s work, the IPCC for the first time was able to provide African countries with concrete guidelines for capturing their Tier 2 emissions (Tier 2 are nationally calculated emissions, as opposed to Tier 1, which are global guesstimates). This is bringing African countries one step closer to being able to identify, measure and monitor their nationally determined contributions.

How this came about
While African countries are committed to reducing their greenhouse gas emissions, they first have to identify and quantify those emissions, which is a challenge because the relevant data available are insufficient and even the mechanisms for collecting such data are lacking.

Knowing the importance of livestock raising to African food security and also that reducing greenhouse emissions from livestock will contribute significantly to slowing global warming, ILRI’s Mazingira (Environment) Centre set out about three years ago to develop a protocol to quantify greenhouse gas emissions from Africa’s ubiquitous smallholder livestock systems.

The protocol developed was successful. ILRI’s Mazingira’s scientists derived the first actual on-farm greenhouse gas emissions from smallholder livestock systems. Because ILRI’s methodology was designed specially for African livestock systems, the resulting data are enabling African countries to accurately report, for the first time, their ‘nationally determined contributions’ from livestock systems. ILRI is now handing this methodology over to African countries so that they can do similar work at a much larger scale.

This methodology will help Africa to reduce its livestock-based greenhouse gas emissions without compromising on its food production. These data are now informing ways of reducing emissions per unit of meat and milk produced while also improving the productivity of Africa’s livestock systems.

Africa will thus not only reduce its greenhouse gas emissions but also accelerate work towards ‘Zero Hunger’.

Find out more about the Mazingira Centre. 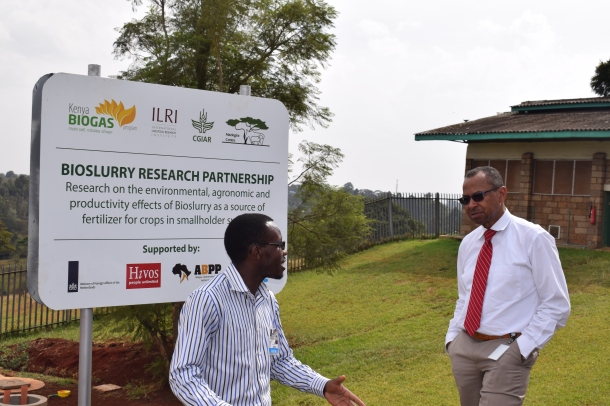 And if you’re interested in ways for African livestock keepers to batter adapt to the changing climate, check out the following new series of ILRI briefs:

One thought on “ILRI’s Jimmy Smith promotes ‘low-carbon’ and ‘climate-smart cows’ at the Africa Food Security Leadership Dialogue, in Rwanda”