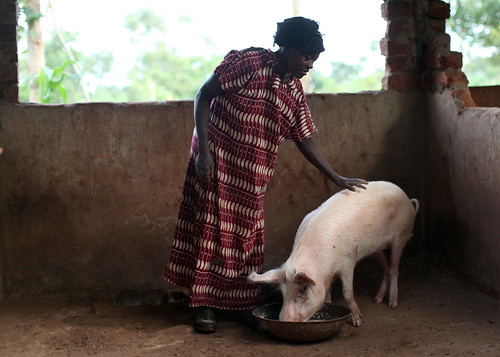 Partners in this project include veterinary officials from Uganda’s Ministry of Agriculture, Animal Industry and Fisheries (MAAIF), the National Agricultural Research Organization (NARO), the National Livestock Resources Research Institute (NaLIRRI), Makerere University, the local government and NGOs such as VEDCO.

Danilo Pezo, a senior ILRI scientist who manages ILRI’s Ugandan office and research programs, stresses the importance of pig keeping among the country’s poor farmers. While management of pigs is mostly in women’s hands, he explains, ‘if there’s a man in the household, he’ll most likely be the one controlling the economic decisions’. That’s because pigs are an important household asset that can be cashed in when needed. Giving just one example, Pezo says that pig keeping plays a central role in the payment of school fees in this country. ‘We see that one of the peak sales of pigs coincide with the time when school fees are due.’ The animals, he explains, are part of close-knit farming systems.

The pigs subsist largely on the remains of food crops—the stalks, leaves and other residues—after their grain has been harvested for human consumption as well as on kitchen waste; their manure is used to fertilize, and sustain, the crop soils.While pork joints can be spotted easily when driving through Uganda, as they are set up informally throughout rural and urban areas to satisfy people’s craving for meat, most pig butcheries are hidden away, located where they cannot be seen easily.

Without becoming more visible, and gaining greater attention by scientific researchers, government policymakers, non-governmental organizations and private-sector entrepreneurs, Uganda’s pig sector potential is unlikely to be fully exploited anytime soon. Much of the country’s overstretched extension services do not yet reach the country’s many small-scale farmers, therefore so little new knowledge has yet been generated in and for the country’s smallholder pig sector. However, researchers are beginning now to work with government officials and others to better understand just what interventions in pig production are feasible for poor farmers to take up, and what are not.

Greater knowledge about the large role pigs play in the rural commodity should help this land-locked East African country reduce its poverty levels. This knowledge should also help provide decision-makers with incentives for targeting poor pig farmers. Building networks of  researchers, government officials, the private sector (farmers, traders, butchers, input and service providers) and other stakeholders will be needed to effectively promote the development of the country’s smallholder pig sector.

While Danilo Pezo believes that a three-year-project will not be enough to create all this public awareness and new understanding, he thinks it should be sufficient time to demonstrate the relevance of livestock research for Uganda’s poor pig farmers and pork processors, sellers and consumers. ‘What we hope to accomplish’, he says, ‘is to test some research-based innovations and come up with some options that can be used over the long-term. Our aim is to help Uganda’s smallholder pig industry to grow, steadily and safely, bringing significant numbers of people out of poverty along with it.’

Watch a 3-minute film on ‘Smallholder pig farming in Uganda: A day in the life of a research-for-development project.’

Photo caption: Jane Sebbi, a Ugandan farmer, takes care of one of her pigs in 2011. Besides raising pigs, Jane grows maize, bananas and other crops to feed her husband and seven children (Photo on Flickr by Laura Elizabeth Pohl/Bread for the World).

Sections of this story were contributed by Elisabeth Kilian, a communications student on attachment to ILRI in 2013.

6 thoughts on “Ugandans and pork: A story that needs telling”