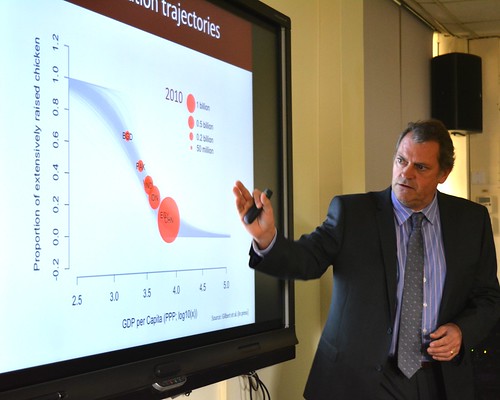 The second of two scientists to make a short presentation to Sir Mark Walport, the UK chief scientific adviser, on his 15 Jul 2015 visit to the International Livestock Research Institute (ILRI), in Nairobi, Kenya, was Tim Robinson, a livestock and spatial analysis expert. Robinson is a senior scientist in ILRI’s Livestock Systems and Environment program and ILRI’s focal point for the CGIAR Research Program on the Humidtropics.

Antimicrobial-resistant infections currently claim at least 50,000 lives each year across Europe and the USA alone, with many hundreds of thousands more dying in other areas of the world.

One of the major public health challenges this century, Robinson said, is the development in many important pathogenic organisms of resistance to antimicrobials. Beyond the abuse of antibiotics in medicine (i.e., when antibiotics are prescribed and taken indiscriminately), the burgeoning consumption of antimicrobials in intensive agricultural production, where the drugs are used to treat and prevent disease and to promote animal growth, is exacerbating this problem.

In the USA, 80% of antimicrobial sales are in the agricultural sector; China’s livestock industry by itself could soon be consuming almost one-third of the world’s available antibiotics.

A research paper by Robinson and others published earlier this year in the US Proceedings of the National Academy of Sciences conservatively estimated that from 2010 to 2030 global consumption of antimicrobials in livestock production will increase by 67% (from 63,151 to 105,596 tons per year) and nearly double in the ‘BRICS’ countries (Brazil, Russia, India, China and South Africa).

Furthermore, the results of a study commissioned by the UK’s Department for International Development (DFID) this year conducted by ILRI veterinary epidemiologist Delia Grace—as well as ILRI’s own observations in Ethiopia, India, Kenya, Uganda and Vietnam—suggest that these figures considerably under-estimate actual consumption in developing countries, which face the dual problem of lack of access to antimicrobials among smallholder farmers, who need the drugs to control their livestock diseases, and over-use in the intensive agricultural sector. To help address these problems, ILRI is collaborating with scientists at the UK universities of Edinburgh, Liverpool and Oxford and other international organizations to generate harder evidence to inform relevant policymakers and multi-stakeholder platforms. These collaborations are investigating the following: