Note: This is the second in a series of articles on
‘Curds and goats, lives and livelihoods—
A dozen stories from northern and eastern India‘.

By Jules Mateo,
of the International Livestock Research Institute (ILRI)

Shrestha, a spirited buffalo bull, greeted Jimmy Smith, director general of the International Livestock Research Institute (ILRI), with a low grunt during a visit Smith and his delegation recently made at the National Dairy Research Institute (NDRI), India’s pre-eminent dairy research centre, located in the northern city of Karnal and the prosperous state of Haryana.

Curious about his visitors and eager to play (or perhaps to attack, it was hard to tell), the six-year-old Shrestha did not stand still for a second in his holding pen. Jet black and weighing something like 550 kilos, Shrestha, which means ‘most excellent’ or ‘noble’ in Sanskrit, is no ordinary domesticated water buffalo. He is the world’s first cloned Murrah buffalo bull. 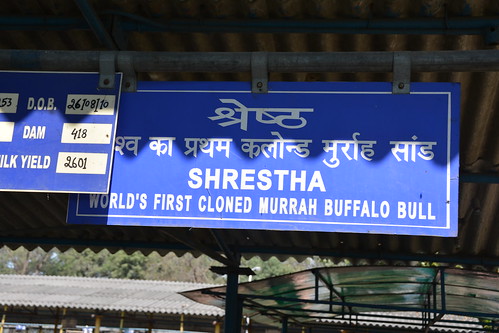 The Murrah is a breed of domestic water buffalo kept for dairy production. It originated from Punjab and Haryana states of India and has been used to improve the milk production of dairy buffalo in India and many other countries. Of the 13 buffalo breeds in India, the Murrah is the most sought after. Acknowledged as the best ‘breed-improver’, its gene pool now extends across the globe in South Asia, South America, Mexico and West Asia.

Researchers at NDRI, a major partner of ILRI’s, produced the world’s first cloned buffalo in 2009 using an ‘advanced hand-guided cloning technique’ and a donor cell from a foetus. In total, NDRI has produced more than a dozen cloned milch animals, including Swarupa, a female calf cloned from Karan-Kirti, the highest milk-producing Murrah buffalo at NDRI farm, and Apurva, a female calf cloned using somatic cells isolated from urine. Both female calves were born in 2015.

As previously reported in the Times of India, ‘NDRI director AK Srivastava hoped that the technology could go a long way in multiplying the number of best milch buffaloes in the country. “India has world’s largest population of buffaloes, which contribute about 55% of the total milk production in the country but even then there is an urgent need to enhance the population of elite buffaloes as their number is very small,” he said.’

According to AK Srivastava and MS Chauhan, a principal scientist at NDRI’s Animal Biotechnology Centre, the NDRI experimental and dairy processing units also take pride in related advanced research achievements, such as the expression of the human insulin gene in buffalo mammary epithelial cells for production of insulin to treat diabetes and the expression of the human lactoferrin gene in goats for production of human lactoferrin to treat diarrhea, intestinal ulcers and other digestive problems. 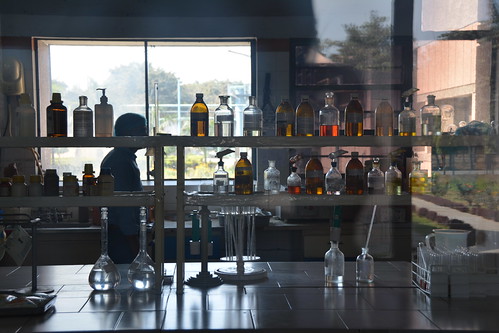 The dairy institute has many other practical achievements to boast of. It has, for example, developed a model that identifies heat stress in Murrah buffaloes and assesses how that stress affects the animal’s reproduction and it has been granted patents for an improved process for preparing milk cake and for a kit that detects detergent in milk. Here is a more complete list of the major achievements of NDRI’s Animal Biotechnology Centre alone.)

NDRI operates under the aegis of the Indian Council of Agricultural Research (ICAR), which is based in New Delhi. With more than 10,000 scientific and technical staff working at 101 ICAR institutes and 71 agricultural universities across the country, ICAR is one of the largest national agricultural systems in the world.

With animal breeding already selected as one of the joint focus areas, the collaborative cloning of another ‘noble’ animal might one day be in the cards.

Portrait of one of NDRI’s many well-kept animals (photo credit: ILRI/Susan MacMillan).