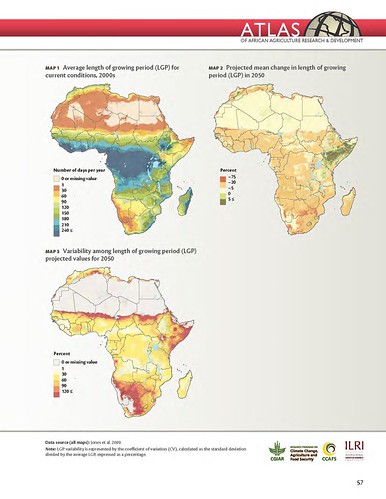 What are these maps telling us?
Projections show that climate changes between now and the 2050s may significantly affect the length of growing periods (LGP) in Africa. LGP, expressed as number of days per year, is a metric that integrates rainfall, temperature, and some soil conditions to determine when crops grow in certain areas (Map 1). It is a useful proxy for season type in the water-limited conditions that prevail in many parts of the tropics. LGP ignores intervening drought periods and so it is not always a good indicator of cropping success, but it is often highly correlated with yields.

Map 2 shows the projected percentage change in LGP in the 2050s compared with current conditions, using a scenario of high greenhouse gas emissions and several global climate models. Most of the continent will see reductions in LGP, some of them severe. Parts of eastern Africa, particularly the Horn of Africa, may see some increases, but in these areas, current LGP is low (90 days or less, Map 1).

Why is this important?
To effectively adapt to climate change, farmers, governments, and other stakeholders must understand the potential effects on crop and livestock production. A contracted growing season can impact crop and livestock productivity, particularly in areas where growing seasons are already short. Temperature increases and rainfall changes could push some of these areas to a point where cropping may fail in most years.

Some farmers may be able to adapt to shorter growing seasons by planting varieties that mature more quickly; other farmers may need to change to more drought- and heat-tolerant crops. Increase in LGP may present more growing opportunities, but it is uncertain how the change in growing time would impact soil moisture.

As climate changes, the distribution of crop pests and diseases may change, too. Of course, LGP is only one metric; the information shown here can be combined with or compared to other aspects of projected climate change—such as temperature changes—to create a more detailed picture of how climatic shifts could affect crop growth and development.

One thought on “New map: Impacts of climate change on length of growing periods in Africa”