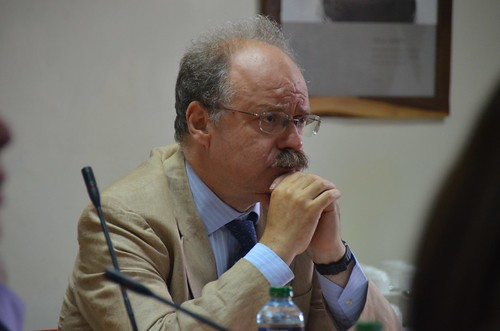 In the area of animal health, this ILRI-UK engagement stretches back to the Britain’s support of early-phase basic research on African sleeping sickness, a wasting disease of ruminants, and East Coast fever, a commonly fatal disease of cattle that is similar to malaria and cancer. While vaccine-mediated control of sleeping sickness remains a global challenge, an improved live-parasite-based vaccine made by ILRI is being used to control East Coast fever. ILRI is helping the UK-based Global Alliance for Livestock Veterinary Medicines (GALVmed) to commercialize this product, which was initially developed over 40 years ago at the East African Veterinary Research Organization, the predecessor of the Kenya Agricultural Research Institute (now called the Kenya Agriculture and Livestock Research Organization [KALRO]), which also holds the distinction of being the institute that developed a tissue-culture vaccine that led to eradication of rinderpest. 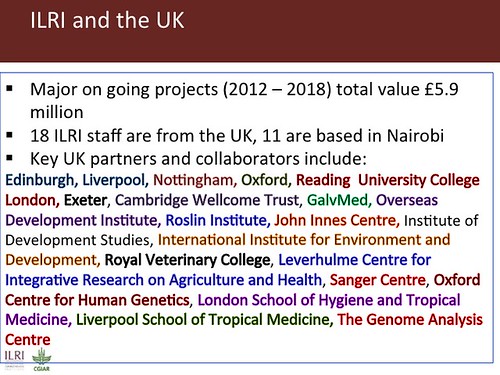 More recently, a multi-institutional research consortium led by ILRI and funded by the Bill & Melinda Gates Foundation (BMGF), the Department for International Development (DFID) and the United States Agency for International Development (USAID)/United States Department of Agriculture–Agricultural Research Service (USDA-ARS) has begun working on development of a subunit vaccine to protect Africa’s cattle against East Coast fever. This consortium includes key collaborators from the University of Edinburgh and Oxford and the Royal Veterinary College.

ILRI’s vaccine platform, called ILVAC, also conducts research on other important livestock diseases, such as African swine fever, contagious bovine/caprine pleuropneumonia, peste des petits ruminants and Rift Valley fever. Because these diseases are already endemic in Kenya, ILRI’s animal health research can be carried out in Kenya under bio-containment regulations less stringent than those in the UK. ILRI’s enhanced Biosafety-Level 2 animal facilities have been used to support prototype vaccine trials for peste des petits ruminants and Rift Valley fever in collaboration with scientists at the UK’s Pirbright and Jenner institutes, respectively. 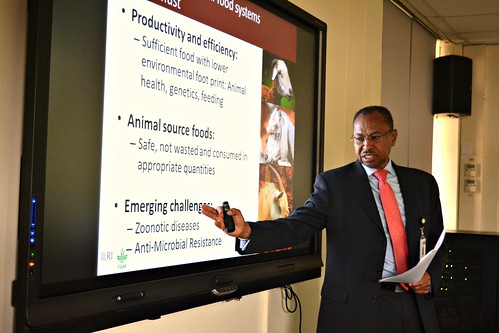 Smith explained that ILRI is one of 15 international agriculture research centres of the CGIAR Consortium and the only centre dedicated entirely to animal agriculture research for the developing world. In addition to its Nairobi headquarters, ILRI has a principal campus in Addis Ababa and regional or country offices offices in 20 other locations in Africa; South, Southeast and East Asia; and Latin America.

‘Drawn from 40 nationalities, ILRI has a work force of about 750 staff globally and operates on an annual budget of almost USD90 million. The institute works through extensive partnership arrangements with research and development institutions in both the developed and developing world.

ILRI’s research-for-development work ranges from laboratory-based biosciences (animal health, genetics and feeds) to field-based integrated sciences in the areas of animal productivity, food safety and zoonotic diseases (transmitted from animals to people), livestock and the environment, gender and livelihoods, and policy and markets. Capacity development is an important part of the institute’s mandate and cuts across all its research and development areas.

‘With the Africa Union/New Partnerships for Africa’s Development (AU/NEPAD), ILRI co-founded the Biosciences eastern and central Africa-ILRI Hub (BecA-ILRI Hub) on its Nairobi campus where world-class facilities for biotechnology research are in use by ILRI, other international as well as national research centres and partners. The platform increases access to world-class laboratories for African and international scientists conducting research on African agricultural challenges.