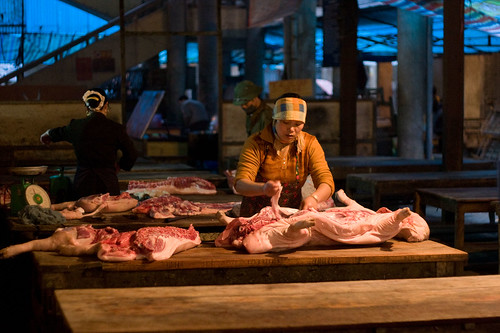 At the Sunday market in Sapa, northern Vietnam, women butcher hogs slaughtered outside of town but still steaming when they start working on them at the market (image via Flickr/Kurt Johnson).

From ‘Background’
‘Food-borne diseases and food poisonings are attracting a lot of attention in Vietnam due to repeated episodes of adulterated and unsafe food practices receiving widespread media attention. . . .

‘The Vietnamese media gives a lot of attention to food safety issues when famous people pass away at a young age from cancers, asking whether there is something wrong with our food. The countries’ top leaders, too, have discussed food safety issues at meetings of the national assembly. . . .

‘In this paper, we wish to present a perspective on food safety in Vietnam in the context of an international research institution working on food safety with partners in Vietnam and internationally. As we work more with animal-sourced food, we place more focus on these and discuss vegetables only to some extent.’

From ‘Main text’
Ethics: profiting despite of adverse health outcomes for consumers
‘The health of the public is put at risk when stakeholders along the food chain do not follow good practices of producing, processing, conserving, transporting and selling food. This leads to contamination of animal feeds by banned chemicals, sale of spoiled foods, using chemicals to make fake beef from lean pork meat etc., and other unethical behaviours.

Farmers are reported to produce safe or safer foods for their own consumption, while selling unsafe foods to the public.

There is little trust among stakeholders, but this is not the fault of individual farmers and traders.

‘This high prevalence of poor practices was also very common in Europe and America during times of rapid development, and it is a problem that can be overcome.

‘A common response to the concerns over food safety is an attempt to strengthen regulations, and ramp up inspections and punishments. This has also been seen in Vietnam. . . .

‘Yet, the experiences of developed countries, which now have relatively safe food, is that command-and-control approaches to food safety, which rely mainly on inspection and punishment, are less effective than approaches in which stakeholders are empowered and encouraged to self-regulate, motivated by the realisation that this is more profitable in the long term.

‘With these approaches, the emphasis moves away from testing the safety of end products to assuring that the process of food production remains within safe limits at all times.’

From ‘Issues of risk communication’
‘To communicate risk effectively, it is important to understand the psychology of risk perception. People encounter information from different sources about chemicals detected in food. Consumers normally do not think about risk in the same way that risk assessors understand risk. People filter information through a variety of lenses that affect their perceptions of the risks and what they can actually do to minimise them. For example, as mentioned earlier, biological hazards in some foods may cause more sickness and death than chemical hazards, but consumers are usually more worried about chemical hazards. . . .

The marked difference in how experts and the public view food safety risks has real consequences: opportunities are lost and scarce resources are spent managing minor problems, while the major issues go to the back of the queue. . . .

Governmental officials often see modernising retail as the way forward for improving food safety. However, this is challenged by high costs, consumer preference for warm fresh meat, resistance from retailers, as well as the inability to show improvements in safety.

From ‘Food safety solutions’
‘. . . The International Livestock Research Institute (ILRI, https://www.ilri.org) has been developing market-based approaches to improving food safety in informal markets. This was first developed for the informal milk sector in Kenya and has been subsequently extended to the dairy sector in Assam in India and Tanzania, and meat retail in a large Nigerian metropolis [25]. The central idea is light-touch interventions that are sustainable and scalable, changing practice through capacity building for food safety actors such as farmers, slaughtering workers, butchers and incentives, and providing an enabling policy environment. The approach has been positively reviewed by the Institute of Development Studies as an example of making markets work for the poor. . . .’

From ‘Conclusions’
‘. . . Regulations are important, but regulations alone will never compel everyone to respect food safety. Nor can a food system transform overnight, and there are many aspects of smallholder production and traditional retail that are beneficial to Vietnam’s current stage of development. As such, improving current systems is advised, while also allowing development and modernisation. . . .’

From ‘Acknowledgments’
‘This paper is part of food safety projects PigRISK funded by the ACIAR . . .  and the Taskforce for Food Safety Risk Assessment in Vietnam. The authors acknowledge funding from the CGIAR Research Program on A4NH and the IDRC through the FBLI in SEA.’