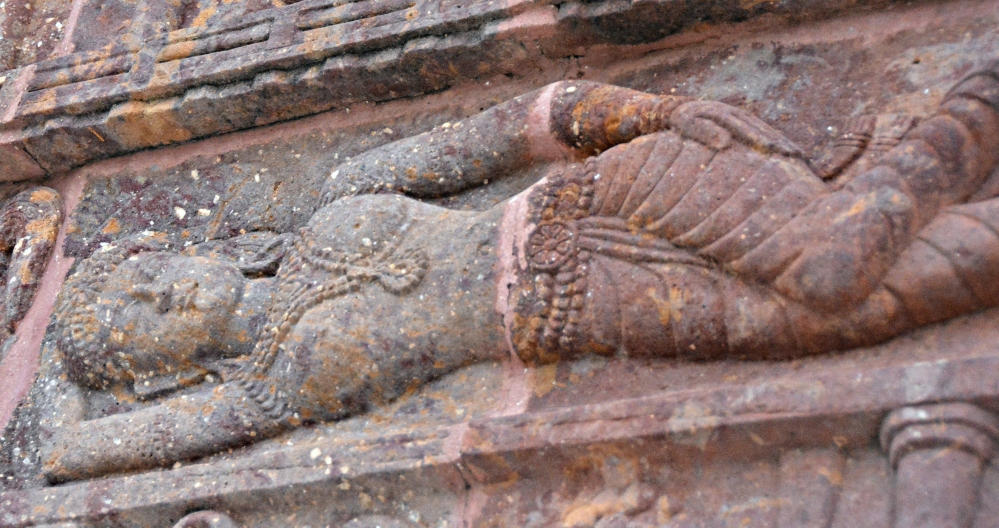 Temple carving in Bhubaneswar (this and all photos on this page by ILRI/Susan MacMillan).

Note: This is the fifth in a series of articles on
‘Curds and goats, lives and livelihoods—
A dozen stories from northern and eastern India’.

PART 5: The ‘Wonder Women’ of Bhubaneswar

By Susan MacMillan, of the International Livestock Research Institute (ILRI)

8 Mar 2016: 5:30 am
My communications colleague at the International Livestock Research Institute (ILRI) Jules Mateo and I are in the lobby of our hotel in New Delhi checking out. I’m groggy, having been up all night catching up on emails and finalizing a blog article to celebrate ‘women in livestock development’ (aka, WILD) on this day, which happens to be International Women’s Day. I’m a few minutes late getting down to the lobby to check out.

A taxi waits to take us to the airport for our early morning flight to Bhubaneswar, capital of India’s eastern state of Odisha (formerly, and still commonly, known as ‘Orissa’). On arriving at the Delhi airport and quickly entering, we find we’re in time for our flight but I’m still relieved when two women from Air Vistara, the newish domestic airline we’re using, approach us to ask us to move a new queue. I assume our check-in is being expedited.

But no, that’s not what’s happening. What’s happening is that we’re both being bumped up to business class. It turns out that Air Vistara (‘vistaar’ means ‘limitless expanse’ in Sanskrit) is making a big effort to celebrate International Women’s Day, and Jules and I have just been selected to receive some special treatment. This felicitous pre-dawn airport incident will turn out to be just the first of many day-long occasions marking this special day in India.

Memento of the upgrade!

On receipt of our new business class tickets and boarding cards (stapled with festive yellow ribbons), we’re each handed a little bouquet of flowers. The airline women ask if we’d mind having our pictures taken with them (of course not!) and then we make our way, giddy with excitement about our unwarranted upgrade, to the gate. The whole airport appears to be conspiring in this celebration: the woman who pats us down at the security check, for instance, wishes us a ‘Happy International Women’s Day’, as do several others.

Boarding our plane, we’re directed to our comfy business class seats and offered a selection of the day’s morning papers and a freshly squeezed juice before take off. The stewardesses give us every possible attention on our (now too short) flight. (I spend most of the 1.5 hours catching up on my sleep and am sad to miss the elaborate Indian breakfast.)

As we land, our ever-attentive stewardesses ask if we’d mind staying behind as everyone else gets off the plane so that another series of pictures can be taken. This time the pilot comes back to join us in the selfies and other mobile snaps—and it turns out the pilot is another Indian woman. In fact, everyone handling this flight appears to be a woman, reminding me of the news splash the previous Nov about an all-female crew on an Ethiopian Air flight from Addis Ababa to Bangkok, with—the media reported breathlessly—‘the daughters of Lucy’ fully operating the journey, from ground to sky, on the eve of that airline’s 70th anniversary.

A delicate fact that I have as yet omitted to mention is that Jules and I are travelling with three of our superiors, our director general Jimmy Smith and his wife Charmaine as well as ILRI’s representative for South Asia, Alok Jha. Our embarrassment about travelling business as they sit back in coach, and about getting so much attention from everyone all morning, becomes a joke as Braja Swain, an ILRI scientist and project leader in this state, packs us all into a vehicle to take us to the Bhubaneswar hotel where Jules and I will be staying that night.

As the joke continues on our way from the airport, we pass billboard signs promoting International Women’s Day (the whole country has been infected!). This reminds Jha that he once spent a few months working for an institute in Bhubaneswar that solely serves women farmers, the only such institute in all of Asia, he says.

8:30 am
Alok Jha gets out his cell phone and puts a call in to a colleague he still knows there, suggesting that as our ILRI delegation is in town for the day, we could pay a visit to the institute that afternoon, at their convenience. Jha’s call is transferred to the head of this institute, who immediately extends us a warm invitation for us to visit her after lunch.

Scenes of our series of morning courtesy calls on government and university VIPs in Bhubaneswar.

10:00 am
Which is what—following a morning spent making courtesy calls on various senior government officials and university professors to discuss livestock research collaborations—we do.

Memento of some of the VIPs the ILRI delegation visited in Bhubaneswar.

2:00 pm
The Central Institute for Women in Agriculture belongs to the vast network that makes up the Indian Council for Agricultural Research. As we enter the large building housing the institute, we’re immediately shown to the director’s office. Jatinder Kishtwaria is waiting for us and serves us chai and an assortment of India’s milk-based sweets. We introduce ourselves and enquire about her institute’s programs, which, she explains, she herself is just getting to know as she took up her position just 20 days previously. After 20 minutes or so, we thank her and begin to make polite noises about taking our leave.

As our host walks us out her door, we catch something she says about a ‘program’. We dutifully follow her down a hallway and enter a large conference room filled with people seated, where, it quickly transpires, the senior members of our little delegation have been made honoured guests at an event about to start. The Smiths and Alok Jha are handed bouquets of flowers and shown to their seats on the raised dais at the front, along with the other speakers on what, we now understand, is a whole afternoon’s program marking International Women’s Day. 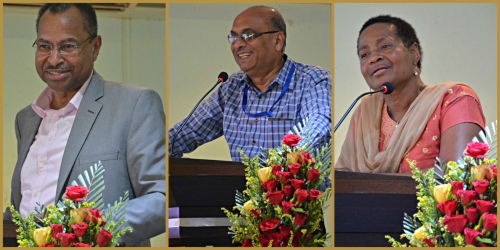 Jimmy Smith, Alok Jha and Charmaine Smith all made impromptu speeches at an event held on 8 Mar 2016 celebrating International Women’s Day at the Central Institute for Women in Agriculture, in Bhubaneswar, Odisha, India.

The afternoon’s proceedings could not have been more delightful, nor we more delighted to be taking part. Jimmy Smith, Alok Jha and Charmaine Smith each gave a little impromptu speech (Jha noting that ‘Every day should be International Women’s Day!’). One of the women who spoke received an award for her agricultural entrepreneurship. Several staff of the institute recounted the history of women in Indian agriculture, what the institute had achieved in working for them, and how far the world had advanced in helping agricultural women advance. And how much remained to be done.

At the close of the program, we leave the conference room to take chai, consumed with a box of milk sweets, while chatting with the other guests and taking in several special exhibits and poster displays. 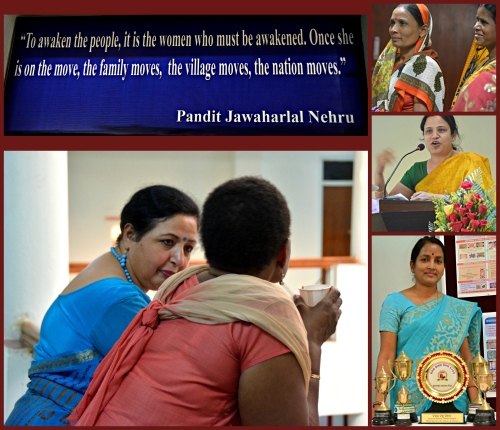 (Top) Nehru quote hung above an office door at CIWA; (bottom left) Jatinder Kishtwariathe, director of CIWA, reflects on the day with ILRI’s Charmaine Smith; (top right) two of the many women guests at the event; (centre right), the CIWA staff member who was master of ceremonies at the event; (bottom right) the woman bestowed an award for her agricultural entrepreneurship .

Among the exhibits set up were several tables displaying small replicas of agricultural implements designed to reduce the labour or danger of farm work traditionally done by women in India. While inspiring to see that such improvements are being made, and that the prices of the tools are subsidized by the government to make them more affordable by poor women, it also broke the heart a bit to see how rudimentary are the advances and how heavy remains the menial load and drudgery work of India’s hundreds of millions of farm women. 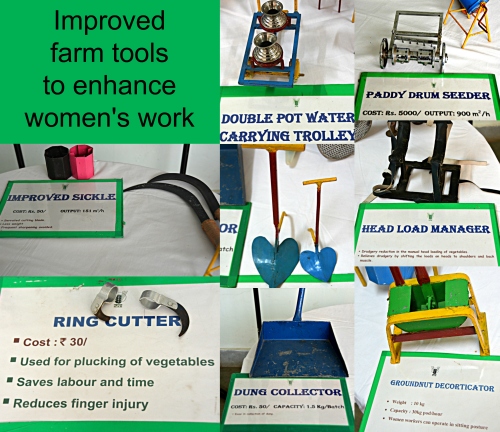 As Nehru so rightly indicated, it is the women of India who, once on the move, will get the nation moving. Certainly, we met some of these ‘Wonder Women’ of Bhubaneswar on this auspicious day.

With many thanks to Jatinder Kishtwaria and her colleagues at ICAR’s Central Institute for Women in Agriculture for the great work they are doing and for their inspiring afternoon’s event.

Part 3: Culture of the cow: Curds in the city—Better living through smallholder dairying in northern India, 5 Apr 2016.

View all photos of the ILRI delegation in Bhubaneswar: ILRI Flickr album.

One thought on “‘Wonder Women’ of Bhubaneswar”