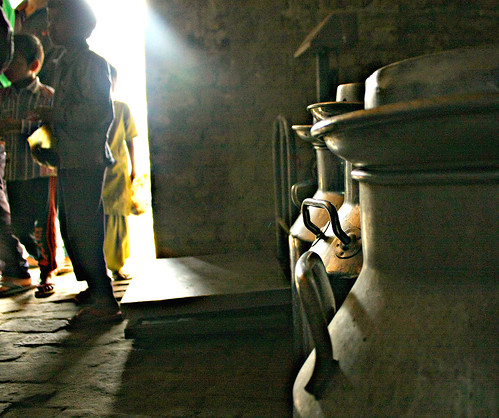 Milk cans and children stand in the doorway of a dairy cooperative outside Karnal, Haryana, India (photo credit: ILRI/Jules Mateo).

Note: This is the fourth in a series of articles on
‘Curds and goats, lives and livelihoods—
A dozen stories from northern and eastern India’.

On our way to visit a village on the outskirts of Karnal, in Haryana, India, we passed several sights that told their own story. A kind of pious family food production, it appeared, constituted the very fabric of this place. 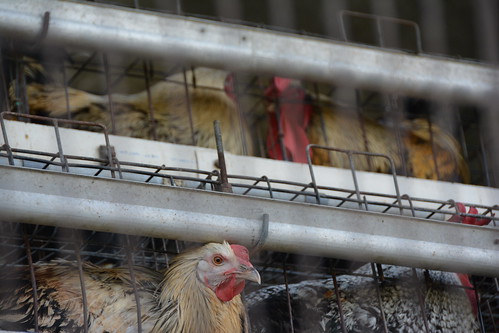 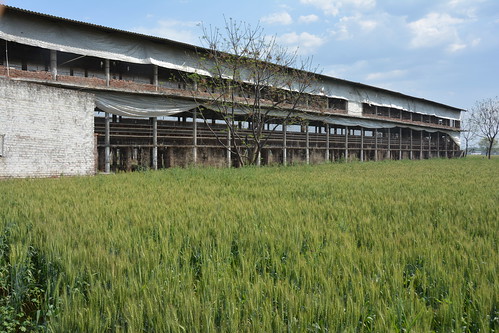 First we passed a large poultry unit, not surprising in this state, which is known as the ‘poultry capital of India’.

This unit was raising 2,400 Kuroiler chickens (2000 females and 400 males), a popular hybrid dual-purpose meat and eggs breed developed in India in the 1990s. Compared to India’s native chickens, these multi-coloured birds, which live on a diet of kitchen and agricultural waste, grow bigger (3.5kg vs 1kg for males and 2.5kg vs 0.9kg for females) and lay more eggs (150 versus 40 per year). Kuroiler eggs fetch 20 Indian rupees versus just 5 rupees for eggs of unimproved native breeds. 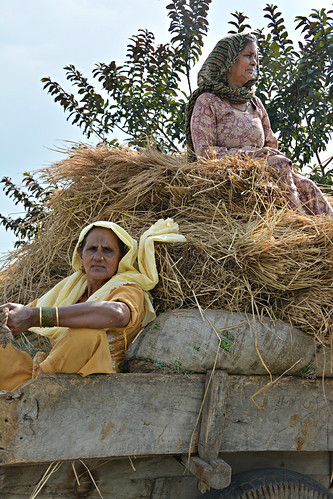 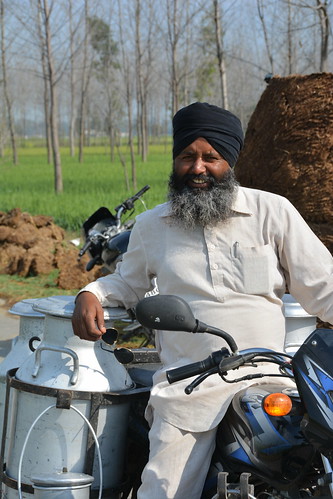 Then we passed a family transporting rice straw and green fodder by bullock cart from their farm plot to their house in the village, one kilometre away, where they keep their dairy animals. This family told us that the three-year-old bullock pulling the cart cost them 5,000 rupees (about 75 US dollars). Coming in the other direction was a man on a motorcycle transporting morning milk he had collected from several farms and was taking to the local village collection point. All of them kindly stopped so that we could take their pictures. 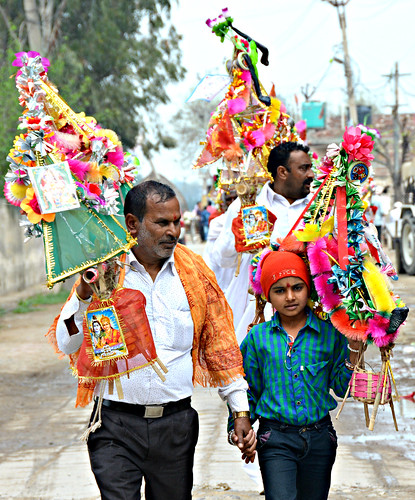 Finally, we passed several colourful processions of groups walking along the road carrying elaborately decorated floats on their way to a Lord Shiva festival.

The Mahashivaratri Festival (‘The Night of Shiva’) falls on the moonless 14th night of the Hindu month of Phalgun (Feb or Mar in the English calendar), marking, one legend goes, the wedding day of Lord Shiva and Parvati, when Lord Shiva performed the ‘Tandava’, the dance of primal creation, preservation and destruction.

Devotees observe a strict 24-hour fast, wake early to take a ritual bath in the Ganga or other source of holy water and put on fresh new clothes. Then they walk in groups to the nearest Shiva temple carrying pots of the holy water with which to bathe the Shiva ‘lingam’ every three hours along with the five sacred offerings of a cow, called the ‘panchagavya’—milk, sour milk, urine, butter and dung. The five foods of immortality—milk, ghee, curd, honey and sugar—are placed before the lingam along with flowers and incense. Amidst chanting and ringing of temple bells, large numbers will keep a sleepless vigil throughout the night, telling stories, meditating and singing hymns in praise of Lord Shiva. On the following morning, they will break their fast by partaking of prasad offered to the deity.

Those who fast on this night and offer prayers to Lord Shiva, it’s believed, bring good luck into their lives.

About a half an hour’s drive from the National Dairy Research Institute, we arrive at the village of Nagla Roran. With its immaculately clean, paved streets, tidy homes, electricity and other infrastructure, including farm machinery strewn casually about the place, it more resembles a farm town than farm village. 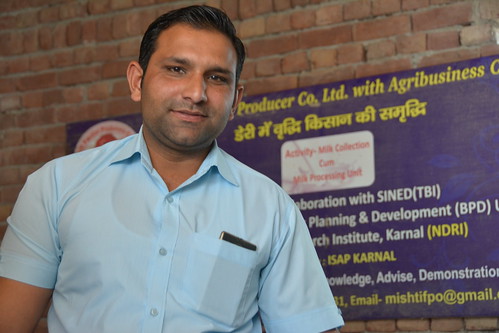 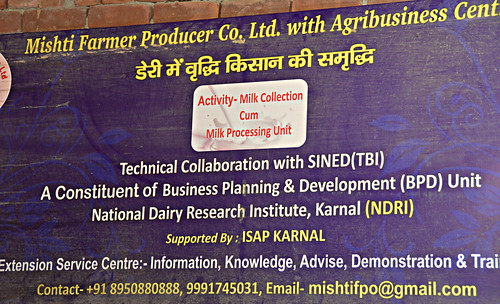 Sanjiv (above) and his signboard in his dairy agribusiness centre office in Nagla Roran (ILRI/Susan MacMillan).

We first visit the office of an enterprising youngish man called Sanjiv, who runs a cooperative providing improved forage seed and cattle feed to 230 village dairy producers. Rice, maize, wheat, barley, gram, mustard, cotton and sugarcane are some of the major crops cultivated here, alongside the raising of dairy and other animals. 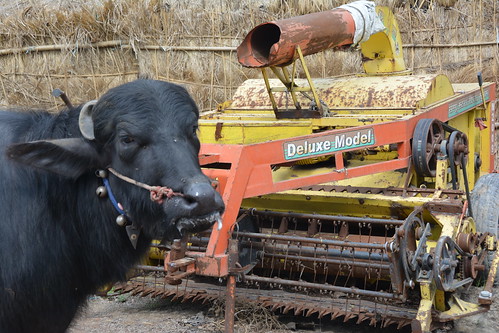 Sanjiv represents the third generation of his family to run a dairy business and provide agribusiness services. Dairy enterprises, he says, are great ‘value-added’ opportunities for small-scale farmers and are helping to close the gap between urban and rural livelihoods. 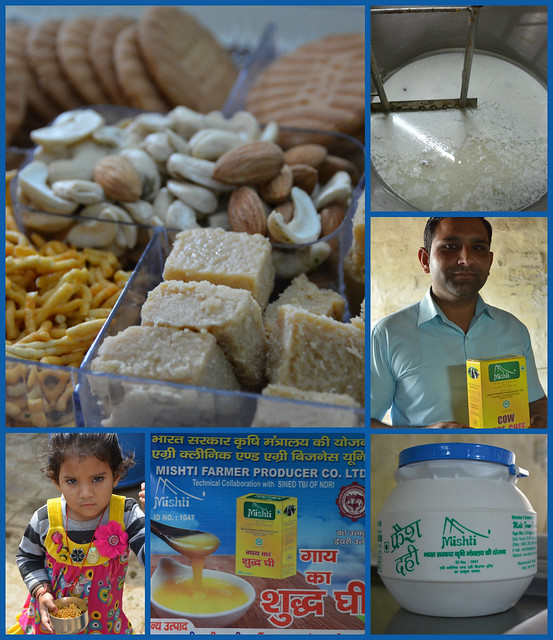 Sanjiv, his daughter Mishti, and the Mishti products his dairy enterprise is producing (ILRI/Susan MacMillan). 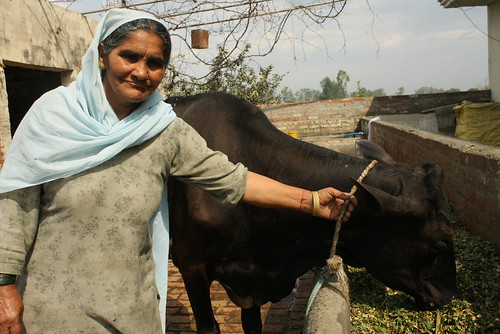 Next Sanjiv takes us to his home in the village, where his mother keeps her dairy animals.

Dairy businesses have raised living standards in the village, Sanjiv says. (All the adults now have cell phones, he points out, and most households have more than one television set.) 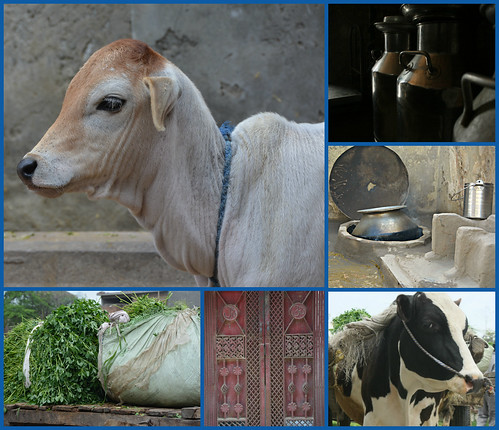 Three years ago, at the birth of his daughter Mishti, Sanjiv considered starting a non-dairy business but his mother refused to stop keeping her herd of milk cows and buffaloes, and so he undertook training at the Business Planning & Development Unit of the National Dairy Research Institute (NDRI), in nearby Karnal, and began building up businesses that add value to the milk his mother’s cows produce. 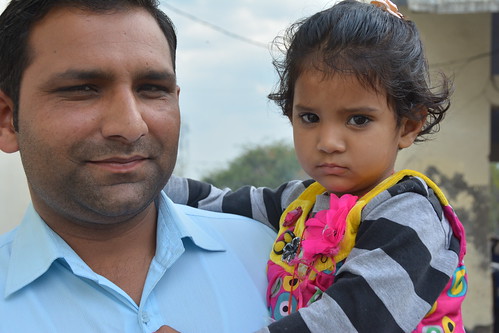 Sanjiv and his three-year-old daughter Mishti, after whom he named his dairy products (ILRI/Susan MacMillan).

Sanjiv has branded his products ‘Mishti’ in honour of his (admittedly adorable) daughter.

But that’s not all. Not satisfied with just processing dairy products and serving his community with various dairy agribusinesses, Sanjiv has started a new venture: highly integrated, conservation-friendly livestock-mushroom farming. He proudly shows us how it all works, how every natural resource is used, how absolutely nothing is wasted. He is obviously proud of how all his knowledge, and that of so many ‘best practices’ in mixed farming and agribusiness, are coming together under his direction here.

So, not a small village, or small ambitions, after all. Sanjiv and his family and his village are moving forward and moving fast. I leave them just hoping that our advanced agricultural research can mange to keep up with them. 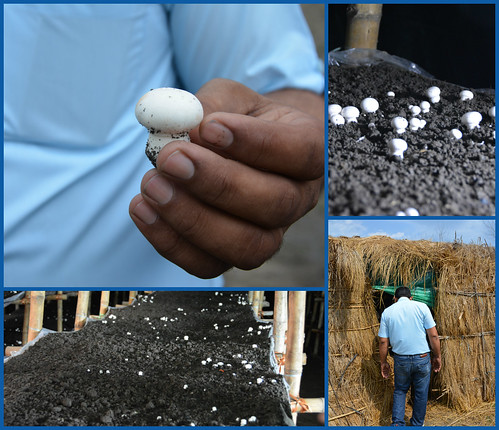 With many thanks to our guide for the morning, Ajay Kumar Yadev, of the National Dairy Research Institute, in Karnal.

Part 3: Culture of the cow: Curds in the city—Better living through smallholder dairying in northern India, 5 Apr 2016.