Note: This is the eleventh in a series of articles on
‘Curds and goats, lives and livelihoods—
A dozen stories from northern and eastern India’.

PART 11: India’s addiction to milk
as a diabetes pandemic moves to the villages

Addiction to milk in India, the biggest milk-drinking country in the world, is only getting bigger amid rising demand for food in this, the world’s second-most populous nation. As reported recently in Bloomberg, ‘Though eating beef is often taboo in India because the animal is revered in Hinduism, the country produces more than 160 million metric tons of milk a year as demand rises for cheese and other dairy products.’

This love of milk was obvious to Jules Mateo, my communications colleague at the International Livestock Research Institute (ILRI), and I as we visited India capital and states of Haryana, in the north, and Odisha (formerly Orissa), on the east coast. Products made of milk are what we ate and were gifted with daily—for breakfast, for lunch, for dinner and for snacks. Always fresh and always delicious. But not an unmixed blessing, we discovered, in this country, where, we heard from scientists at the National Dairy Research Institute (NDRI), in Haryana, that diabetes could affect more than a quarter the population by mid-century. For that reason, NDRI researchers are developing dairy cows altered genetically to produce insulin in their milk.

First, a bit of background on the growing dual problem of mal- and over-nutrition in low-income countries. Here’s how an influential science paper described this global phenomenon in 2012 (emphases added).

‘It is useful to understand how vastly diets have changed across the low- and medium-income world to converge on what we often term the “Western diet.” This is broadly defined by high intake of refined carbohydrates, added sugars, fats, and animal-source foods. Data available for low- and middle-income countries document this trend in all urban areas and increasingly in rural areas. Diets rich in legumes, other vegetables, and coarse grains are disappearing in all regions and countries. Some major global developments in technology have been behind this shift. . . .

‘Most of the global increases in animal-source foods have been in low- and middle-income countries. For example, India has had a major increase in consumption of dairy products and China in pork and eggs, among others.

‘Despite substantial economic growth, large inequalities remain in many low- and middle-income countries, and it is common to see problems of underweight, stunting, and micronutrient deficiencies side by side with increasing rates of obesity. . . .

‘A challenge for programs and policies is the need to address food insecurity and hunger without adding to the burden of overweight and obesity.’ 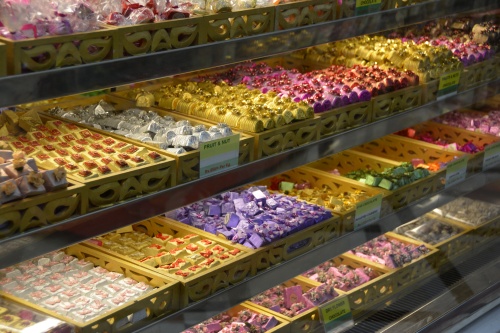 Milk and other sweets for sale at a popular sweet shop in New Delhi (photo credit: ILRI/Susan MacMillan).

And here’s how a health organization recently described how this problem is manifesting itself in India (emphases added).

‘India has the largest number of people with diabetes in the world. According to the International Diabetes Federation, the number of diabetics rose from its already high 1995 rate of 19 million to over 62 million in 2011. An estimated 11% to 20% of India’s urban population has diabetes, and 3% to 5% of the adult rural population has the disease. Estimates from the World Health Organization say that the disease currently costs India about $250 billion per year, and that in the next ten years this figure will skyrocket to $335 billion.

‘Clearly, India has a diabetes problem. But the real issue is that it’s a predictor of a growing global problem. According to the International Journal of Diabetes in Developing Countries, the alarming increase in diabetes “has gone beyond epidemic form to a pandemic one.”

‘India is just the “canary in the coal mine,” warning miners of dangers they cannot see. The rise of diabetes in India is being seen by health experts as a precursor of what we can expect to see happen all over the world in coming years.’

One of many ice cream brands for sale in Haryana, India (photo credit: ILRI/Susan MacMillan).

‘Because most of the newly-diagnosed cases in India are of Type 2 diabetes (formerly called non-insulin-diabetes), the root causes there are the same as they are in America—poor diet overloaded with fat, sugar, and calories, obesity, stress, and a sedentary lifestyle, in which people don’t get enough exercise. . . .

‘It has also been triggered by the large-scale importation of a Western lifestyle. Everywhere you go in India, you see roadside stands and carts selling sweets and samosas and pakoras deep-fried in “bad fats.” These vendors compete with fast-food franchises selling Western-style hamburgers and french fries. . . . 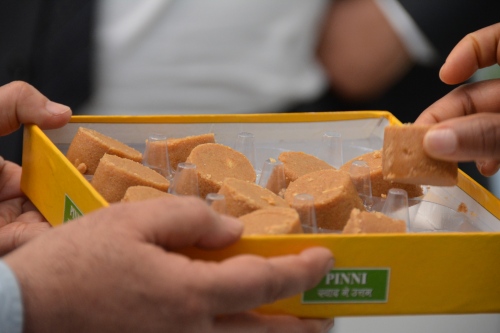 Milk sweets, for those who can afford it, is a gift for daily occasions (photo credit: ILRI/Susan MacMillan).

‘The result of all of this is that the diseases related to diabetes—hypertension, kidney failure, retinal damage, and ulcers—have also skyrocketed. And it’s all because India’s base standard of living has improved. People who were considered poor a few years ago had a diet driven by necessity, but which was relatively healthy—beans, rice, and vegetables. Now most people can afford the fast foods and processed foods, and their diets have become the same as those in the upper middle class, containing far too much sugar, fats, and “empty calories.”. . .

‘In the West, the onset of Type 2 diabetes is most commonly seen in adults in their 40s and 50s. In India, it’s affecting people in their early to mid 20s.’

—Excerpted from HealthGuidance.org, The diabetes epidemic in India: A vision of the world’s future, by Juliette Siegfried, a health communications professional.

‘Two years after Kentucky Fried Chicken (KFC) announced that it will sell more vegetarian burgers in India, it is looking back at chicken in a big way. As competition in India’s burger market heats up, fast-food chains are returning to what they know best—in KFC’s case, tubs of fried chicken—leaving the vegetarian menu as it is, for now. . . . In the last six months, the fast-food chain has already rolled out three big marketing campaigns for its new chicken launches, including the Chizza which is fried chicken slathered with cheese.’
—Quartz India: KFC is ditching Indian vegetarians to do what it does best: sell fried chicken (25 Jul 2016)

The Times of India and Public Health Foundation of India report that:

The paper goes on to report that the number of diabetes cases in India is expected to reach 101 million by 2030. By the year 2050, it is estimated that every fourth Indian will be diabetic, with India becoming the diabetes capital of the world.

Read previous parts in this blog series: Curds and goats, lives and livelihoods—A dozen stories from northern and eastern India