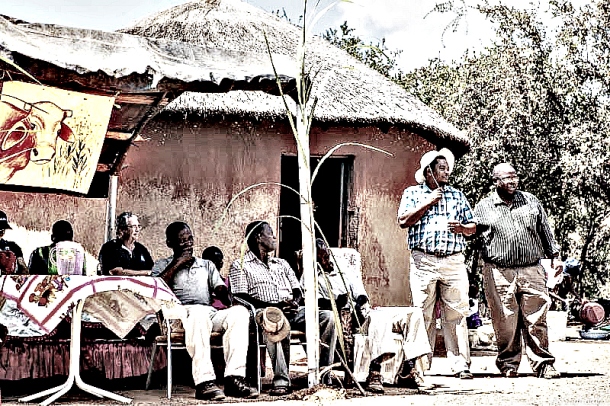 Waiting to start a ZimCLIFS meeting with farmers in Nkayi, a district in Matabeleland North, a province in western Zimbabwe (photo credit: Swathi Sridharan/ICRISAT).

Partners and funders of a research-for-development project in rural Zimbabwe called ‘ZimCLIFS’ yesterday (18 Sep 2017) convened in the capital, Harare, to take stock of how small-scale mixed crop-and-livestock farmers improved their food and nutritional security and their livelihoods in four main districts (Goromonzi, Murewa, Gwanda and Nkayi, from 2012 to 2017) and in two spillover districts (Mutoko and Uzumba, from 2015 to 2017).

‘Most rural people in Zimbabwe depend on crop-livestock farming. They grow maize, other cereals and legumes and raise goats and beef or dairy cattle. When the project started, in 2012, food deficits were commonplace and opportunities for generating incomes were limited in rural areas’, said Sikhalazo Dube, the project’s coordinator, who also serves as the southern Africa regional representative for the International Livestock Research Institute (ILRI).

‘Better integration of crop and livestock production and improved market functioning has led to increased agricultural production, which in turn has improved food security, increased incomes and enhanced the resilience of communities most vulnerable to food insecurity in rural Zimbabwe’, he added.

Through the project, assisted by the Australian Aid Program through the Australian Centre for International Agricultural Research (ACIAR), farmers have diversified their sources of incomes, through the forage value chain and increased incomes through sales of quality crop and livestock products.

An estimated 170,000 farmers benefitted from the ZimCLIFS project. Livestock feed production for subsistence and commercial production was improved through increased use of forage legumes (lablab/mucuna) and higher quality residues (e.g. groundnut stover and fertilized maize). In pen-feeding demonstrations, the net-profit for beef production increased by 7–10% when farmers used mucuna-based supplements. This generated bigger incomes from livestock sales. In Nkayi, for example, farmers reported prices per steer rose from about USD400 to USD800–1000. Prices per goat rose from USD20 to USD50–70 for breeding animals. Further benefits reported were from higher milk yields and fewer livestock deaths, including fewer animals lost to predators, due to home-based feeding systems.

Participating farmers who employed conservation agriculture methods and practiced rotations of cereals and legumes reported that they improved their household food security. Across all the years of this project, these farmers’ crop fields yielded higher gross margins than conventional plots, where the crops were not rotated. Planting a maize crop after a (nitrogen-fixing) legume crop in the second season produced the highest gross margins, averaging more than USD600, compared to planting a second maize crop after the first. The farmers further benefitted from the bigger incomes they got from selling their excess harvest. The overall benefits generated in these systems came particularly from the practice of feeding livestock home formulated rations and expanding legumes in cereal-based systems.

In addition, project staff ran training programs to help the farmers increase their bargaining skills, which led to increased incomes from crop and livestock sales. Project-supported multi-stakeholder platforms increased understanding among relevant actors of the quality needed by buyers, of market prices and of the timing of markets as well as improved productivity achieved with support from agricultural extension personnel. Project staff also helped establish market links with private companies (e.g. seed, abattoirs, processing, fertilizer and machinery). Finally, the participating farmers were able to organize themselves in groups so that they could buy their inputs cheaper in bulk or sell their livestock as a group for greater profit.

ZimCLIFS sparked the formation of productive partnerships among private and public institutions, which united to support farmers in the project areas, and stakeholder platforms, which facilitated regular dialogues, knowledge sharing and capacity building. The increased incomes and enhanced farm household food security observed in the past few years are major results of many concerted collaborations between farmers; CGIAR centres including ILRI, CIMMYT and ICRISAT; development agencies such as the Community Technology Development Organisation and the Cluster Agriculture Development Services, Help Germany, Catholic Relief Services-Zimbabwe and SNV); agricultural extension services (AGRITEX); the Department of Livestock Production and Development (DLPD); Matopos Research Station; and the Rural District Councils.

These ZimCLIFS partnerships addressed site-specific challenges and took advantage of opportunities in the project’s targeted value chains—maize-legume, dairy-beef-goat, maize-sorghum-legume and goat systems—in both high- and low-rainfall areas. Several cereal and legume crop-and-livestock technologies were smartly integrated, yielding synergistic benefits. The ZimCLIFS project has demonstrated the many opportunities that exist for crop-livestock farmers to increase their production and incomes from sales of surplus produce. Households can then use their increased cash to purchase grain in times of need.

The scaling out work should continue in the participating districts and beyond, and the links established with other countries in the Southern African Development Community, such as Malawi, Mozambique and Swaziland, should continue. In some districts, ZimCLIFS activities have already been mainstreamed into crosscutting government schemes such as Zimbabwe’s Command Agriculture scheme, loan schemes, safety nets and nutrition programs.

About ZimCLIFS
‘Integrating Crops and Livestock for Improved Food Security and Livelihoods in Rural Zimbabwe’ (ZimCLIFS) is a project working to strengthen synergies in crop-livestock farming systems in four districts in Zimbabwe. The project is funded by the Australian Aid Program through the Australian Centre for International Agricultural Research (ACIAR). It is implemented by the International Livestock Research Institute (ILRI) (lead agency) in collaboration with the International Maize and Wheat Improvement Center (CIMMYT); the International Crops Research Institute for the Semi-Arid Tropics (ICRISAT); Australia’s Commonwealth, Scientific and Industrial Research Organisation (CSIRO) Ecosystem Sciences; the University of Queensland; two Zimbabwean non-governmental organizations, the Community Technology Development Organization (CTDO) and the Cluster Agricultural Development Services (CADS); and several departments within the Zimbabwe Ministry of Agriculture, Mechanization and Irrigation Development.

Read more about this project